Stories from the ships

We take a peek at Greek migration stories in Recalling the Journey II, an upcoming publication bringing together accounts of arrival in Australia from families spanning 14 cultural heritages 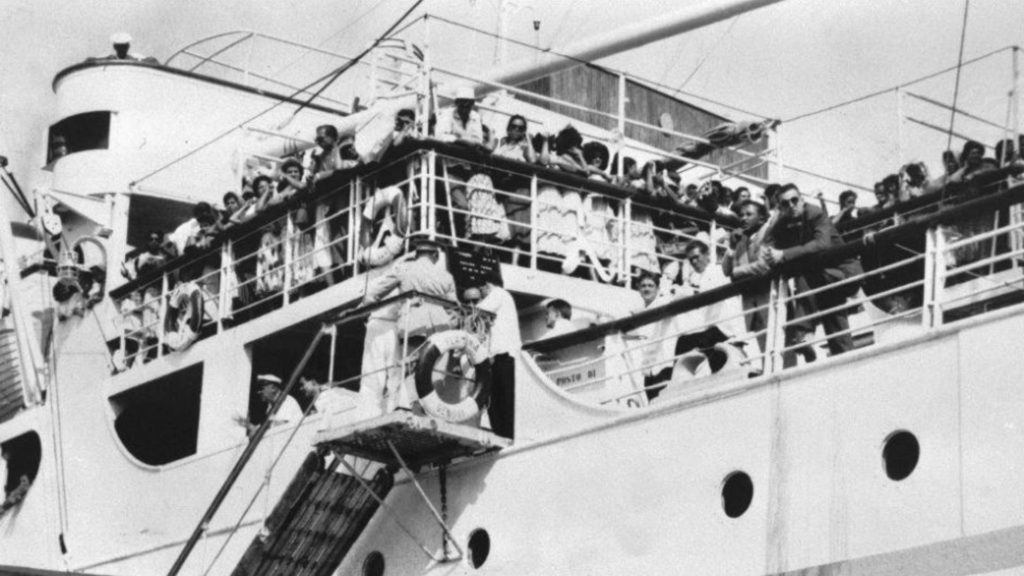 Salome Argyropoulos’ father, Anastasios, made his way to Australia aboard ‘Flaminia’ in 1959. The ship was in such poor condition that as soon as it reached the Port Melbourne pier, it was seized by authorities. Photo: State Library of South Australia

Modern Australia is a country inundated with migration and displacement stories, yet many of those remain absent from the annals of its history; their memories kept alive within the hearts of those lucky enough to have heard firsthand accounts from their family members.

Recalling the Journey II is a project that aims to turn some of those hidden gems into public knowledge.

The publication, sustained by executive editor Lella Cariddi, forms part of the ongoing documentation of migration stories under the auspices of Multicultural Arts Victoria and has been supported by the City of Port Phillip through the Cultural Development Fund.

Twenty-seven family accounts spanning 14 cultural backgrounds are brought together in an e-book, which, at first glance, appears to be a collection of mini-biographies of people who made the long journey to Australia, starting from the 1850s up to 2012.

But every ‘ship story’ seamlessly reveals aspects of events that changed the course of history, such as the Asia Minor Catastrophe, the plight of the Palestinian people, or the displacement from former Yugoslavia.

Meeting ‘memory keepers’, whose roots belong to Bosnia, China, England, France, Greece, Holland, Iran, Italy, Kurdistan, Malta, Palestine, Taiwan, Turkey, and Ukraine, the reader is also given a taste of the social history at the time and place of each family’s migration route.

The common thread in this diverse compilation is the adventurous spirit and resilience of those who moved across borders in search of a better future for themselves and their offsprings.

Importantly, taking a closer look at these journeys of gritty courage with people struggling to accommodate ‘the new’ while mourning ‘the old’ and still managing to look ahead with optimism, we are invited to reflect and maybe rethink our response to immigration to Australia today.

The e-book Recalling the Journey II will be launched in Melbourne in the coming days, in a special event where attendees will have the opportunity to meet the authors in person and listen to some of the readings.

Ahead of the event, Neos Kosmos was privileged to have access to three manuscripts of stories included in the publication, lovingly composed by second- and third-generation Australians of Greek origin – Salome Argyropoulos, duo Sophia Xeros-Constantinides and Miria Capbel, and Con Pagonis.

Each of the contributing authors provide fascinating details about their family’s evolution from the places of their ancestral origin to their Australian experiences.

ABOARD A DILAPIDATED SHIP’S VOYAGE TO AUSTRALIA
Salome Argyropoulos recounts the story of her father Anastasios’ migration journey in 1959 on a ship that was in such a derelict state that the moment it hit Australian shores it was seized by authorities.

Anastasios’ decision to head down under was prompted by his desire to escape poverty. He was raised in small village Simantra in Chalkidiki and only moved to Thessaloniki when he reached adulthood to learn a trade.

Leaving behind his 22-year-old wife, Despina, and toddler son Jim, who would join him later, he set out for the land of plenty, following the same path that his brother Chris had made four years earlier.

Starting a life from scratch in a country at the other end of the world was not meant to be a walk in the park, but little did Anastasios know that the journey there, would be an adventure on its own.

“He travelled for 33 days on the Italian ship Flaminia, which was so old and dilapidated he and the friends he had made whilst on board thought it would sink any day,” writes Salome.

Through his daughter’s manuscript, we learn about Anastasios’ efforts to find money after his minimal savings were drained in the first week of the trip and his rivalry with the Greek captain, who was jealous of his popularity among young women passengers.

Upon arrival in Australia, his experiences were also typical of many migrants’ reality at that time, from landing his first job at General Motors to the funny anecdote of sharing a tiny bungalow with a friend who could not tolerate his loud snoring!

In a side story, we also get to read his wife’s, Despina, recounting of the trip she made two years later to join Anastasios with their son.

And it is impossible to overlook that within a few lines taken from this brief extract, Despina manages to capture the life in the new country as it unfolded not only for her, but also for thousands first generation Greek migrants.

“Our plan was to stay in Australia only for a few years, earn enough money to last us for a lifetime, and then return to our beloved motherland, Greece. However, this was not how things turned out. We had three more children, and ended up making Australia our home.”

THE ANCESTRAL HOME OF SMYRNA – THE ‘JEWEL OF THE EAST’
For Sophia Xeros-Constantinides and Miria Cambel (nee Mirianthi Kassianides – ‘Cass’) the cosmopolitan centre of Smyrna in Asia Minor (present-day Izmir in Turkey) bears a special significance as the ancestral home of their maternal grandparents.

In the jointly written story, the literary duo provides us with rare insights into the historical city’s rich culture and vibrant life.

The area surrounding this “prosperous port and merchant township” was where both families, Bayliss and Evdokia Xeros (Sophia’s grandparents) and Aristides and Anastasia Kampaklis/Campaclis-‘Camp’ (Miria’s grandparents) had been settled for generations.

They describe it as a melting pot of civilisations, “inhabited by Greeks, Armenians, Levantines, French, Americans, Turks, Christians, Jews, and Muslims who coexisted in a respectful and tolerant manner.”

Sophia’s grandfather, Bayliss, owned a wine shop in the Greek quarter, while Miria’s Aristides was a merchant running a taverna on the waterfront.

In an account intertwined with literary imagination, the two authors describe the social life for the women centred around the Greek Orthodox Church and Smyrnean cuisine, and they paint the picture of an idyllic life for locals.

“On balmy evenings, couples and families would promenade along the picturesque waterfront with its impressive neoclassical architecture, conversing with others and enjoying a life of plenitude,” they write.

All this would come to an end with the sacking and burning of Smyrna in September 1922 and the ensuing refugee crisis.

The Xeros and Kampaklis families were among those lucky enough to flee before the catastrophe, thanks to being warned by Turkish friends and acquaintances.
But it would take long before life would be easy again.

“In Athens, our grandparents, as refugees from Asia Minor, were made to feel unwelcome, and local Greeks called them xeni (foreigners) even though they were Ionian Greeks.”

A few years later, the two families would make the decision to emigrate to Australia boarding the Italian ship MS Carignano from Piraeus to Melbourne.

We learn about the struggle of the two families for survival during the Great Depression, their hardships and losses, as well as of the periods they lost contact before being reunited again.

Evdokia and Anastasia, Sophia’s and Miria’s respective grandmothers, are featured as remarkably strong and hardworking women, whose support for each other was next to none.

The Xeros and Kampaklis families would spend the rest of their lives in Australia but nothing could erase the love for their ancestral home.

“Under the stars, our grandparents recalled the homeland by giving voice to the lamenting rebetika[…]”

As the authors conclude ,this story of “courage and survival precipitated by the need to escape danger and persecution” serves as a reminder of the sacrifices the two families made to “build for themselves and their children a future of possibility”.

SOUTH MELBOURNE: AN ENCLAVE OF GREEKS WITH LINKS TO ALATSATA
Con Pagoni’s story adds yet another layer to the accounts of Greek Australian migration, taking the reader on a journey from the township of Alatsata – within the broader province of present-day Izmir (Smyrna) – to Chios, Cairo and post-WWI South Melbourne, where his mother, Helen Kathleen, grew up.

Helen’s mother Argyro, was born in Alatsata in 1887, but was spared the immediate trauma of the forced population exchange when Mustafa Kemal Atatürk regained control of Smyrna in 1922, as she was living in Cairo with her sisters at the time.

Argyro’s father Manuel Samaras, had fled to Greek island Chios, close to the Turkish coast, where Argyro reunited with him until he passed on shortly after.
Her return to Egypt, where she met and married Constantine Diakakis, Helen’s father, would be followed by the couple’s decision to sail to Australia in 1924, settling in South Melbourne.

Con’s mother Helen would be born during the Great Depression years in Australia, with the hardships of the era taking their toll on the family, while her father would die after a long illness when she was merely 15 years of age.

“As was the custom, following her husband’s death, Argyro wore black for the rest of her life, including a traditional headscarf […]. His death left mother and daughter without family in Australia; their only relatives were in Cairo and Boston, and correspondence was only with the relatives in Boston.
“These circumstances brought mother and daughter closer together and the bonds became stronger with the passage of time”, we read in Con Pagoni’s manuscript.
Con goes on to describe his grandmother’s unconditional love and support for his mother while Helen was growing up in South Melbourne regarded as “an enclave of Greek Australians from Alatsata.”

Members of this close-knit community would often be suspicious of Argyro, seeing her as “somewhat eccentric”, but at the same time she “was held in high esteem by other Greek people who frequently came to her for advice and counselling.”

“Many Greek women, whose most common problem was husbands who spent their days and nights gambling in kafenia (Greek coffee clubs), owed the survival of their marriages to the sound advice they received from her.” Con writes.

The reader follows Helen throughout her youth, her marriage to Con’s father Nicholas Pagonis, as well as her dedication to charity work, which led her to being a leading volunteer with Fronditha Care for over 20 years.

But most importantly, we sense the indelible mark of her cultural heritage in every aspect of her life, from her hardworking spirit and her generosity in interactions with friends and relatives, to the love she cultivated for needlework and handicrafts, just like her mother.

This rich and diverse cultural heritage, drawing on Argyro’s links to Minor Asia, Egypt and Greece and passed on through generations to her grandson Con is the foremost element celebrated in the story he authors.

* The book launch of ‘Recalling the Journey II’ will be held on Tuesday 7 August at the Theatrette – South Melbourne Town Hall (208-220 Bank St, South Melbourne, VIC) 11.00 am – 2.00 pm. The event is free, but confirmation of attendance is required. Those interested in attending can RSVP by 31 July, emailing the publication’s executive editor Lella Cariddi at lella.cariddi@multiculturalarts.com.au