Never before have the white-washed Greek villages cascading down hillsides and the sparkly waters of the Aegean been more accessible. Even as the country deals with a financial crisis, its tourism industry is filled with new developments that allow travellers to enjoy a hassle-free vacation at affordable rates.

A special ceremony was held on Sunday at the Turkish port in Çeşme to launch the new ferry service on the ‘Kaunas’ between the Çeşme District and the Lavrio Port in Athens.

The route takes seven hours, with a one-way ticket starting from 55 euros, and runs six days a week departing from Lavrio on Monday, Wednesday and Friday, and from Çeşme on Tuesday, Thursday and Saturday.

According to reports, the new ferry route was scheduled to commence on 2 June, but was delayed due to bureaucratic obstacles. It is expected to boost tourism, as well as creating a more affordable pathway for cargo carrying vehicles from Turkey to Europe.

“The line will not only boost the region’s economy but it will also provide significant convenience for expatriates as well as tourists,” Bülent Ipek, Board Chairman of the Turkey-based company Aegean Seaways told Daily Sabah.

NEW AIRPORT
Mykonos is becoming an increasingly popular tourist destination each year, and Fraport Greece has announced it will be investing in the island to keep up with demand.

Fraport Greece is investing 25 million euros (AU$40.5 million) to build a new airport on the island.

To fit in with its surroundings, the building will be designed keeping in mind the aesthetics of traditional Cycladic island architecture and character, according to a report by ANA.

If all goes to plan, the new airport will be completed sometime in 2021. 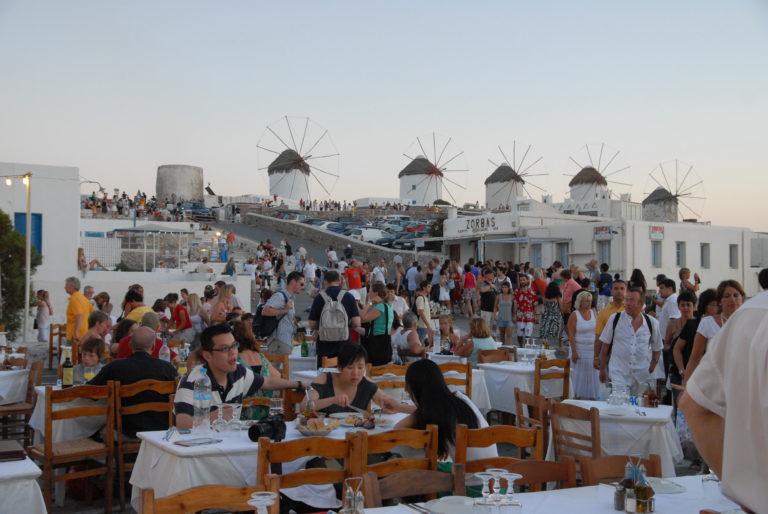 It will be larger than the current airport, extending from 10,000 to 12,000 square metres, and will have 16 check-in desks and seven boarding gates.

According to a presentation by Fraport Greece, they expect to see two million passengers come through the new airport in 2026 – a significant increase from the 1.3 million people who currently come through the airport annually.

READ: Jetting off to Greece soon, or planning to? Here’s how to avoid hidden costs

NEW FARES
Ellinair, an airline belonging to the Mouzenidis Group, has announced three new ways for passengers to travel economy according to their budget:

Each service can be purchased separately and passengers can add onto the Basic option even after their ticket has been issued to allow for additional flexibility.

NEW FLIGHTS
Ryanair announced that it would include two new flights connecting Greece to Hungary and Poland on its schedule. The new routes are from Preveza-Aktio to Budapest every Monday and Kavala to Poznan in Poland every Wednesday.

The airline estimates that it will transport 5.6 million passengers in 2019 and support over 4,200 jobs in Greek airports.

NEW AIRCRAFT
Aegean Airlines is making long-term plans to give the carrier increased flexibility. In an effort to strengthen its position, management discussed the funding of new aircraft delivery with the provider’s creditors. Competition with its main rivals in the domestic market (Sky Express, Volotea) has peaked.

NEW SERVICES
Natives of Chania, Kalamata and Preveza living in London had reason to celebrate this year when British Airways increased its flights last month from London Heathrow to Greek airports from two to three per week. These remain into effect until early October.

READ: You can get paid to live on an idyllic Greek island

NEW EXPRESS TRAIN
The wait ended in May as the highly anticipated express train on the Athens-Thessaloniki line was launched.

Now, instead of taking five hours to get from one city to the other, passengers will be able to reach their destination in just three hours and 55 minutes.

The express trains feature all necessary amenities to ensure a convenient and relaxed trip, including WiFi.

The routes are initially being carried out by three TRAINOSE trains coaches, set to be overhauled by EASTY. The ultra-modern express trains will run daily, with two stops – one in Lianokladi and the other in Larissa.

NEW E-TICKETS
The Greek Ministry of Culture announced an upgraded e-ticket that would include a number of new sites and museums across Greece, improving the overall tourist experience.

Furthermore, visitors to the Acropolis who have purchased tickets online from etickets.tap.gr will be able to gain immediate entry through newly-introduced fast lanes. Ticket machines will be installed at the site for faster access.