Archbishop Makarios: ‘GWC and its members are a ‘Workshop of Holiness’’ Archbishop Makarios meets with people of the GWC Community Services.

The Greek Welfare Centre’s (GWC) Community Services, an arm of the Greek Orthodox Archdiocese of Australia, received His Eminence Archbishop Makarios on his first official visit to the Centre on Monday 22 July at the organisation’s Regional Office located at The Millennium Centre at Brighton Le Sands.

Archbishop Makarios was warmly welcomed by members of the Administrative Committee, the director, staff and volunteers.

It was very moving when His Eminence was greeted by a large group of young children and parents from GWC’s Playgroups. They sang nursery rhymes in Greek and threw rose petals before His Eminence. Archbishop Makarios responded by sprinkling rose petals on the children’s heads and offered them small icons.

The event began with a welcome message by GWC Deputy Chairman Ulysses Coustas, who represented the Administrative Committee. Following the welcome, GWC Director Steve Magdas addressed the archbishop as well as staff members and volunteers present. He spoke of the early years, the struggles and the establishment of the Centre, he highlighted the overarching mission of the Centre and mentioned the multitude of services and programs which are organised for the community. 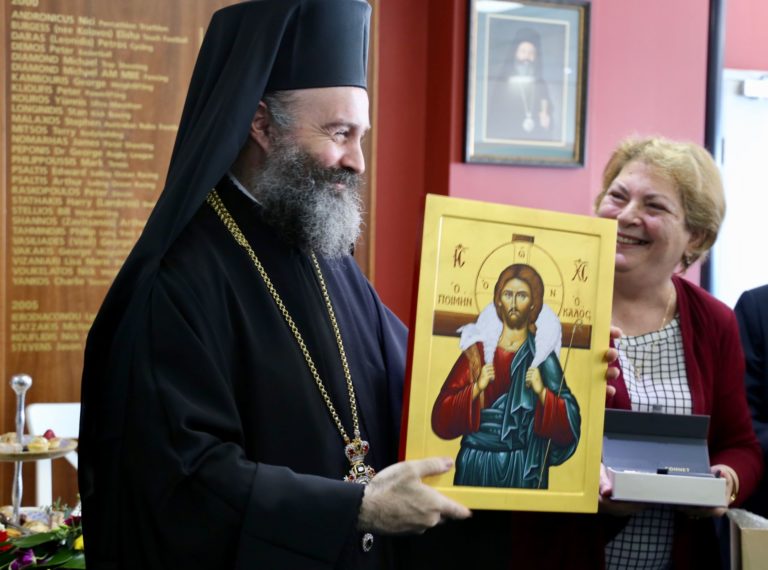 “The essence of GWC Community Services is to serve with the compassion of Christ,” Mr Magdas said.

“Every effort is made to ensure that every task undertaken by the staff is motivated by love and respect for the individual, but at the same time with understanding and appreciating the principles given to us by science and sociology.

“You are our Leader and Father. It is our desire and principle for GWC to function within Greek Orthodox ethos, framework and ideals.”

His Eminence Archbishop Makarios then addressed the meeting, telling those present that he was deeply moved by what he had heard and seen. He thanked everyone, emphasising that the work of the GWC “is unique not only because we serve people, but because we serve within the context of the Church, and the person within the embrace of Church takes on special value, as the human being is the image of God for us. “What we offer as an organisation to children, parents, the elderly, is not merely humanistic support. What the Church wants from us is to offer Holiness…

“For us, the Orthodox Church, we ensure that the government programs are accompanied by a fundamental purpose that is eschatological, which means that we help people to overcome their problems by having faith in Christ.

“That is why I do not consider you to be simply a welfare organisation, but a ‘Workshop of Holiness’,” Archbishop Makarios said.