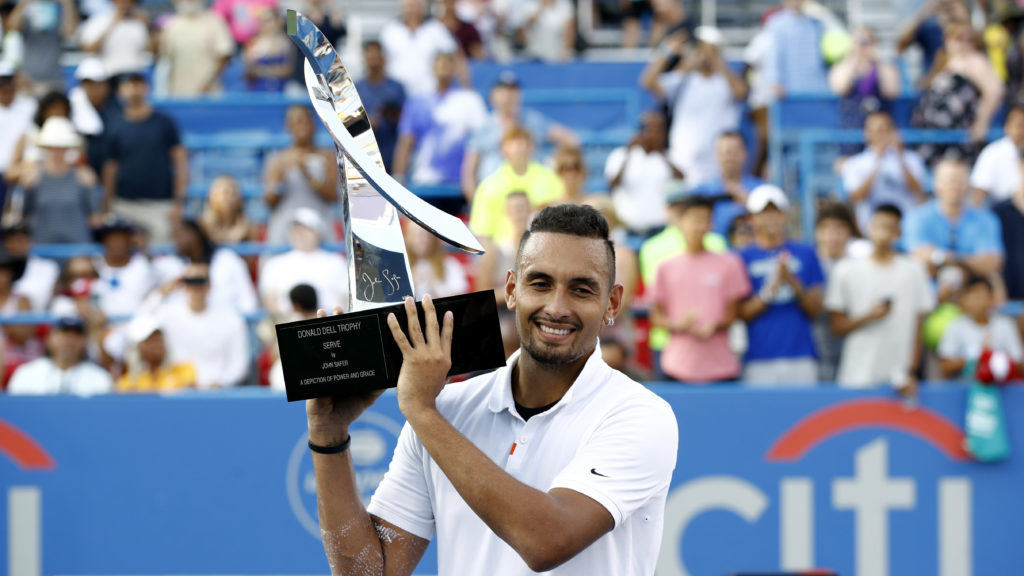 Nick Kyrgios poses for photos with a trophy after defeating Daniil Medvedev of Russia in a final match at the Citi Open tennis tournament on Sunday 4 August in Washington. Photo: AAP via AP/Patrick Semansky

Nick Kyrgios has won the men’s final of the Washington Open, his second ATP Tour 500 series title win of the year.

Despite having a back injury, for which Kyrgios received treatment before the start of the second set, he held his nerve, firing ace after ace, sending 18 in total his opponent’s way.

The win follows on from his semi-final victory against Greece’s Stefanos Tsitsipas.

Commenting on his performance after the match, Kyrgios said that it has been “one of the best weeks of my life from a tennis perspective”.

“Where I was six months ago, some of the things I was doing, to respond like this having incredible support, it’s amazing.

“I’ve proved to myself and a lot of people that have backed me that I still have it.”

As a result of the win, Kyrgios takes home A$537,830 and will rise 25 spots to world No. 27 when the rankings are updated on Monday, putting him in good stead for a seeding at the US Open later this month.

If Kyrgios is successful against England’s Kyle Edmund in his opening round of the Montreal Masters, he will come up against Medvedev again in a few days time.