Greek trip of a lifetime for Melbourne students of Oakleigh Grammar Oakleigh Grammar students were excited to be in Greece. Photo: Supplied

Students of Oakleigh Grammar experienced a trip that would certainly be remembered and etched in their hearts forever.

Twenty five Year 8 and Year 9 students participated in a 3-week cultural trip with four teachers. The purpose of this trip was experiential learning with a focus on hellenic culture, tradition and Greek hospitality.

Students that participated in the trip were from both Greek and non-Greek speaking backgrounds. Some students had never visited their parents and/or grandparents’ homeland which made the trip all the more sentimental for them.

In a Mediterranean setting and perfect weather conditions, we were greeted with open arms and welcoming smiles. After a very long and much anticipated journey, Father George Adamakis, our parish and school priest greeted us in Athens before everyone fought of the jet lag. We eagerly explored the city centre and took in the beauty of Plaka whilst being in awe of the Ancient Agora, Roman Forum and Syntagma Square all lit up at dusk.

Visits over the next few days included: the Metropolitan Cathedral of Athens, Monastiraki, the Parthenon, the Acropolis Museum, Likavittos Hill, Kalimarmaron Stadium, the Byzantine Museum, the Hellenic Maritime Museum, the Stavros Niarchos Foundation Cultural Centre, the Commonwealth War Cemetery, and a few hours of swimming at Lake Vouliagmeni.

Admiring the majestic sunset at Cape Sounion whilst taking memorable photos of the Temple of Poseidon perched on the cliff edge, we were transported to another world.

In the Peloponnese, we got to experience the excellent acoustics of Epidavros, and heard Father George sing a verse of the Axion Esti whilst being applauded by everyone in the theatre.

Daily excursions included visits to Nafplion and the Saronic islands: Hydra, Poros and Aegina. We had the chance to walk through the small and picturesque alleyways and take photos with the island’s famous animals, the donkeys, which are also the main mode of transport on the island.

In Athens, we had the opportunity to visit the Presidential Guard, follow a formal assembly and dressing of an Evzon whilst learning about the significance of the different uniforms, what they symbolised and we were taken on a very rare tour of the workshops where the costumes are made. Did you know that the tassels on the evzone’s uniform represent tears? Or that the stamping of the feet whilst an evzone marches is supposed to be loud, so that all our war heroes can hear that we remember and honour the sacrifices they made for our freedom?

Another highlight was without a doubt a tour of the Presidential Mansion and meeting Greek President Prokopis Pavlopoulos who welcomed us and spoke at length about how proud Greece is of Hellenism in the diaspora and the ongoing sacrifices and accomplishments that immigrants have made abroad. He also emphasised that children of immigrant families should be immensely proud of the opportunity given to them to learn the Greek language so far from their motherland. We were especially honoured to present Mr Pavlopoulos with our special 35-year Celebratory Edition of Oakleigh Grammar’s Year Book and the gift of a boomerang accompanied with the wish that we return to this beautiful country one day. We were also fortunate to have the Hellenic Parliament opened just for us on a Sunday morning for a special tour and information session on how laws are passed in the Greek Government.

Our next stop was Kalambaka and the beautiful Meteora monasteries. Meteora is the most important monastic centre in Greece after Aghios Oros. Students spent two days reflecting amongst the peaceful landscape of Kalambaka, on the life of the first ascetics and how they devoted their life to a spiritual connection with God. It was certainly well received by all after spending the first week in the extreme Athens heat wave.

On our way to Thessaloniki we stopped in Vergina to tour and view the tomb of Philip II of Macedon, the father of Alexander the Great and view the magnificent waterfalls in Edessa.

An unforgettable highlight of the trip was also being greeted by our sister school the 2nd Junior High School of Thessaloniki. A two-year growing partnership between the schools meant that this dream finally became reality. Students that had participated in correspondence via Skype or the more conventional process of letter writing and exchanging of gifts were going to finally meet their pen pals and long distance friends. Students, staff and families of our sister school came together in the middle of their summer break and held an emotional assembly and gifting ceremony to celebrate our arrival, friendship and partnership. In the true spirit of Hellenic hospitality and philoxenia, students and staff were taken out to dinner and a tour of our beautiful sister city. Our students spent the next few days being toured around Thessaloniki by their new friends and establishing lifelong connections.

READ MORE: Twenty Greek-Australian students about to experience their first Easter in Greece 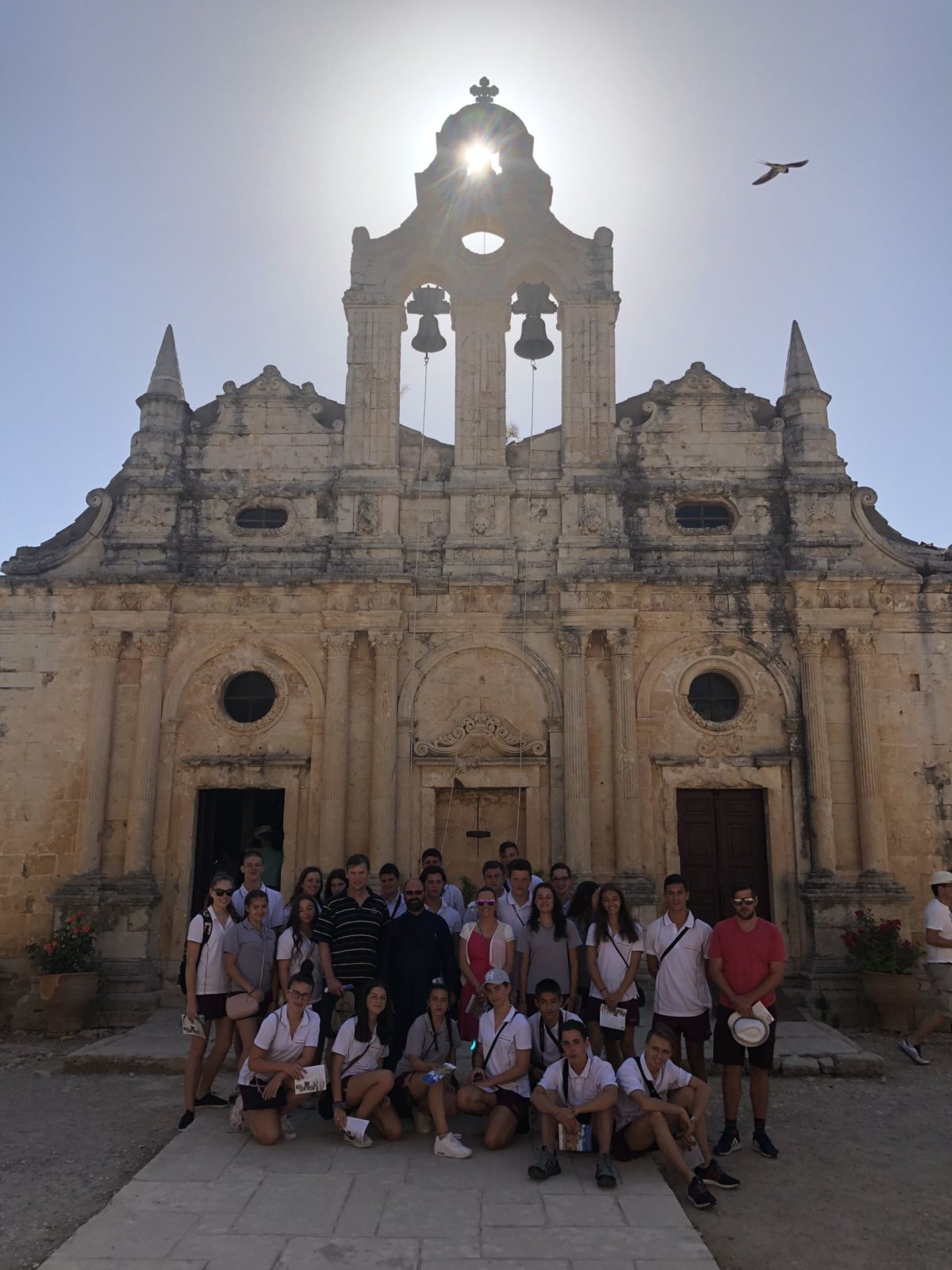 The second night in Thessaloniki we were immersed in true Hellenic Folklore, culture and dancing. “Pefka Greek Dance Academy” situated in the outskirts of Thessaloniki entertained us with a night of traditional food, drink and dancing after first conducting a dance workshop for our students. A traditional ‘glendi’ was enjoyed by all and had us buzzing back to our Hotels. We were certainly not ready to turn in for the night. Our last day in Thessaloniki started with a visit to the White Tower and a meeting with the local deputy Mayor of Tourism, where students posed questions about the city and how it caters for young people, tourists and locals. Questions from our students encouraged some dialogue around strengthening the ties between Melbourne and Thessaloniki through the already existent Sister City Program. There were also questions (on our student’s behalf) on developing opportunities for a student exchange program in the future.

Our last destination…Magical Crete! Well, words can do no justice! We flew into Heraklion and the next day caught an early high speed ferry to Santorini where we visited picturesque Oia and had lunch at Perissa. We swam at the well-known black beach, made of volcanic sand. On our return to Rethymno we were greeted by our very own Principal Mr Mark Robertson who joined us for the remainder of the trip. Together we visited Knossos, Stavros (the beach Zorba the Greek was filmed), the Museum of Natural History, Preveli Monastery and Arkadi.

Another cultural immersion was in store for us.

The student’s visit to beautiful Crete came to an end with a series of traditional Cretan dance workshops that were run by the Tzanidakis Cultural Centre. We were welcomed with Cretan delicacies upon arrival and learnt the following dances: Chaniotiko Sirto and Sigano (Rethymniotiko and Hrakliotiko).
The last few days in Crete found us indulging in local delicacies and enjoying our flavoursome Greek and Cretan Dakos salads. A perfect end to perfect trip in a perfect destination. An equal balance of experiential learning and much needed time out!!

Do you have a story to tell? Neos Kosmos welcomes news from the Greek diaspora around the world. Send us your news, photos from events, and share personal moments from your life that you would like us to publish. We also welcome dialogue on robust dialogue, however the views and opinions expressed in Letters to the Editor or the Opinion pages of our newspaper and website are those of the authors and do not necessarily reflect the official position of the publisher. Send your stories, opinions, interesting photos you’d like to share with us or story suggestions to mary@neoskosmos.com.au The newspaper reserves the right to edit contributions.