The Aussie bar under the Acropolis

The Athens Sports Bar has become a gathering spot for many Greek Australians living in the capital, not only because it is located right in the heart of the city, but also for the many events it hosts year round The Athens Sports Bar holds many events for the large Greek Australian community in the capital, and has even established a relationship with the Embassy. Photos: Facebook

The AFL Grand Final between Richmond and GWS was seen by hundreds of thousands of people. Those who were not fortunate enough to attend the event at the MCG had to settle for a TV set, a refreshment and the loud noise of their local pub.

And then there were those who were hundreds of miles away, yet felt the need to support their favourite team even though they were in a land where such a thing as AFL is a foreign concept.

If you were anywhere near the greatest landmark of Athens, the Acropolis on the day of the Grand Final, you would most likely be able to hear the sounds of passionate Richmond fans. And if you were to follow the sounds, they would have led you just a few streets away from the Acropolis Museum and the entrance of the nearby metro station, to what many Aussies have come to consider ‘their place’: the Athens Sports Bar.

The name may suggest that this is a hot spot for football fanatics, but it is so much more.

Established in 2007 by Daniel Fisher, initially as Athens Studios, this location was meant to provide affordable accommodation for Aussie backpackers in a central location of the city.

“The Athens Studios was a precursor to Airbnb in Athens, in the then-not-so-hip Makrigianni/ Koukaki area. As Aussie Greeks we saw a need for budget apartments, studios and beds in the area,” Mr Fisher told Neos Kosmos.

“We had already been doing business with the Athens Backpackers since the Olympics and we loved Greece, its lifestyle and the change of pace from Australia. After we established the Athens Studios, we created a restaurant, laundry and the now landmark Sports Bar as we loved the AFL and sports of all codes, and there was nowhere you could watch live sports in an Alfresco and indoor space with a friendly atmosphere, cold beer and simply good service.”

The bar has been operating for quite some time now, and its popularity has increased to the point of even being recognised by official Australian representatives.

“We are most definitely the go-to place for any Aussies that stumble through the city and also all the Aussie Greeks living in Athens. We have a long-term and strong friendship with the Australian embassy,” says Mr Fisher.

“It’s amazing how many times you see Aussie Greeks that haven’t seen each other for years bump into each other at our bar/restaurant; it actually makes me laugh as you really realise how small the world is and how strong the Aussie Greek bonds are.”

The Bar has been co-hosting an Australia Day party for over 18 years, and also hosts Greek Aussie meets ups, book clubs, karaoke on Thursdays (the longest running in Athens) and also Monday Pub Quiz.

“But people are always just hanging out, so it’s definitely a hub for people to bump into each other. At the end of the day, we think life in Greece is good just because things slow down, you actually have time to live and any relationships you may forge feel very real in many ways. We love that in some small way we help share the love and are in the business of people having fun, meeting new friends and are a part of this amazing community we have created.” 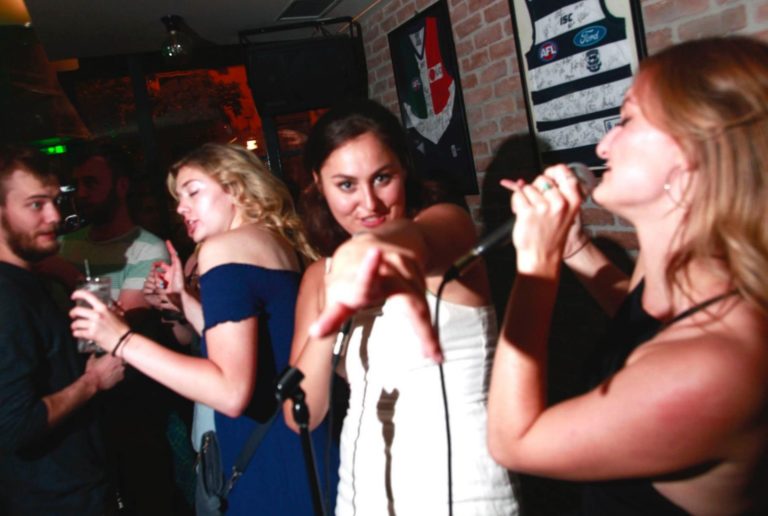 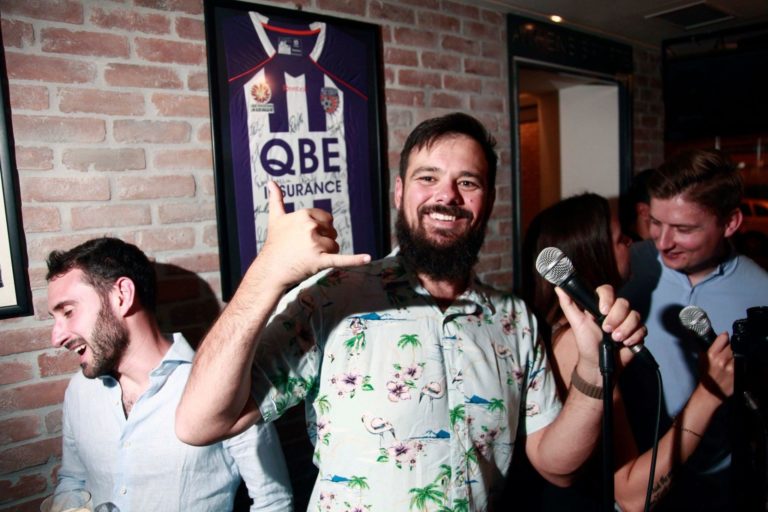 Of course, with the Athens Sports Bar being ideally located almost underneath the Acropolis, and just a few metres away from the newly established museum, it’s only logical that it attracts many tourists, not just from Australia but from all over the globe.

“We have accommodation for over 250 people, so even on quiet nights you will have plenty of travellers hanging out in the little village we have created. Additionally, if you walk two to three minutes up the now magical ‘pezodromio‘ you are at the Acropolis and the new museum. The area has flourished and changed more than you could believe, we think it really is the best part of the city for many reasons,” Mr Fisher says.

Thinking of the bar’s future, he says he would like to show his appreciation toward the wine industry, and create an area where even the smaller vineyards have a place to shine.

“We really want to do a little bar showcasing Greek wines. Not your big boy vineyards like Alpha etc, but all the obscure little battlers that work their butts off and pour their hearts into making wines that are going to redefine Greece as more than just a producer of wines to an exceptional developer on par with the very best in Europe. We truly believe that Greek wines just keep getting better and better. We would love to create a little place where you can taste them, grab a bottle to take to your hotel, drink inside our bar or simply order a case or 50 to be sent to wherever you are in the world,” he says.

No matter what the future holds though, it remains certain that Mr Fisher and his associates will have plenty of Greek Aussie events ahead of them.

If you ever find yourself in the heart of Athens and feeling a little nostalgic for back home, you should definitely head to the Athens Sports Bar to catch the footy on the big screen, have a nice cold beer and, who knows, you might even bump into someone you know! It wouldn’t be the first time it’s happened.