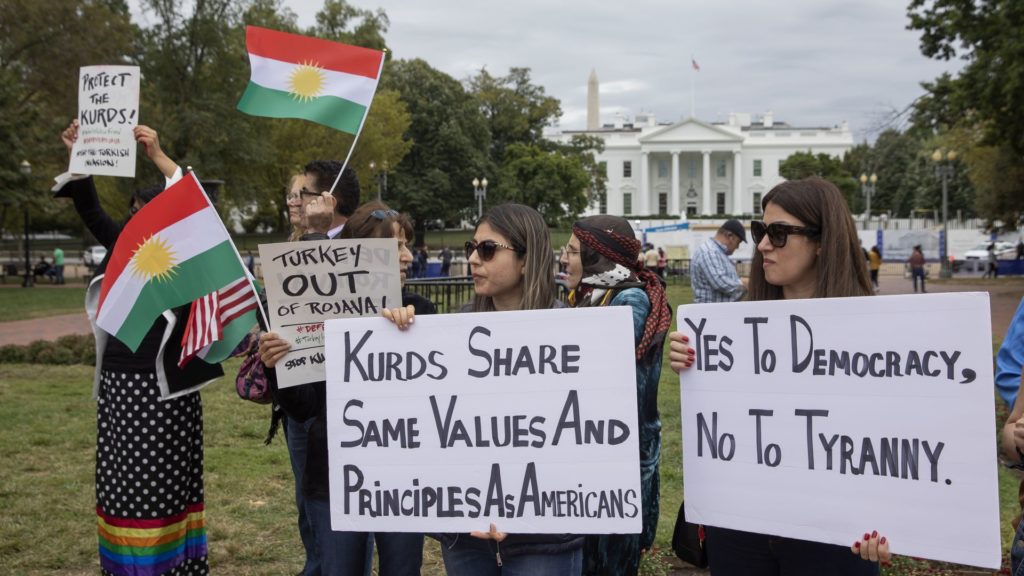 People protest against an expected military incursion by Turkey into Kurdish areas of northern Syria, at Lafayette Square in front of the White House in Washington, DC, USA, 08 October 2019. US President Donald J. Trump announced the withdrawal of US troops from the area ahead of the anticipated action by Turkish President Recep Tayyip Erdogan. Trump also announced a November 2019 White House visit by Erdogan. Photo: EPA/ERIK S. LESSER

US President Trump’s announcement to withdraw troops from the Kurdish lead Syrian Democratic Forces (SDF) controlled part of northeastern Syria is an abandonment of America’s (and Australia’s), Kurdish allies. It gives a green light to Turkey’s undemocratic President Recep Tayyip Erdogan to launch a Turkish military assault on what he sees as Kurdish terrorists.
Trump has being denounced by Republicans and Democrats alike, as well as international allies for his decision. The Jerusalem Post reported that Turkey launched cross-border bombing raids targeting the Kurdish lead Syrian Democratic Forces (SDF).

Sensing the heat, Trump in a series of angry Tweets warned, “…If Turkey does anything that I, in my great and unmatched wisdom, consider to be off limits, I will totally destroy and obliterate the Economy of Turkey (I’ve done before!). They must, with Europe and others, watch over…”

As I have stated strongly before, and just to reiterate, if Turkey does anything that I, in my great and unmatched wisdom, consider to be off limits, I will totally destroy and obliterate the Economy of Turkey (I’ve done before!). They must, with Europe and others, watch over…

The Kurds are our key Coalition allies in the fight against the Islamic State (ISIS). ISIS and their dogma have been directly responsible for deaths of thousands and enslavement of Christians, Muslims, Yazidis. They have guided and inspired terrorist attacks across Europe, US, Australia, North Africa, Middle East and Asia.

Kurdish fighters – men and women – have been responsible for beating Daesh, (ISIS). They freed Yazidi women and girl slaves and brought stability to what was until recently the dystopian ISIS Caliphate. The SDF is also responsible for tens of thousands of Islamic State fighters and their families – many from Great Britain, France, Germany, and some from Australia – whose fate is now uncertain.

Trump in a press conference this week pressured Germany and other European allies to take back former ISIS combatants. He turned the screw on European allies for not paying more for NATO and goaded them to take responsibility for Syria and the Kurds. He washed his hands of the Kurds and made ISIS a Syrian, Turkish and Iranian problem. Allies across the Middle East are concerned with Iraq and Egypt warning that ISIS cells will be reactivating.

The impact on Greece

Greece is nervous as Trump gives his Turkish counterpart carte blanche to invade Syria and operate all the way to the Euphrates River. Trump seems to have forgiven Erdogan for purchasing Russian made AS 400 missiles.

Greece and its Egyptian, Israeli and Cypriot allies are anxious as President Trump authorises President Erdogan in a hypersensitive Eastern Mediterranean. The Turkish president has already raised issues about Greece’s sovereignty in the Aegean and Cyprus’ exclusive economic zone. Turkey may also use Syrian refugees to blackmail Greece and Europe. The EU is mute on the Trump decision as EU nations seek to dampen rising anti-refugee sentiment.

Australia should be very concerned as one of the Five Eyes – Australian, US, New Zealand, GB and Canadian alliance. We were sidelined as a key ally that has followed the US in all its missions – misguided and righteous – since the end of WWII.
Americans may be weary of carrying the burden of the liberal world order and Trump knows that. One of his electoral platforms was the withdrawal from wars that the US citizens felt they were losing.

Trump is an American phenomenon arising from whenever the US retreats into a self-interested isolationism. US isolationism can have terrible consequences, and ISIS is an example. The latest betrayal of the Kurdish lead SDF may have dreadful impact on the Kurds and destabilise a tense South Eastern Mediterranean.

Americans retreated in the late 19th Century from Europe and its colonial bickering. As an idealistic liberal superpower they were forced in 1917 to save Europe by entering WWI ending the catastrophic slaughter of millions. Before President Wilson’s signature had dried on the US initiated League of Nations (a precursor to the UN) a Republican dominated Senate turned their backs on the world again. Two decades later the US was forced out of its isolationism in the global fight against Nazism and Fascism in Europe and Asia in WWII – a war that cost 70 million lives.

Bernard-Henri Levy, founder of Nouveaux Philosophes movement in 1976, on a recent book tour for The Empire and the Five Kings said, “America’s national interest is not respected, unless America acts for values, for its values.” Intervention when premised on the ideals of liberalism as it was in the Balkans in the 1990s and in Europe in WWI and WWII, even when misguided like post 1962 Vietnam we respect the US. Be it stewarded by the GOP or the Democrats that Pax Americana is founded on core values that go beyond self-interest.

However, in neglecting Enlightenment values, Levy argues that America’s latest retreat from the world stage resulted in the rise of five new powers – Russia, China, Turkey, Iran, and Sunni radical groups. These ‘Five Kings’ according to him, are undermining the liberal values system that has been a hallmark of the better part of Western civilisation.

“The Pilgrim Fathers escaped Europe and came to America to restart Europe to make it more faithful to liberal values,” says Levy. Like Aeneas, the Trojan hero and son of the goddess Aphrodite, who left a burning Troy and took on hazardous seas to restart a republic of ideals, so did the early Pilgrim Fathers escaped an authoritarian and intolerant Europe to build in historian David Reynolds’ words an “empire of liberty”.

When America shifts from its liberal moorings, we open the space for tyrants.

Levy sees two Americas, one of Enlightenment values and liberal intervention and the other of pure self-interest. America’s latest expression of self-interest may have deleterious consequences for the Kurds, and all of us.

NATO and the EU may need to step into the breach. The stability of the Middle East and the Mediterranean will otherwise be undermined by consortium of bullies with Turkey’s Erdogan, Syria’s Assad and the Russian Federation’s Putin at the front of the pack. For Australia, Trump’s latest expression of his mantra ‘America First’ undermines the ANZUS alliance and our historic role in the Middle East.