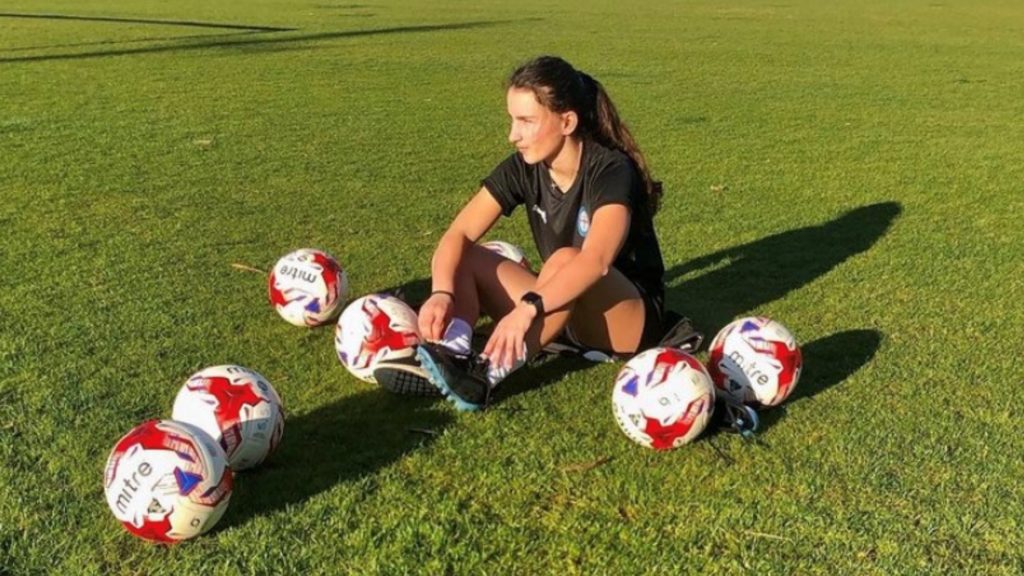 Whether Sofia Sakalis is playing on home soil or out on international fields, she gives every game her all. Her Melbourne City FC team biography describes her has “a creative attacking midfielder with a knack for scoring goals”.

The 18-year-old from Melbourne has had to take some time to heal after an ACL injury put her out of the game for the last season, but has been working hard to get herself back onto the green.

Despite being such a young player on the pitch, Sakalis has already seen a shift in women’s sport in her time.

“When I was younger I would play with boys from the age of five, so there wasn’t even that exposure to girls teams and playing with a lot of girls…Nowadays girls watch women’s sports. I think it’ll just keep improving and keep growing and that’s really exciting to be a part of it as well at such a young age and I’ve still got time to see it grow,” she told Neos Kosmos.

Sakalis does make a point that it was her family that inspired her love for the game, from her father and brother who helped her train, to her mother who would make the long drives to practices and games.

The stellar midfielder talks about finding her inner strength and working towards making it onto the international stage once again.

READ MORE: Q&A with one of W-League’s most promising players, Angelique Hristodoulou

My dad was a coach when I was younger and my older brother, who is three years older than me, was also playing at the time. I would always be in the backyard kicking the ball with them, so from a very young age I was introduced to football.

I think my love for the game started in the backyard with my family so it was definitely my dad and brother who were the biggest influence getting me into the game.

I’m a person that likes to relax, I listen to my music to get in the zone. I like to visualise as well. I think that’s one thing that I’ve done from very young, so like visualising scoring a goal or doing something that the coaches have asked me to do and I feel like that helps me a lot when I’m on the pitch.

I change so much, I don’t really have a specific top three. It literally changes every month, it’s a mix of everything. I listen to throwbacks as well, like from 2010. It’s not a concrete top three.

Definitely the injuries. I’ve been through an ACL injury in the past year so I’ve experienced how hard it is to go through a long term injury. I’ve come to realise it’s a part of football, getting injured and such, but at such a young age to do it, it wasn’t just physically challenging but mentally challenging as well.

It was hard not to be playing every week and training every week. I did find it very difficult but it has made me stronger and has even made me appreciate the game even more. I’m definitely a better player now.

Definitely representing my country. I was part of the under 17 Matildas and the under 20 Matildas so I was going overseas and playing against other countries and meeting new people. But nothing really beats putting on the Australian jersey and representing your country because it’s just a real honour.

Football has impacted my life in many ways. I was exposed to a professional environment from a very young age. I was training at Melbourne City from  the age of 13 and because of this I had to mature very quickly to meet the expectations.

Due to also playing with the young Matilda’s and in overseas tournaments I’ve met many like-minded athletes and life long friends. Therefore not only has it enabled me to grow as an athlete but also as a person.

Going through such a big injury at such a young age, resilience has been a big one in the past year. I’ve learnt that I’m much stronger than I thought I was. Going through all that has been the main thing.

The long term goal would definitely be the 2023 World Cup, but short term would be trying to make the Young Matildas squad and next season get playing with Melbourne City again.

I’m also studying at uni at the moment, doing a physiotherapy course so between all of those I think I’ll be very busy but I’m excited. I really like setting goals because I think it helps me strive for something in the years to come.

I think a lot of soccer players, we have this stereotype that we’re very harsh athletes. I feel when people get to know me, I’m a bit more open and I’m relaxed. I’m definitely more chilled than everyone thinks.

I think the important thing after the game is getting the right food into you, so fueling for the next game and recovering, but also just watching movies and going to the beach. I love going to the beach in summer, it’s great recovery and a great time to unwind and reset.

I think because I’ve had an injury for the past year, I haven’t really played much so I’m really looking forward to getting back on the pitch. I’ve just started contact training with Melbourne City so I haven’t actually played a game this year so I think I’m just really excited to get back out on the pitch and get my confidence up and hopefully by the end of the year be playing games with Melbourne City and just enjoying my football again.