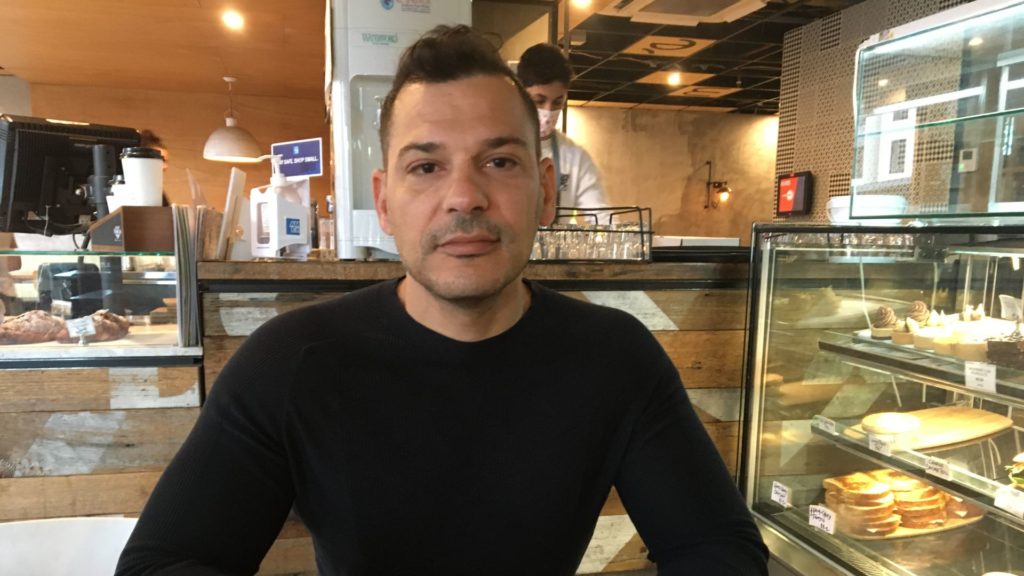 Nikolas Korfias didn’t know what multiple myeloma was until the doctor diagnosed him with it. Photo: NK

Nikolas Korfias, originally from Kalymnos, had come with his family to the Northern Territory when he was aged 8. By that stage, he had already learnt about Greek mythology, taught in the early years of the Greek education system. He was aware of Perseus, the legendary founder of Mycenae, who had beheaded the monstrous Medusa, the mythical Gorgon known for turning men to stone. Little did he know at the time that three decades later he would battle his own monster, multiple myeloma while being part of the Perseus Trial, and eventually come out a winner – so far.

His battle with multiple myeloma began when he came home fresh from a holiday to Greece to see his grandmother in August 2019 where the young entrepreneur, in charge of a transport company, saw a doctor for an ear infection which he couldn’t shrug off. “I didn’t think too much of it, but doctors said my body was fighting something, though levels seemed fine,” Mr Korfias told Neos Kosmos.

Tests continued, and it was on a Tuesday after a long weekend in Sydney when he was told that his MRI scan and other tests confirmed he had multiple myeloma.

“I’d never heard of it before. I didn’t know what it was,” Mr Korfias said, remembering going home to do a Google search and being in “total shock” after what he read of the disease which is common for people aged over 60 and rarely appears in those under 40. He was especially sickened by prognostics when it came to the average life expectancy following diagnosis – and the fact that there is no cure.

Well versed on multiple myeloma these days, Mr Korfias explains how this type of cancer forms in a type of white blood cell called a plasma cell where cancerous plasma cells accumulate in the bone marrow and crowd out healthy blood cells. In laymen’s terms, bones are weakened, leaving a hole in the centre of the bone.

“I didn’t know how to take it,” he said, adding that denial followed ‘shock’.

“I was fit, I felt healthy, and nobody in my family had ever had multiple myeloma, or cancer.”

READ MORE: Greek Australian mother loses cancer battle, but still finds a way to give back to Hellenism

After the initial shock, Mr Korfias was told that, being in the early stages of the disease, he qualified for the Perseus trial where newly-diagnosed patients in Australia, Greece and other countries underwent stem cell replacement therapy. For one year, from September 2019, he focused on regaining his health, but in the process he lost his business and his hair – “though I’m not sure how my business would have fared with COVID-19 anyway,” he said.

“You need to focus your energy on recovery. It takes a lot of mental focus,” Mr Korfias said, pointing to the medication and steroids he was on and regular visits to St Vincent’s hospital which left him tired and swollen. “You are getting injected daily. It is good to keep your mind busy, but I decided I needed to spend time on myself. To fight and get through it. I focused on training and having a positive mindset.”

During his hospital visits, he met other patients, mainly elderly men. “I didn’t see anybody young with multiple myeloma, though obviously younger people had other forms of cancer,” he said, adding that not seeing others his age with the disease makes it harder for a young person to relate to the disease.

He took very well to the treatment and recovered very quickly. “Initially, 20 per cent of plasma cells were affected, but the figure is at one per cent at the moment. My goal is to bring it down to zero,” he said.

His body is etched with tattoos of Spartan warriors, and it was their spirit he wanted to channel when undergoing the Perseus Trial during the COVID-19 pandemic – a time of isolation made even harder. Knowing that a positive mindset was critical to his recovery, he focused on the positives.

“My life was always ‘go go go’ and ‘work work work’ so I began to reevaluate things,” he said. “You’ve just got to have less stress, enjoy life and live well.”

During the battle, he thought long and hard about what he would like to do once the ordeal was over, and how he would be able to take all he had learnt and implement life changes. It was at about this time that his brother, George, had a health scare with an infected intestine, and they began talking about the system, and what kind of support is necessary. The two brothers got together and laid the groundwork for Partner N Care, an NDIS provider which they created.

“When in hospital, my university studies and interest in business kicked in and I looked at my own experience and knew that I wanted to provide a different service to help people,” Mr Korfias said. “We not only help people who have multiple myeloma, but also those who have other forms of disabilities, such as Autism and Down Syndrome.”

Since their first client, Mary, the service has grown. “Our goal is to provide a relateable service, NDIS from people who have actually experienced disability from within the system,” he said.

“This is something I feel very passionately about.”

As for the rest, life is good and Mr Korfias is ready to proceed to the next chapter – hopefully marriage with his fiance who has stuck with him throughout the ordeal.