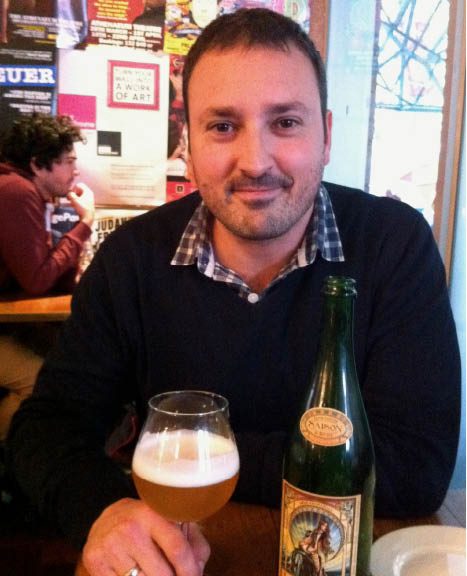 Adelaide-born Costa Nikias knows his stuff when it comes to beer and brewing.

We’re sitting in Melbourne’s Beer Deluxe cafe in Federation Square, one of the city’s most popular emporiums for sampling hand-crafted beers, and as they stock Nikias’ recently launched La Sirene brand, it just has to be tasted.

“It’s a yeast-driven beer,” says the 34 year-old Nikias enthusiastically, slowly pouring out the pale straw-coloured cloudy concoction, “so you should get some orange blossom aromatically, some honeysuckle, and a rounded finish on the palate.”

And for sure, it’s a delicate, refreshing, yeasty brew. I’m sold with the first mouthful. Created from a 400 year-old recipe Nikias found in a village in the Wallonia region of France, La Sirene was released last December and has found growing popularity with discerning Melburnian beer drinkers.

Brewed at the Jamieson Brewery near Lake Eildon, it is the first incarnation of Nikias’ own microbrewery that he manages in tandem with his own brewing consultancy business.
Having worked in microbrewing for ten years, La Sirene was created specifically says Nikias to plug a hole in the Australian market for French-Belgian rustic style beers made with authentic ingredients.
Having spied another gap in the market for microbrewing generally in the asia pacific region, it’s through his consultancy work that he has begun riding a wave of interest in setting up commercial microbreweries.

“With 168 microbreweries in Australia and more coming online weekly, there’s exponential growth,” says Nikias, who has created a perfect position to ride a wave and redefine brewing business models.
“There are two different types of people who do this – there are the home brewer, who want to realise a dream, and then there are the business heads, who want to keep their full-time job in banking or whatever, and create a microbrewery as a sideline. I help both.”

Born in Adelaide, Nikias began by helping set up vineyards in the Maclaren Vale region, and it was whilst studying winemaking that he and uni buddy James Brown decided to realise a dream of starting a brewery.
“Mum’s from Nemea, a famous wine making region in the Peloponnese,” says Nikias, “so maybe it’s in the blood.

“With La Sirene, we’re selling around 3000 bottles a month to 25 key accounts at the moment in inner city Melbourne, but it’s all we need. We bottle it ourselves, distribute ourselves. It’s a very artisan approach. We’re after organic growth, it’s about producing a beer by hand in a true craft manner.

“The trick is to make it a sought-after product. We just look at bottle stores and bars, we’re not interested in hitting the mass market and that’s a very conscious decision on our part. This is a refined niche product, and most of the promotion of the brand happens through social media.”
Nikias admits that despite La Sirene’s success, the brewing side of his work is still very much a labour of love, and that his serious profits are made through his consultancy work.

“Customers need a complete turn-key solution; how to start a business, how to brew, the technology needed,” says Nikias, who is recently back from China to scope brewing equipment for one of his many clients, and his advice on constructing successful microbrewing businesses is in high demand.

“The consultancy work takes me overseas a lot – New Zealand, Indonesia, the Phillipines, the US. I’ll be doing a presentation in Singapore next week. I teach how to brew, recipe development, finding the right site and equipment, and also the business planning aspect – how to assess a project’s financial feasibility.

“To develop your own microbrewery, you need to be looking at capital investment of close to $500,000 minimum,” says Nikias.
“Once you begin to produce, you need to be making 2000 litres or more per batch, and then selling that amount. After that you’ll start to see profit trickling in, and that can go to paying back on the equipment and reinvestment.”

Key to being a commercially successful microbrewer is to be well-funded at the development stage says Nikias.

“It’s more than making a profit, you need to have a real passion for beer if you want to make a go of this, and above all, you have to make sure you have a point of difference.”