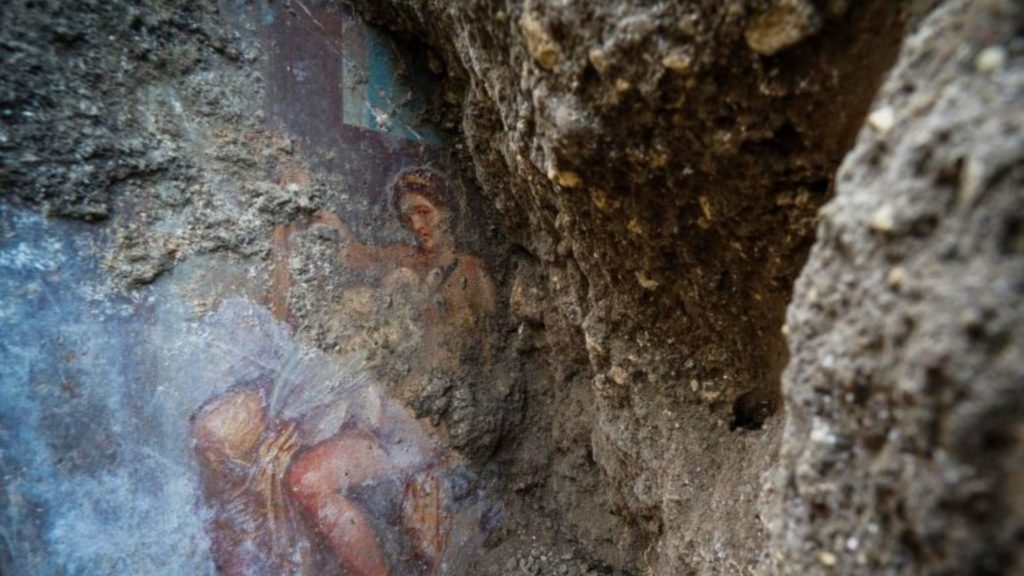 The fresco ''Leda e il cigno'' (Leda and the swan) discovered last Friday in the Regio V archeological area in Pompeii, near Naples, Italy, is seen Monday, Nov. 19, 2018. The fresco depicts a story and art subject of Greek mythology, with Queen of Sparta Leda being impregnated by Zeus - Jupiter in Roman mythology - in the form of a swan. Photo: AAP via AP via ANSA/Cesare Abbate

Archaeologists have found a fresco depicting Jupiter in the form of a swan and Leda, the legendary Spartan queen being impregnated by the god; a fairly common decoration theme in Pompeii and Herculaneum, another city destroyed in A.D. 79 by the volcanic eruption of Mount Vesuvius AP reports.

What is different about this fresco is Leda’s gaze, according to Pompeii archaeological park director Massimo Osanna.

“Leda watches the spectator with a sensuality that’s absolutely pronounced,” Osanna told Italian news agency ANSA explaining that the fresco was painted to make it appear Leda was looking at whoever saw the fresco upon entering the bedroom.

“It is inspired by the Greek myth of love, with an explicit sensuality in a bedroom where, obviously beside sleep, there could be other activities”.

In Greek mythology tradition Leda was said to have borne children fathered by the god Zeus, (or Jupiter), and by a mortal king of Sparta; she was the mother of Helen of Troy and the twins Castor and Pollux.

The vivid fresco in which Leda also covers the bird with her cloak was discovered Friday during ongoing work to consolidate the ancient city’s structures at the park which is part of the Italian Culture Ministry.

The bedroom is located near a corridor by the entrance of an upscale domus (home) which based on Osanna’s estimation belonged to a rich merchant who wanted to give the impression he was culturally advanced by incorporating myth-inspired frescoes.

“It appears the artist was inspired by a 4th century B.C. sculpture by Timotheos,” he said.

“Because of safety concerns, unexcavated parts of the domus will probably remain that way. Archaeologists are considering removing both frescos found in the home to a place where they can be protected and shown to the public.”