Vasso Apostolopoulos believes ‘there are cures for every disease, sitting in fridges’ 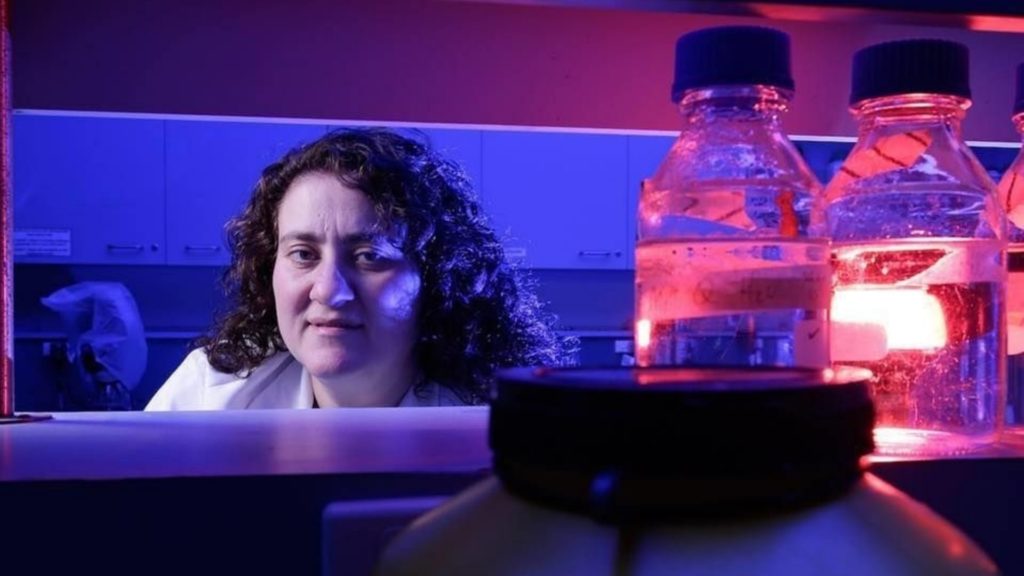 “There are cures for every disease, sitting in fridges.”

It is a statement that can be easily dismissed as a ‘text book’ sentence taken out of the Big Pharma conspiracy theory. Hold your horses though rational, intelligent people! This time, the statement is not doing the rounds as a social media meme, but a notion propagated by Professor of Immunology and Vice President of Victoria University’s Research Department Vasso Apostolopoulos, a medical science insider and one of the most distinguished scientists of Australia, whose brilliant work and mind has been acknowledged by her colleagues internationally.

If all goes according to plan, in about two years Professor Apostolopoulos will change the world by offering every woman – and man – who has been scarred by breast cancer, a vaccine.

She will then officially enter the pantheon of scientists as one whose brilliant mind, hard work and dedication to knowledge has improved the living conditions of dozens – if not hundreds – of millions of people. Seeing her on the Nobel nominees list might not come as a surprise to many.

“Following clinical trials and the study of long-term clinical trial data, we are pleased to know that breast cancer vaccine can prevent cancer from returning. Also, this active substance we developed has been given to a company that will develop it into a vaccine that will be given to young women so that they never develop breast cancer. Therefore, the vaccine is now in the production phase and, like the cervical cancer vaccine, will be given to girls from the age of 13 years. Of course, it is up to the company to see when it comes to the market. I will say very cautiously that I will put it within the next two years” she said recently speaking to Neos Kosmos.
She does not hide her enthusiasm when I ask her how she feels in the face of this development.

About eight months ago she was in Greece to participate in 19th Medicinal Chemistry Conference held in Amaliada, the birthplace of her parents. She was the honoured scientist of the event. As a consequence, she was admitted and guided to the presidential palace by President of the Hellenic Republic Prokopis Pavlopoulos. She refers to this experience with somewhat subdued enthusiasm.

“It was all right,” she says, but her voice’s tone becomes ostensibly more passionate when I ask her about her experience in general from her trip in Greece. She focuses with succinct detail on the short conversation she had with a lady who had gone to listen to one of the speeches she gave.

“This lady came up to me and asked me about my mum and if she went to a certain High School. I said ‘yes that’s mum and yes she did go to that High School’. ‘We were the best friends in high school with your mum,’ she said and then she started exclaiming, ‘Oh my God, you are Hariklia’s daughter!’, hugging me as well and the saying to me, ‘I am so proud of you. You know 20 years ago I was diagnosed with breast cancer. I had young children, I was devastated. I was so sure that I was not going to see my children grow up. My only hope was your vaccine. So I went took part in one of the trials and I am here today because of you,’ she said. I got goosebumps, this woman was not the faceless statistics I see and observe on my daily routine. This was a real person. And she thanked me. That was one of the best moments in my life. You know! I know the results of the trials but you never speak to people. That was so real”.

She goes on to speak with the same warmth about the Greek community. For all of those, known and unknown who about 20 years ago, when Dr Apostolopoulos was at the first stage of her breast cancer vaccine research working at the Austin Hospital Research Institute were mobilised to help her take her research many steps further.

“Between 1995 to 2000 the Greek community of Australia but mainly in Melbourne, were doing a lot of fundraising, giving money for this particular project. We used that money to do all the early clinical testing, done in humans. I really appreciate that the Greek community really supported me and gave a lot of money for the research in order for the vaccine to be in this stage today. I want to thank them for the trust they showed me. If it wasn’t for them that part of my research would have never been possible. You see there are cures for every disease but the problem is the funding or more accurately the absence of it. As researchers, we find the cures and we do the testing but to take that further into humans and to commercialise and have it as product, you need millions and millions of dollars. If there is no funding, nothing continues there are lots of vaccines for everything but they are sitting in fridges. I’ve got 17 patents and 90 sub-patents and there are only three that had been developed, the others are just seating in the fridge. Trillions of dollars are spent on weapons, not on developing these life saving formulas. That’s why I believe that the Greek community’s help at the time was crucial”.

Her dedication to science, in conjunction with her fierce determination to leave this world a better place than the one she found when she started as a young scientist, is the driving force behind her research choices. In addition to her duties as Vice-President of Victoria University’s Research Department as a professor who supervises PhD students, a leading researcher who has under her wing a significant number of other colleagues, “Our Vasso” – as many in our community call her – in recent years, and in collaboration with scientists from the Department of Chemistry from University of Patras is working on the development of a Multiple Sclerosis vaccine.
“In the coming months we start clinical trials on humans of an active substance that we hope will eventually develop into a Multiple Sclerosis vaccine. Pre-clinical animal tests have been successfully completed and the active substance is currently undergoing the process of copyright protection. Clinical trials in humans will be done here in Australia. Multiple Sclerosis is an autoimmune disease. What we want to believe is what we have achieved to find a way or better a medicine that trains the immune system of those suffering, to stop its attacks on the organs or the nervous system”.

The scientific frontiers for Professor Apostolopoulos do not stop here, though. Not long ago, along with her associates and the rest of the Institute of Hygiene and Sport researchers announced another ‘discovery’; the benefits of Vegemite on our mental health.

“I am also working on drug addiction, specifically methamphetamine addiction. It is a big issue for our society. Our research is taking two approaches. On the one hand we are trying to block the receptors, and on the other to use the immune system to block the effects of methamphetamine on the body. I am very optimistic. It is going quite well. A lot of users get depression, become violent and suicidal. We also know that even for those people who stop taking the drugs, mental health issues remain. They also have chronic gut issues for the rest of their life because the drug damages their gut. Emerging research points out that the gut talks to the brain, and the way in which this happens. So if your gut is not healthy and damaged then everything that links to the health of your gut goes to the brain as they interact with each other. We try to understand the damage drugs do to the body, to try fix those problems so they won’t have long term effects”.

She identifies depression, as another big area linked to her ‘methamphetamine vaccine’ research. “We are finding again (that) gut issues are causing depression, anxiety, so healthy gut, healthy mind.”

We started our conversation with the hope for a better life for hundreds of millions of women, and we end it on the same note. With optimism and hope for millions of other people. For those who suffer from Multiple Sclerosis, for those who sink into the dark web of drugs and depression, for those suffering from Type A diabetes. With the same optimism we hope to hear more good news from her in the near future and also hope that it won’t be too long, before our “Vasso”, becomes the first Greek Australian Nobel Laureate. She deserves it after all!