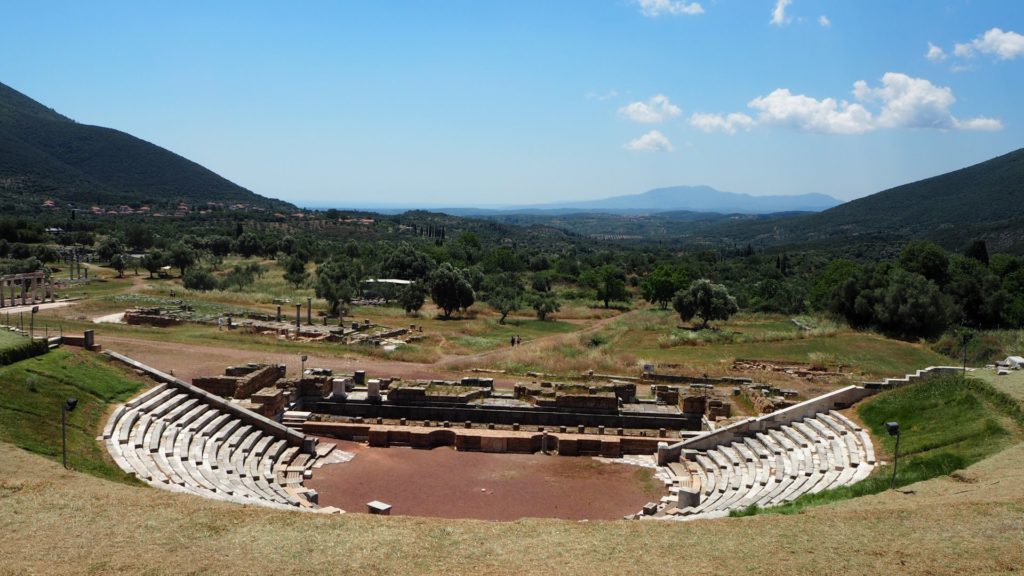 What a privilege it was for all who were able to attend any of the recent functions and presentations held during the recent visit of Professor Petros Themelis to Melbourne.

Professor Themelis is one of Greece’s most distinguished archaeologists. A member of the Conservation of the Acropolis Monuments Committee and having held various academic positions, including at the University of Crete, for over 30 years he has been directing excavations and restorations at the site of Messene, the classical capital of Messinia in the Peloponnese, known today as Ancient Messene.

This site is breathtaking to behold. It was only a couple of years ago that I was persuaded to visit Ancient Messene by my good friend George Iliopoulos. “You must go,” he said, “it is one of the wonders of Ancient Greece”.

The site is a short drive north-west of Kalamata, barely 30 kilometres. But as you approach its entrance you are immediately impressed by its towering walls stretching up the side of Mount Ithome and its massive gates. These walls were famed throughout the Ancient world; the 2nd century AD Greek travel writer Pausanias compared them favourably to those of Byzantion (the name of the original Greek settlement at the future Constantinople) and Rhodes. The classicist Andrew Burn called them “the great walls of liberated Messene”, the finest example of Greek fortification and a monument to the liberator of Messinia from Spartan rule, the Theban general Epameinondas. Think of Mycenae’s Lion Gate and you will get some impression of the immensity of the structure.

Entering the main site by foot you are immediately impressed by the size of the excavations. The whole complex stretches before you, from the sheltering hills across the valley before you and off towards the distant mountains beyond. On a sunny summer’s day it is a beauty to behold.

The whole site is a complex of structures encompassing an agora, temples, amphitheatres, stadiums and market places. Founded in the 4th century BC as the capital of Messinia, the city flourished into the Roman era. Walk the city accompanied by Pausanias’ guide and you will be able to envisage the living city as it once was.

READ MORE: Navarino Challenge: A host of activities in Messinia

Pausanias writes of the fountains, many temples and statues that were features of the city, many of the statues created by the famous Messenian sculptor Damophon. You can see the column dedicated to the sculptor, upon which once stood a bronze sculpture of the artist. Pausanias writes that most of these statues stood in the Sanctuary of Asklepios, with excavations confirming that some 140 were once on display here. People would come here for healing. The amphitheatre of the city was one of the largest in antiquity, erected in the Hellenistic period and expanded during the Roman era. Only a portion of the structure had been excavated, with more to be exposed and restored.

One of the most striking features is its great stadium, stretching maybe half a kilometre from the seating at its rounded head to the mausoleum erected at the end of the stadium. As Professor Themelis said during his presentation at Melbourne’s Hellenic Museum, the number of columns that surround the stadium for much of its length rivals the great colonnaded space that until recently stood at Palmyra in Syria.

The most amazing thing about the whole complex of structures is to realise that barely 40 years ago hardly any of these existed beyond a few exposed stones and rocks. It is thanks to the work of Professor Themelis and his team that we have this wonder to enjoy and appreciate.

Part of the mosaic floor depicting a scene from one of the lost plays of Menander, showing a donkey weighed down by a dowry. Column dedicated to the famed sculptor of Messene and creator of many of the city’s scupltures, Damophon. The small theatre at the Ekkllesiasterion, which was used for cultic performances and political gatherings. 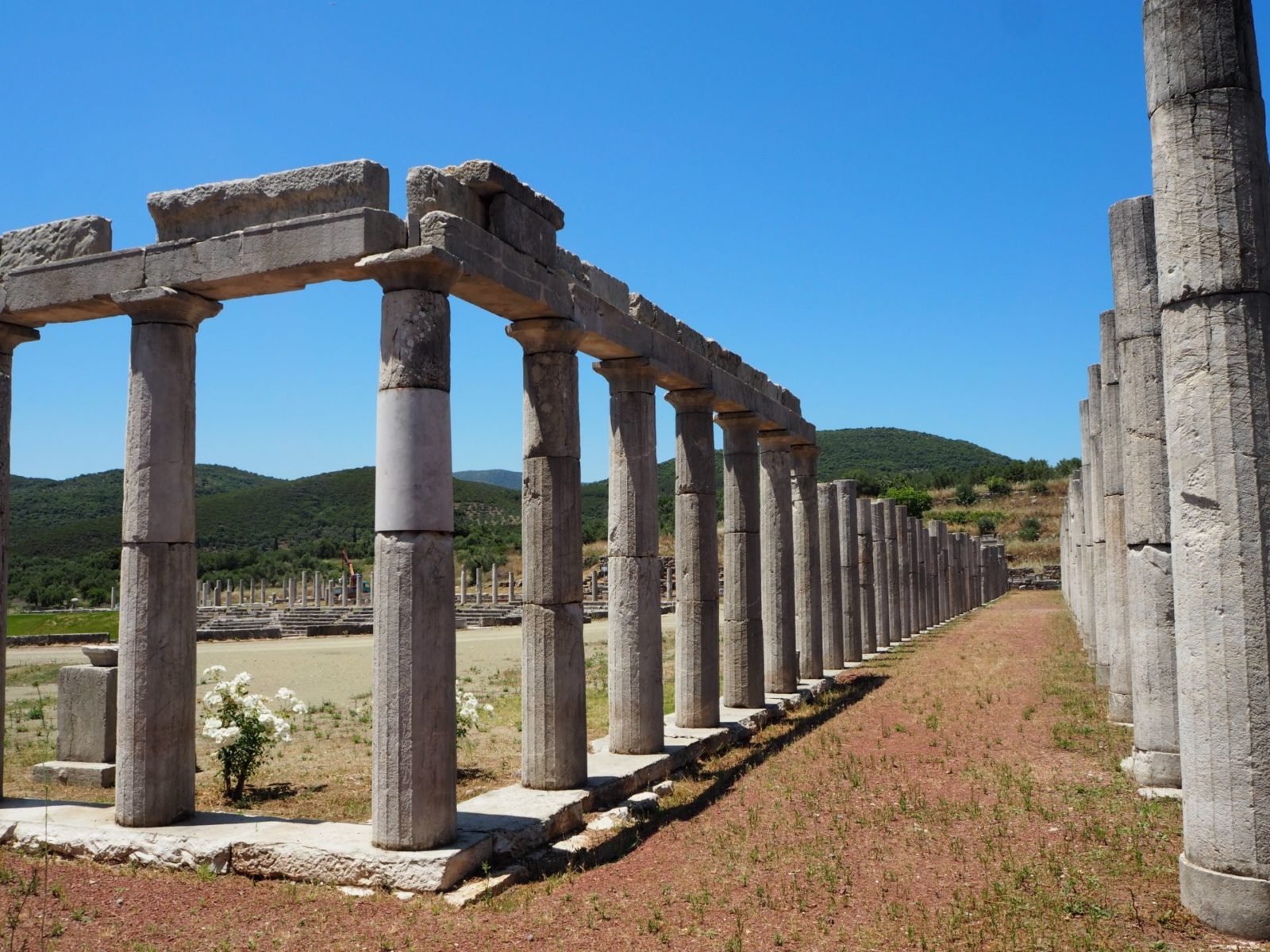 The great colonnade of Messene. The Mausoleum of the Saithidae Family. 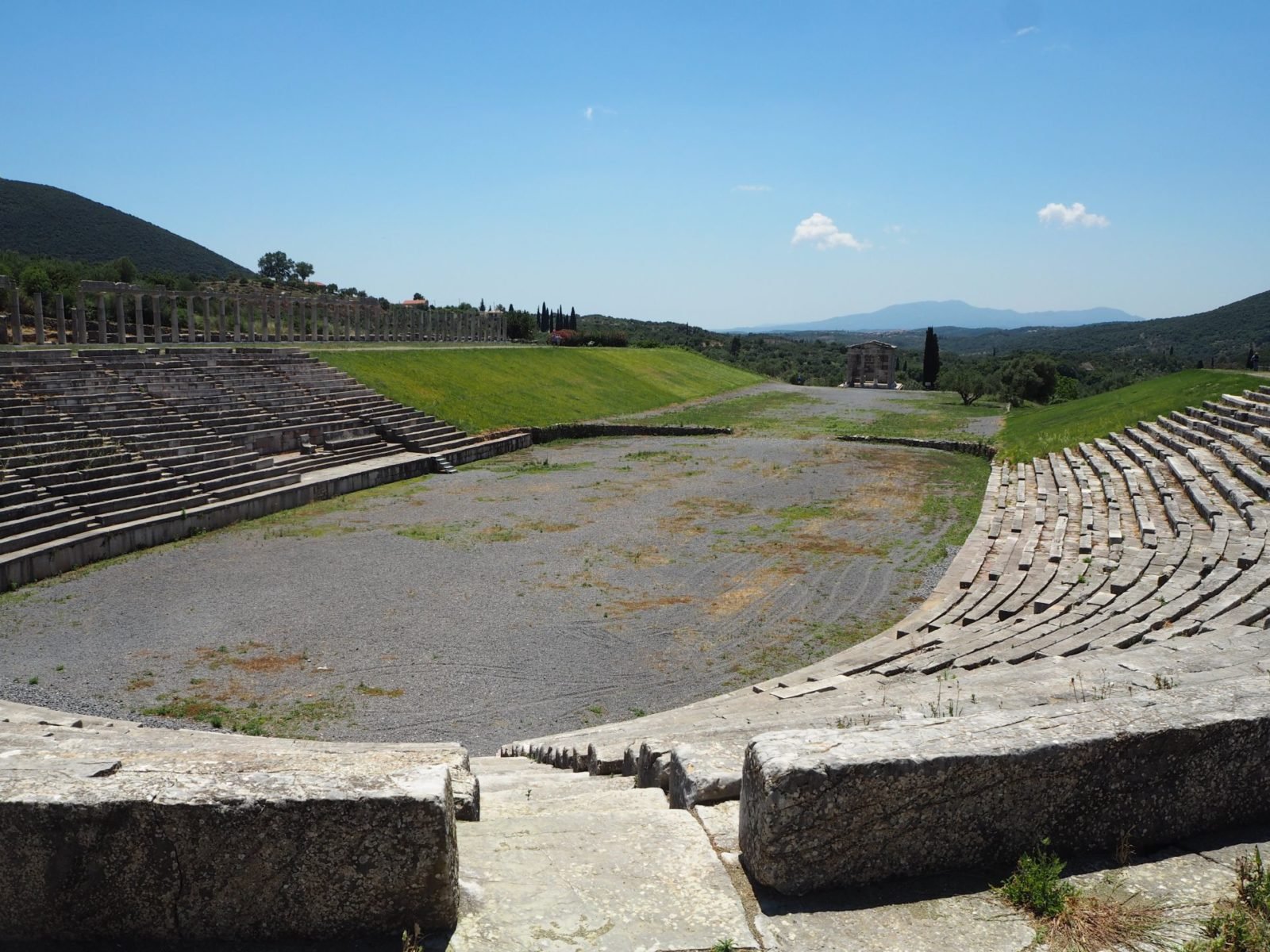 The great stadium looking towards the Mausoleum, with the colonnade on the left.

During his informative presentation at the Hellenic Museum, Petros revealed the extent of his work. From his early photographs of the site, with only parts of broken columns and a few footings exposed, he revealed how he had slowly started the painstaking work of excavation and finally the work of restoring these amazing structures.

For me – and no doubt for many visitors to the site – the most impressive structure is the Mausoleum of the Saithidae Family that stands at the end of the stadium. Erected by one of Ancient Messene’s prominent families and benefactors, the mausoleum was a funerary monument. Formerly a collection of broken stones, one can only be impressed with the results of Petros and his team’s careful restoration over many years.

It was no surprise that during one of his presentations in Melbourne one of the audience members asked why Ancient Messene was destroyed or abandoned. The Professor explained that with the ending of the Western Roman Empire, local societies and economies were disrupted. Local communities across the then Roman world were forced to look to their own resources to survive. Before the re-establishment of authority from the surviving Roman Empire in the East, commonly referred to as the Byzantine Empire, local people dismantled the beautiful buildings whose luxuries they no longer found useful. They removed the lead and iron ingots that held the stones together – for sale or re-use – and they re-used some of the stones for new buildings that they needed. This is a common story throughout the Ancient world, one only has to think of Rome’s great Coliseum, of which the surrounding marble facings were removed by the locals to get at the same valuable ingots that held them in place.

During his visit to Melbourne the Pammessinian Brotherhood Papaflessas and Lemnos Gallipoli Commemorative Committee organised for Professor Themelis to visit some of Melbourne’s commemorative and classically-inspired buildings and structures – from our Lemnos Gallipoli Memorial in Albert Park where the sculptor Peter Corlett included many classical references such as the face of the huntress Artemis, to the Shrine of Remembrance whose architects had been inspired by the ancient Mausoleum of Halicarnassus and our own Parliament building, with its many references to Greek and Roman architecture, as well as the new Hellenic Anzac Memorial plaque erected in its gardens. The words I selected for this plaque drawn from Thucydides’ Funeral Ode of Perikles are particularly relevant to Professor Themelis’ work, for he has not only created a monument to the past but also one in the hearts of all who treasure the classical origins of western civilisation.

Volunteers and Financial Assistance Needed
One of the aims of Petros’ visit to Melbourne is to attract support for his continuing excavations at Ancient Messene. The current economic climate in Greece also affects important archaeological work and so financial and other forms of support are needed to continue the works.

Apart from financial donations, Petros also welcomes physical assistance in the form of volunteers to assist with the excavations and restorations themselves. Many university and school students from throughout Europe and as far away as Japan assist in this way. It would be great if some of Melbourne’s universities and schools could include such a program as part of their regular overseas study projects. Given Melbourne’s large Hellenic population, it is a shame that our own local community does not yet have a regular program of assistance in place. Hopefully this will be rectified in the future.

So next time you go to Greece, enjoying its wonderful summers, maybe take the time to stay on the mainland a bit longer, and make your way down to Ancient Messene and wonder at the work of these great craftsmen and the loving work of Professor Themelis and his team in restoring some of its ancient grandeur. And be sure you take a copy of Pausania’s second volume of his Guide to Greece, dealing with Messinia and Southern Greece, published by Penguin.

Professor Themelis was accompanied on his short visit to Australia by Panagiotis Bazigos, Secretary-General of Messiniaki Amfiktyonia, the cultural association connecting Messinia with its diaspora across the world. They both arrived in Melbourne from Adelaide where they had met with representatives of the Messinian community, who had also assisted in their visit to Australia. Thanks to Betty Kosmas, Paul Sougleris, Steve Gotsis, Steve Tsaganis and all at Melbourne’s Pammessinian Brotherhood Papaflessas for assisting in bringing Professor Themelis to Melbourne.

For readers wishing to support the excavations at Ancient Messene, contact Professor Themelis via email pthemeles@gmail.com or through the website www.ancientmessene.gr

* Jim Claven is a freelance writer, author, historian and Secretary of Melbourne’s Lemnos Gallipoli Commemorative Committee. His latest publication ‘Lemnos & Gallipoli Revealed – a pictorial history of the role of Lemnos in Australia’s Anzac story’ will be published in coming weeks. He can be contacted at jimclaven@yahoo.com.au.