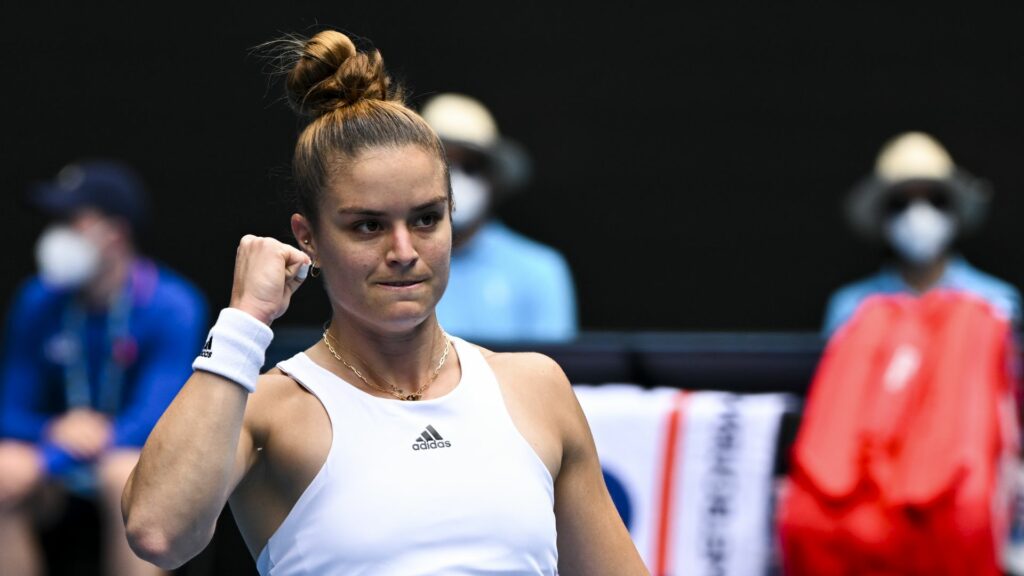 Maria Sakkari of Greece celebrates after winning her first Round Women's singles match match against Tatjana Maria of Germany on Day 1 of the Australian Open, at Melbourne Park, in Melbourne, Monday, 17 January, 2022. Photo: AAP/Dave Hunt

The No.5 seed was the first Top 10 player to move into the second round of the 2022 Australian Open, as she defeated the German 6-4, 7-6(2) in the first match of the event on Rod Laver Arena.

Seeding in the Top 10 at a Grand Slam for the first time in her career, Sakkari took an hour and 46 minutes to fend off former Top 50 player Maria, who played the Australian Open on a protected ranking of No.100.

Maria had beaten Sakkari in their only previous encounter, at an ITF Challenger event in Mexico back in 2014. Sakkari just got her revenge even though Maria matched her in aces with four.

Sakkari, however, dominated the match with 13 more winners than the German to help her clinch two close sets.

Sakkari jumped at the opportunity to settle the score at a double fault by Maria on break point at 4-4 in the first set.

In the second set, Maria had three break points with Sakkari not letting any through until the tiebreak.

True to her words earlier last week: “I want to be ready for the next match and yes, I am here to win this tournament but my main goal is to be prepared for the Australian Open”, Sakkari won easily.

Watch her fly through to the second round below.

Let's get the party started 👏👏@mariasakkari is through to the second round, getting it done in straight-sets over Tatjana Maria 6-4 7-6(2). #AusOpen • #AO2022@wwos · @espn · @Eurosport · @wowowtennis pic.twitter.com/iLmbzNxCf0