Schliemann’s Hellenes, Homer’s Troy and the Greek miner from Australia

The remains of the amphitheatre at Hissarlik (Troy). Photo: Jim Claven

This year is the centenary of the Asia Minor catastrophe in which we will remember the tragedy that befell the Hellenic community of the region and celebrate the survival of the community throughout the Hellenic diaspora, including to the shores of Australia.

In this we will also remember the vibrancy of Hellenic culture throughout Asia Minor, stretching back to ancient times and into the era of the famous myths and legends of Ancient Greece. It’s culture is reflected in remains of the great Hellenic cities that once dominated the region.

But perhaps the mightiest reference to the Hellenic presence in Asia Minor are in the writings ascribed to Homer, The Iliad and The Odyssey. It is in The Iliad that we read of the culmination of the great war between the Achaeans (whom Homer applied to Mycenaean-era Greeks) and the city of Troy. In Homer’s account, the Achaeans led by King Agamemnon eventually defeated the Trojans and captured their city after ten years of war. The nearby Hellenic Islands of Lemnos, Imbros, Tenedos and Samothrace all have references in Homer’s story.

Just as the question of whether Homer was a single actual person, so the historical basis for The Iliad has been the basis of archeological and historical argument ever since it was written down. What is not disputed is the antiquity of the Hellenic presence in the region. 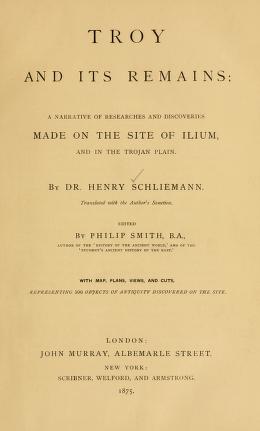 Schliemann’s book on his excavations at Troy in the 1870s. Public domain. 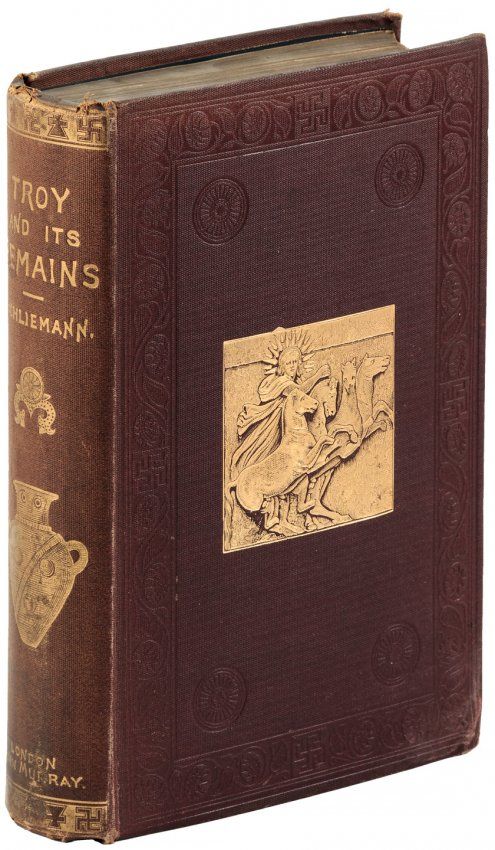 Schliemann’s book on his excavations at Troy in the 1870s. Public domain.

By the time the German businessman and amateur archaeologist Heinrich Schliemann made his way to the region– known as the Troad – he was following in the footsteps of many others seeking physical evidence of Homer’s story. The difference was that he brought both an almost inexhaustible energy and private funding to his excavations at Hissarlik, considered by modern historians to be the most likely location of ancient Troy.

It is not my intention to cover the full details and controversies of Schliemann’s excavations, which began in 1870-73 and continued in 1878-79 and finally in 1882-83. While he did find evidence of a classical Greek township or fortress, with deeper remains stretching further back in time, his methods have left modern archaeologists aghast. In his eagerness to find the locations, buildings and graves of Homer’s Iliad Schliemann dug massive trenches into the hill, smashing through layers of history and miss-identifying where his finds had been found.

In this he is now known to have smashed through the remains of the Trojan War-era city, now dated to the Late Bronze Age or 1,300 BC. Modern archaeology has confirmed the antiquity of the remains, their stratification from its foundations around 3,000BC through successive periods of Classical, Hellenistic, Roman and Byzantine occupation.

As he looked out over the plain from the heights of the hill, Schliemann could only concur with the view of others that this indeed was the location of Homer’s Troy. As he wrote, the view gave him “a view of the whole Plain of Troy … to the sea with the islands of Tenedos, Imbros and Samothrace.” Across the plain he imagined seeing the “sepulchral” mounds of Ajax, Partroclus and Achilles. The ruins he had uncovered were in his view the “sacred and sublime monument of Greek heroism.” Irrespective of the veracity of his literary allusions, his discovery of gold, jewelry and other precious items – which he assumed was from Trojan King Priam’s horde – were important archaeological finds.

What is less appreciated is the important role of the local Hellenic community in Schliemann’s work. Indeed without the labour and skills of these and other Hellenes drawn to Schliemann’s project his discoveries would either not have been made or would have been of a lesser magnitude.
As soon as he arrived in the region, Schliemann relied on Hellenic assistance. As the historian Michael Wood writes a Hellenic presence in the region had remained throughout the Ottoman period but this expanded with Greek independence and the arrival of new Greek immigrants.

By his own account, Schliemann would employ as many as 120 Greek workmen at any one time recruited from three of the nearby villages – Renkoi (modern Erenkoy), Yenishehr and Kalifatli (some distance from the modern village of the same name). One of these was Nikolaos Zaphyros Jannakis of Renkoi who was engaged as Schliemann’s personal attendant, cook and cashier. He wrote that he was “of great use to me on account of his local knowledge.” At the end of the excavations Schliemann would commend Nikolaos for his work, citing his incomparable honesty, his herculean strength and cleverness, thorough knowledge of the Turkish language and ability to successfully negotiate with local authorities.

He was also able to recruit two foremen – Theodorus Makrys from Mitylene (Lesbos) and Spiridon Demetrios from Athens. Both were highly recommended to Schliemann as the “best workmen” by their former employer, the Athens-Piraeus railway. Another of Schliemann’s Hellenic recruits was another foreman, one Captain Georgios Tsirogiannis from Evia.

The work engaged by the men was by all accounts arduous, their having to remove mountains of earth and rubble from the hill at Hissarlik. The only respite for the men was their observance of Sunday as a day of rest and religious service, as well as their local church festivals. As Schliemann writes “even the poorest Greek of this district would not work on a church festival even if he could earn 1,000 francs in an hour.” He writes that they will not work on these days for fear that “the saint will strike us” (Μᾶς δέρνει ὁ ἅγιος). During these days, Schliemann recruited local non-Christian workers. 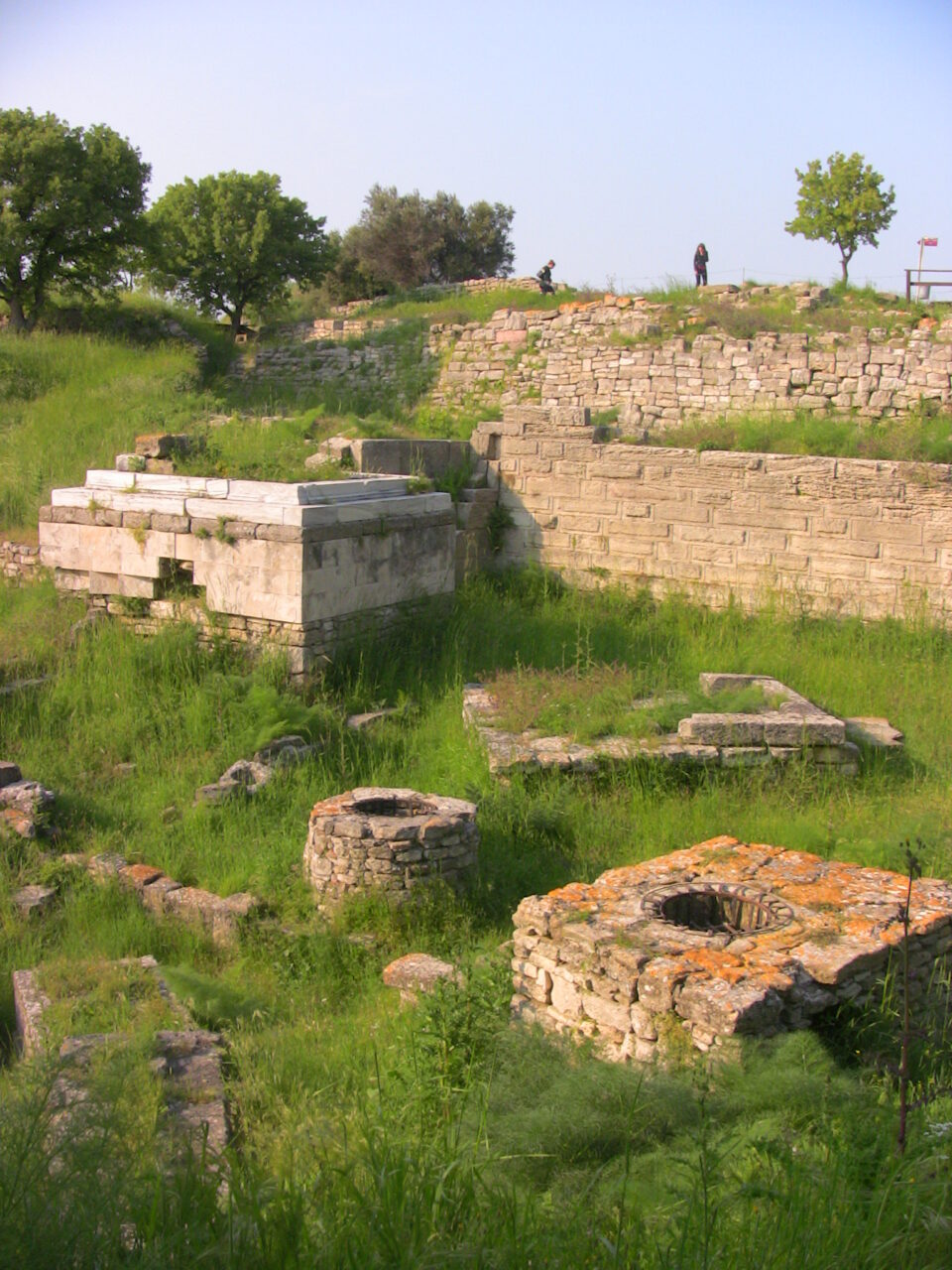 Views of the excavations at Hissarlik (Troy). Photo:Jim Claven By late April 1872 the difficulty of the work required Schliemann to engage another Hellene. The digging now required the creation of shafts and the removal of “colossal lumps of earth”. For this he engaged an experienced miner by the name of Georgios Photidos. Originally from Paxos, Schliemann writes that he had worked as a miner for seven years in Australia, where he was occupied principally in the making of tunnels. I imagine that Georgios had made his way to Australia – possibly Victoria – as part of the flood of immigrants seeking their fortune in the Gold Rush. And like so many others, returned his hopes dashed.
Schliemann makes no more mention of Georgios’ time in Australia, only writing that he had returned to Greece homesick, where he married. In need of work and hearing of Schliemann’s excavations, he had offered his services. Schliemann notes that not only was Georgios an expert miner, tunnel-man and pitman but he was literate and translated Schliemann’s progress reports for the Greek press and learned societies.

By all accounts Georgios became an essential part of Schliemann’s efforts, leading half of his workforce, comprising some 45 workmen. Schliemann writes that Georgios was “a very skillful engineer”, devising a system of side terraces to quickly remove the earth. He records that the Greek from Australia uncovered large finely-hewed beautiful blocks of limestone and was “constantly” finding Greek pottery, the great portion bearing the potter’s stamp representing a bee or fly with outspread wings above an altar.

Schliemann’s archaeological discoveries had confirmed the ancient nature of Hellenic civilization of the region. And they were found through the hard labour of his Hellenic labourers and the engineering and mining skills of Georgios Photidos of Paxos.

The laboring and stonemason skills of the local Hellenes would be useful in the days following the end of the First World War. As I have written in an earlier article in Neos Kosmos – In the wake of Agamemnon’s Army from 2018 – these workmen would help in the creation of the Allied war cemeteries erected across the Gallipoli Peninsula.

A few years ago I visited the site of Schliemann’s excavations at Hissarlik following the Anzac commemorations at the nearby Gallipoli Peninsula, leading an Anzac commemorative tour. The site is a regular stop off point in the various tours organized in connection with Gallipoli. After the comic recreation of the famed wooden horse, one can wander the ancient ruins of the citadel, with the remains of its great walls, stone gateways, temples, agoras and amphitheatres. As one looks out across the plains of the Troad below, one can indeed imagine this as the site of mythical Troy and the plain full of the soldiers of the Achaean army.

While these allusions may be a flight of fancy, the remains at Hissarlik do demonstrate evidence of the Hellenic presence in the region from classical times. And you should reflect on the fact that what we see today of the remains is in no small part due to the labour and skill of the Hellenes of the Troad and beyond who removed the centuries of rubble to reveal the Hellenic civilization that stretched back before them. The story of the modern discovery of Troy stands as testimony to the strength and persistence of Hellenic culture in Asia Minor into the modern era. And maybe it’s time for Australia to have a memorial erected to honour of Georgios.

*Jim Claven is a trained historian, freelance writer and published author. He studied Classics at Monash University and has researched the Hellenic link to Australia, principally through the connection of Australia’s Anzac story across both world wars. For more information on the Hellenes who helped Schliemann at Hissarlik readers are referred to Schliemann’s Troy and its Remains (1875), Michael Wood’s In Search of the Trojan War (1987) and Caroline Moorehead’s Priam’s Gold (1994). Jim can be contacted at jimclaven@yahoo.com.au.