Writing for Neos Kosmos, Professor Joel Christensen Senior Associate Dean for Faculty Affairs and Professor of Classical studies at Brandeis University and a Fellow at the Center for Hellenic Studies draws parallels between the modern world and Ancient Greece, by looking at how our ancestors saw plagues and how they reacted to poor leadership 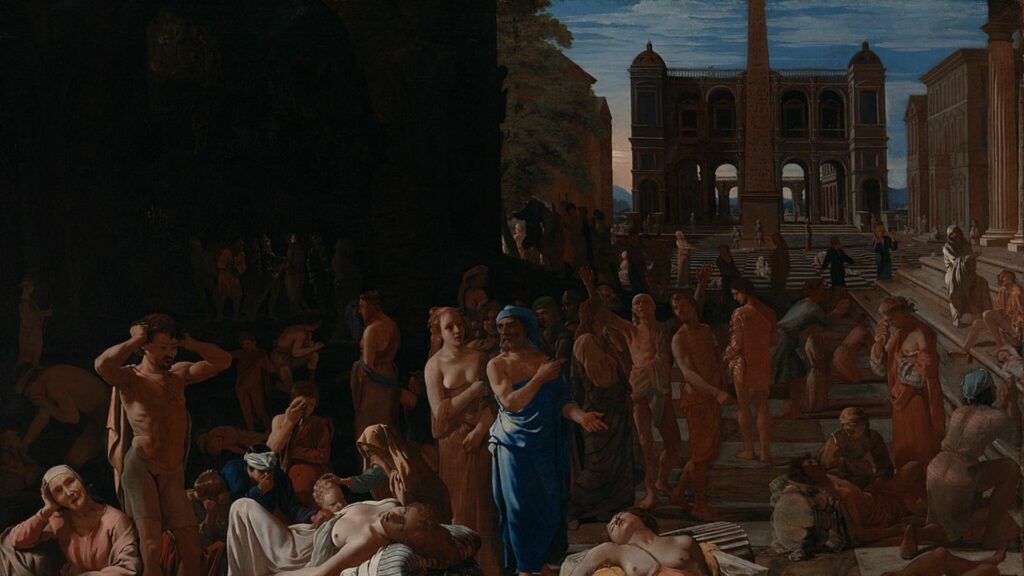 Plague in an Ancient City, Michiel Sweerts, c. 1652–1654. Gift of The Ahmanson Foundation (AC1997.10.1) European Painting Currently on public view: Ahmanson Building, floor 3 The painting is believed to be referring to the plague of Athens or have elements from it. Photo: Public Domain, released by the Los Angeles County Museum of Art www.lacma.org

In the United States February’s final week saw nearly 2000 deaths a day from COVID and yet local governments and the CDC have moved to aggressively roll back mitigating measures. Earlier, in January, John M. Barry, an expert on the 1918 Influenza pandemic, wrote that, despite good reason for optimism, we run the risk of letting our guard down too much.

As someone who specializes in the Ancient Greek world, I’ve spent a lot of time at home over the past two years thinking about historical parallels for our response to COVID-19. In the first month, I wrote in about how plagues functioned in ancient literature like Homer’s Iliad and Sophocles’ Oedipus Rex as a narrative frame to help us understand failed leadership and toxic politics.

In Homer’s Iliad, Apollo sends a plague on the coalition of Greeks laying siege to Troy because their leader Agamemnon refused to return an abducted daughter to Chryses, the god’s priest. In Sophocles’ Oedipus Rex, there is a plague on the land because the murderer of the last king (Laius, Oedipus’ father) was never brought to justice. In both cases, having access to an effective response to disaster is less a problem than having the political will to execute it.

Political opposition and expert testimony are part of the plots of the Iliad and Oedipus Tyrannus. In the Iliad the intervention of Achilles forces Agamemnon publicly to admit his error and return the girl and make amends to the god. Sophocles’ Oedipus rails against his brother-in-law, Creon, for bringing unclear news from the Oracle at Delphi and abuses the prophet Teiresias for telling the truth, just as Agamemnon lashes out at the prophet Calchas for revealing that his actions were the cause of his people’s suffering.

While these tales drawn from myth can help shape our expectations for good leadership and understand–if not condone–our modern reluctance to listen to expert public health advice, they don’t reflect individual responses to the plague and the emotional impact of a disease’s longer duration.

Thucydides’ tracks their plague as it allegedly moved from Egypt through the Persian Empire and into Greece just as our media covered COVID-19’s spread across the world.

I have also kept returning to the historian Thucydides, the historian of the Peloponnesian War, a generation long struggle between Athens and Sparta. Thucydides presents one of the most famous accounts of a plague from antiquity. And he seems to be clear about the cause. At the beginning of the war with Sparta (431 BCE), Athens pulled all of its people and important livestock within its walls. Its superior naval power made this a winning military strategy; yet the close confines of the crowded city yielded unintended consequences.

Thucydides’ account is remarkable in part for his style at the time: he criticises earlier historians as “story-tellers” (muthologoi) while he writes about events he has witnessed and investigated. His treatment of the plague is unique in addition because he didn’t merely observe its effects: he contracted the disease and recovered from it.

Thucydides’ tracks their plague as it allegedly moved from Egypt through the Persian Empire and into Greece just as our media covered COVID-19’s spread across the world. He lays out the symptoms of a disease that has still not been positively identified. Above all, Thucydides describes despair as the “most terrible feature of the sickness.” Depression and fear struck anyone who thought they were getting sick and how the most fatalities arose from people “contracting the deeds by caring for one another.”

Anxiety, depression, and helplessness have certainly been ancillary symptoms of COVID-19, even for people who have not contracted the disease. What Thucydides’ short description has trouble conveying, however, is the cumulative effect of this stress over time; even though we have experts warning us that COVID19 fatigue threatens to cause poor decision making, we aren’t publicly acknowledging how much fear and exhaustion is shaping our policies.

Few people I know made it through 2020 and 2021 without anxiety about someone they know getting sick or falling to COVID-19 themselves. Like Thucydides, many of us have been seeing the world the plague through professional and personal frames. Even though my spouse and I were both vaccinated along with our two older children, we all came down with COVID in early January and spent the next few weeks recovering from the direct symptoms and coping with indirect anger and depression at two years of inconsistent and ineffective policies.

Plague narratives take little interest in the nameless masses who suffer and die and instead focus on the leaders who allow it to happen. Thucydides presents a departure because he focuses on the deaths and the suffering of the many, but not without implicating those who lead them. He begins the narrative of the plague soon after Pericles’ famous funeral oration, juxtaposing the leader’s greatest rhetorical moment with his most disastrous failure. Pericles himself died of the plague in 429 BCE. The plague did not cause the Athenians to lose their war to the Spartans–they took care of that on their own through years of in-fighting and poor decisions.

Ancient Greek myth and history weaves together the very themes that animate our news and shape our lives today. Even as another wave of COVID-19 begins its decline, we find ourselves looking at the specter of an international conflict following Russia’s invasion of Ukraine. The dynamic pattern of leaders ignoring experts amid the suffering of the people is at play in our response to climate change too. Our future survival may hinge on accepting how little our stories have changed and learning from our own mistakes.

Plague stories show how human organizations fail and succeed. But while many of us think of Greek stories as being all about fate and the gods, Zeus observes in Homer’s “Odyssey,” that “Humans are always blaming the gods for their suffering / but they experience pain beyond their fate because of their own recklessness.” I believe that part of the epic’s lesson is that the flip side of the coin is true too: if we make our lives worse than they must be because of our recklessness, perhaps we can make them better with compassion and prudence too.

Joel Christensen is Professor and Chair in the Department of Classical Studies at Brandeis University. Professor Christensen has been a Fellow at the Center for Hellenic Studies (2013) and has received the Society for Classical Studies’ Award for Excellence in Teaching at the Collegiate Level (2013).He has published a “Beginner’s Guide to Homer” (One World, 2013) and also a “Homer’s Thebes” (CHS, 2019) with Elton T. E. Barker as well as “A Commentary on the Homeric Battle of Frogs and Mice” (Bloomsbury, 2018) with Erik Robinson. In 2020, he published “The Many-Minded Man: the Odyssey, Psychology, and the Therapy of Epic” with Cornell University Press.