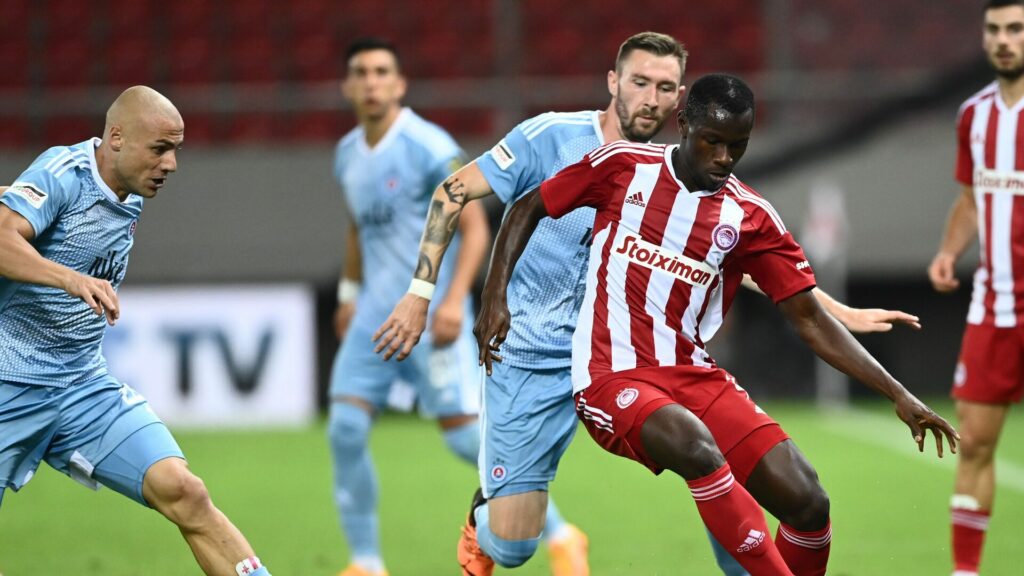 From the Europa League 2022-2023 between Olympiacos and Bratislava. Photo: Geiorgos MathaiosEUROKINISSI

A timely equaliser has ensured Olympiacos enter the second leg of their Europa League tie with SK Slovan Bratsilava on level terms, though they may regret failing once again to maximise their home ground advantage.

The Piraeus giants fought their way to a 1-1 stalemate at “Karaiskakis” against the Slovak champions on Friday morning (AEST) in the first leg of their Europa League third qualifying round tie.

The visitors pounced on an error by centre half Sokratis Papastathopoulos to take a shocking lead via winger Andre Green (63′), who expertly buried his one-on-one opportunity into the bottom right.

Olympiacos launched waves of pressure until they finally broke through their opponents’ defences through super-sub Youssef El Arabi’s late corner header goal (86′), giving his side a much-needed boost going into next week’s reverse fixture.

Panathinaikos recorded a disappointing loss to SK Slavia Prague in their return to European competition, falling 2-0 away in the first leg of the Europa Conference League third qualifying round.

The Greens battled hard but it was a double blow of Sebastian Palacios’ second yellow red (40′) and a goal from Ivan Schranz following a corner (45+2′) which ended their first 45 minutes back in Europe on a sour note.

Things looked to pick up for the “Trifylli” in the second period, with defender Eduardo Santos’ second yellow (52′) equalising the number of players on the field again, before a quick attack was soon polished off by Moses Usor (56′) to give the Czechs great chances of progressing.

Aris also lost 2-0 in their away continental fixture with Maccabi Tel Aviv, capping off a poor outing for Greece’s clubs.

Djordje Jovanovic released a grounded effort into the bottom right to give the Israeli side the lead (29′).

Teammate Eran Zahavi followed suit (86′), with his shot coming from the edge of the box and going into the bottom left, to bury the game and put the Thessaloniki club in huge danger of elimination.

Apollon Limassol suffered a heartbreaking 4-0 away loss to Maccabi Haifa in the first match of their Champions League third qualifying round tie on Thursday morning, all but guaranteeing a Europa League berth.

The Israeli champions broke through 38 minutes in, thanks to an unfortunate deflection from a cross by defender Mathieu Peybernes.

The hosts took full control in the second half, with midfielder Ali Mohamed scoring twice through a volley into an almost-empty net (54′) and then via a header from close range (62′), before Frantzdy Pierrot’s own header (79′) finished what was a fantastic display.

The Serbian side struck first after a well-worked play drew the goalkeeper out, allowing winger Queensy Menig to collect the ball and aim it away from the desperate, diving defenders (18′).

The yellow-greens made great use of their corner set-pieces to overcome the deficit, with left back Angel Cabezali scoring a volley following a corner set-piece (34′) before defender Hrvoke Milicevic also buried an effort from close range after a corner delivery (70′).

APOEL downed FC Kyzylzhar SK 1-0 at home in the first contest of their Europa Conference League tie, thanks in large to a magnificent volley by Georgios Efrem from outside of the box which looped over the goalkeeper’s head (27′).