Andrews announced his government’s intention to increase advertising in independent multicultural media from 5 percent to 15 percent if re-elected. 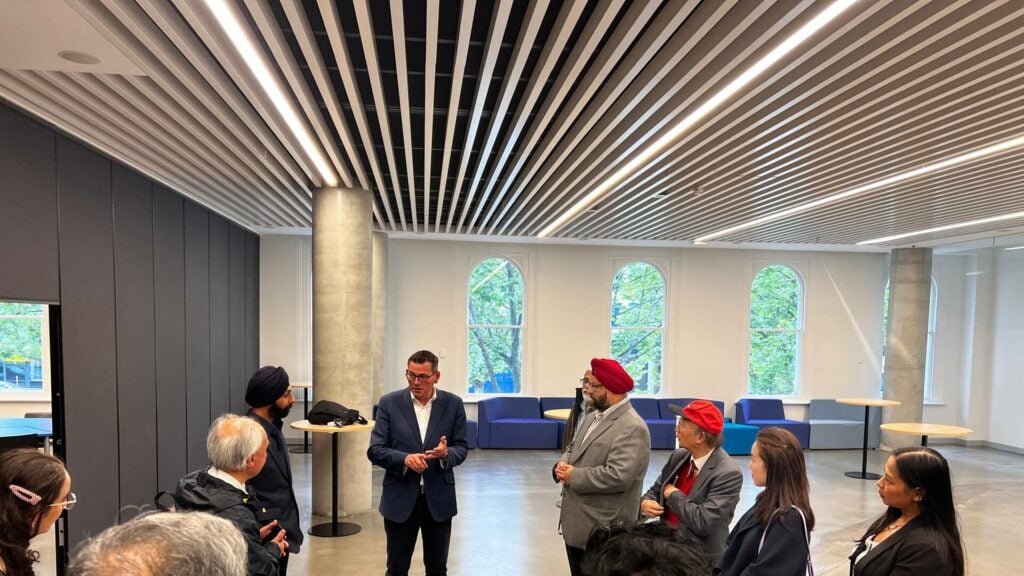 On Tuesday evening Premier Dan Andrews made a surprise appearance at a scheduled multicultural media conference originally called by the Minister for Multicultural Affairs Ros Spence. Instead of minister Spence, the premier arrived.

The premier then went on to announce his government’s intention to increase advertising in independent multicultural media from what it is now, 5 per cent to 15 per cent, if Labor is re-elected.

In front of Indian, Greek, Italian, Chinese and other media, the premier said that multicultural media played a played critical role during Victoria’s two years of Covid pandemic lockdowns.

“Getting the message out there, getting information out there, giving people the confidence, and getting all engaged, you guys played critical role in that.”

Many multicultural communities were particularly hit by conspiracy theories and misinformation, and it was independent media sought to counter it.

“I know that there’s been some tough times as advertising revenue fell during those Covid times, and the $2.9 million worth of support provided got you through is important,” the premier said, referring to a grants program to support multicultural media during the pandemic.

The Victorian premier said that as “we look to 2023 with a real sense of confidence, and optimism”, and coming out of what he called “Covid exceptionalism, that we’ve had to have in place being something of the past” that it was, it’s now time for us to take another step forward.

Andrews said that the existing commitment of 5 per cent of advertising being spent on multicultural media was adjusted by being more targeted on how much was spent on SBS.

He said he was “in no way critical of SBS” but that the SBS portion of the government’s advertising had become more targeted, “given SBS become very targeted in some parts and more generalists in others, so not at SBS’ expense you guys got a bigger share”.

Because of that, the premier went on to say that over the last three years the Victorian government was spending closer to 10 per cent of on independent multicultural media outside what they spent on SBS.

The effort was, the premier said, “put into making sure that every community gets the message, whether it’s fire, flood, other safety programmes and Covid” communications.

If Labor are re-elected, Andrews said they would bump multicultural media advertising from 5 per cent to 15 per cent.

“I’m very confident, it’s a bit of a stretch, but we’ll get there. I think the fact that we’re almost delivering 10%, I’ve got the actual numbers here, which may surprise you.”

The premier said that he wanted to ensure that independent multicultural media had the revenue it needed, “to thrive, to keep telling the story, to keep being a trusted voice, to keep making sure that everyone is getting the information they need to participate, to be part of this brilliant multiculturalism that defines us.”

“Multiculturalism is not an add on. It’s not nice to have. It’s us, it’s who we are,” premier Andrews said.

“I think more so than any other state, we don’t tolerate multiculturalism, we celebrate it, and it’s a critically important thing.”

“You’ll be able to bid into that fund with different ideas, different projects, different things that you need”.

After the announcement premier Andrews invited all the attendees onto the campaign bus and took them around parts of Carlton.

In the campaign bus the premier talked about government’s work to fight extreme right wing hate groups and his government’s policies in health, infrastructure, his focus on manufacturing, and jobs.

He was asked on what he thought of the Opposition placing Labor last on their preferences, and he said he was dismayed. He questioned how the Coalition can openly support multiculturalism yet place extreme right wing fringe parties against multiculturalism above Labor.