He was bidding to become the first player from Greece to win a Grand Slam title-The 22-year-old Greek tennis player was also seeking to become the youngest men’s singles champion since Juan Martin del Potro won the title at the US Open in 2009, aged 20 years and 355 days. 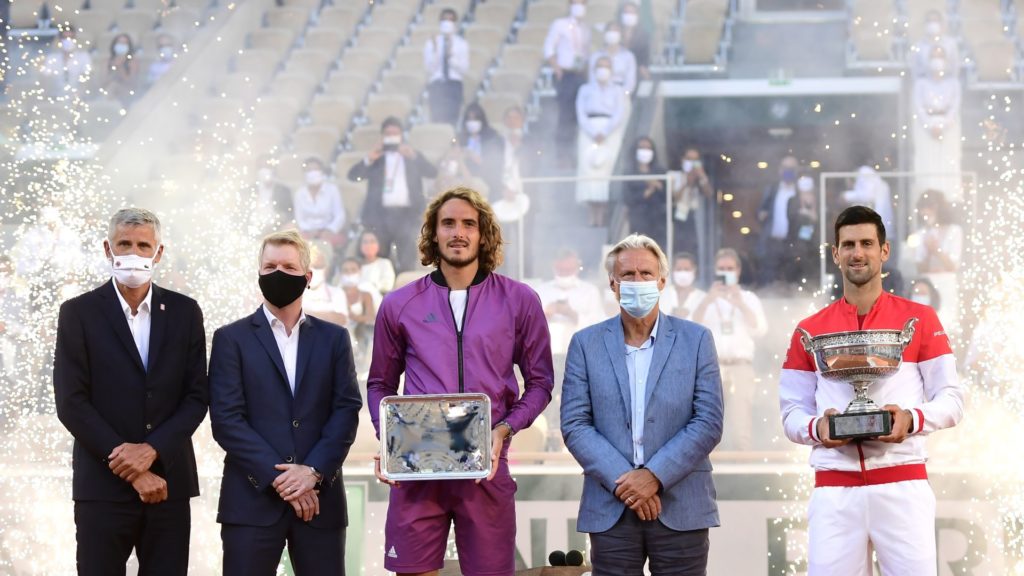 Novak Djokovic of Serbia celebrates with his trophy after winning against Stefanos Tsitsipas of Greece during their final match at the French Open tennis tournament at Roland Garros in Paris,. Photo: APE-MPE via EPA/CAROLINE BLUMBERG

Down two sets, but never down and out. World No. 1 Novak Djokovic completed a mammoth turnaround in the Roland Garros final on Sunday to take down Stefanos Tsitsipas 6-7(6), 2-6, 6-3, 6-2, 6-4 and lift his second Coupe des Mousquetaires trophy – his 19th Grand Slam triumph.

When Stefanos Tsitsipas had seen his first grand slam final dream buried, he sank into his changeover chair and buried his head in a towel.

Novak Djokovic has that effect on opponents.

“What I learned today is that no matter what, in order for the match to be finished, you have to win three sets and not two,” Tsitsipas admitted.

Tsitsipas was treated after the third set for a hip issue but dismissed it as a factor.

He was the youngest men’s finalist at Roland Garros since Rafael Nadal won the title in 2008, and was trying to become the first Greek to win a grand slam title.

“Despite my loss today, I have faith in my game,” Tsitsipas said. “I very much believe I can get to that point very soon. I was close today.”

The victory sealed a historic feat for Djokovic, making him the first player in the Open Era – and only the third player in history – to achieve the career Grand Slam twice. Roy Emerson and Rod Laver are the only men to have won each Grand Slam on two or more occasions.

Tsitsipas, who fought past Alexander Zverev in five sets in the semi-finals, was quick off the mark against Djokovic on Court Philippe-Chatrier. The Greek player was bidding to become the first player from his country to win a Grand Slam title, and he made his case early on after firing three aces to save two break points in his first service game.

The Greek player withstood the heavy pressure of having Djokovic, one of the best returners in the game, standing across the net as he controlled the first two sets with his powerful serve. Tsitsipas narrowly kept his edge as Djokovic continued to press, regularly pulling Djokovic out wide in cross-court rallies before finding down-the-line winners with his forehand.

Djokovic outlasted Tsitsipas in a 26-shot rally to save set point at 5-4, and claimed the first break of the match to serve for the set at 6-5.

Tsitsipas was bidding for his first Grand Slam title in his first appearance in a major final. The 22-year-old was also seeking to become the youngest men’s singles champion since Juan Martin del Potro won the title at the US Open in 2009, aged 20 years and 355 days.