Prominent Greek Australians promise to work together to help Greece 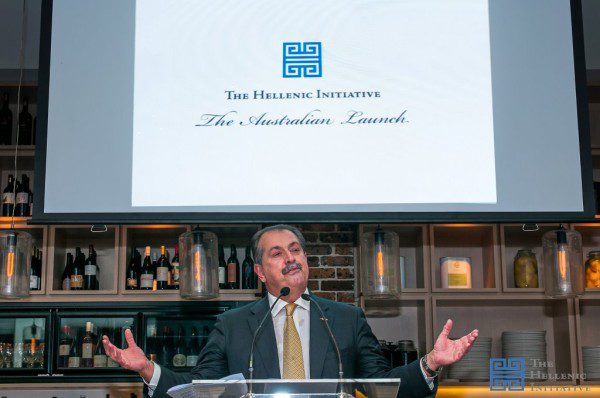 Promises were made by prominent members of the Greek Australian community to work together with Greece at the launch of The Hellenic Initiative Australia in Sydney last week.

One hundred and fifty invitees from across the states and territories of Australia, a cross section of the who is who in many ways of the Greek Australian community, business people, entrepreneurs, bankers, lawyers, doctors, together with philhellenes of non-Greek background, launched the newest chapter in the history of The Hellenic Initiative (THI). This global U.S. based non-profit, secular institution, launched in Athens in 2012, is made up of members of the Greek diaspora and philhellenes committed to helping Greece through focused programs of crisis relief, entrepreneurship and economic development.

The event was held at the Hellenic Club of Sydney’s new Alpha Restaurant. Master of Ceremonies was Helen Kapalos of the Seven Network’s Sunday Night program, and THI Chairman Andrew N. Liveris was the keynote speaker. The organizing committee included Nick Mitaros, Nick Pappas, George Giovas, Greg Gav and Penny Maragiannis. Joining the event from the US were THI Executive Committee member Dean Dakolias and supporters John and Mae Calamos.

Mr Liveris, in his introductory speech stated that Greece can meet successfully all of its challenges today. This effort he said, is attempting to tap the Greek diaspora in order to make as big a difference as possible as quickly as possible. “If not us, who? If not now, when?”, he repeated the belief that drove the foundation members of The Hellenic Initiative, while calling the Greek Australian community to join the global effort to help Greece .

The Initiative is built to last he said, the effort is focused on Greece in 2050, its programs are independent from the Greek government, the church or any other Greek Institution and we treat all of our specific actions like targeted investments.

THI, as repeated by Mr Liveris, is committed to protect essential relief services under siege in Greece, is working to foster a new culture of entrepreneurship and is attempting to empower the Greek people in order to make the economy of the country more competitive in areas such as tourism and hospitality, food export, energy and information technology.

Deputy Foreign Minister of Greece Kyriakos Gerontopoulos, addressing the Australian launch of The Hellenic Initiative highlighted the fact that Greece is leaving its crisis behind, having achieved in 2013 a primary budget surplus, and expecting economic growth in 2014. He also stated that the structural reforms of the Greek government have improved the prospects of investment and growth and stressed his belief that the Greek communities in Australia and in the United States will support in every possible way the efforts of Greece to recover.

George Giovas, a Managing Director of Axius Partners, a firm that provides Fund Management and Capital Solutions and a member of the event organizing committee, said that last week’s event was the beginning of a discussion about how Greece got to where it is today and what must change to live up to its potential. “We started a conversation about how we as Greek Australians can promote recovery and renewal in Greece, and we invited feedback, new ideas and constructive criticism.

At the end of the day we are looking for partners who will step up and build something with us. And so far the response has been outstanding”, he stated.

Mr Giovas said that the aim of THI in Australia is to have a nationwide presence, and highlighted another dimension of the organisation. “The Initiative is first and foremost about helping Greece, but it is also about us, it is about our culture and identity, it is about our children, about maintain our community in Australia, by working Oloi Mazi-All Together,” he said.