George Parthimos presents his plan for an innovation centre linking Melbourne and Detroit, to develop applications for internet-connected vehicles 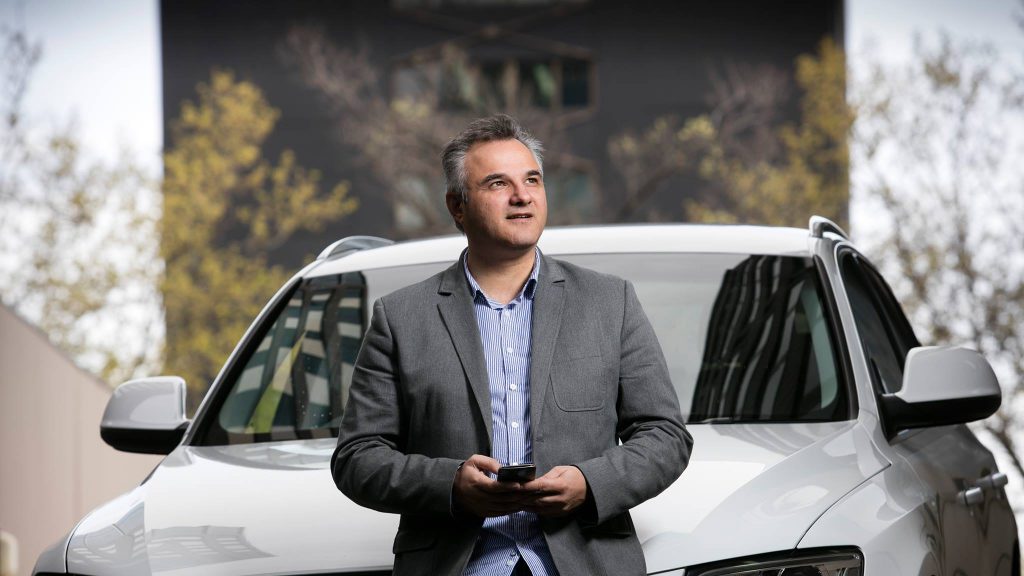 An automobile revolution is under way, led by the Melbourne-based software company Connexion Media, which caters to what is emerging as the car industry’s most pressing demand: applications for smart cars. With the prediction that 90 per cent of cars (that is, approximately 250 million vehicles) will be connected to the internet by 2020, auto manufacturers are eager to embed new applications to their ‘smart cars’ sooner rather than later.
Enter George Parthimos. His clients include some of the biggest car companies, such as Peugeot, Mercedes-Benz and Honda – not to mention General Motors and Ford, the first major companies to use the services of Connexion Media, listed onto the ASX in August 2014. The company’s claim to fame was the development of two applications designed for the interconnection of smart phones and cars: the miRoamer, which brings internet stations to car radio; and Flex, an application that not only helps users locate their car in real time, but also monitors diagnostics, such as engine performance, fuel consumption and driver behaviour. The latter is showing the way for the company’s future projects, especially as it aims to address concerns for security threats, given that internet-connected cars might become vulnerable to hackers, who could take control of them.
Another issue of concern is that of distraction to the driver, as most of the smart car users’ demands lean towards infotainment, which will have the vehicles operate in a way similar to computer tablets, with their own app stores run by the car makers, from which the drivers would download upgrades and various applications.
Among the ones most likely to be introduced in the near future is the Cheap Fuel Finder, an application that would have the car scan through all the petrol stations in a certain area in order to find the cheapest offer and use the GPS to navigate towards it. Another variation of the app would allow the car to locate parking stations, reserve a spot and automatically pay for it, as it will be linked with a credit card service. Similarly, as cars are already equipped with apps to monitor engine performance, they will be able to assess whether a service is needed, based on a series of data, not least of all the number of kilometres run, and automatically book for service, which will then have to be confirmed by the driver. Even more appealing to most drivers is the app which would introduce upgrades to reconfigure the way a car operates, such as an ‘economy mode’, a ‘green mode’, or even a ‘sports car mode’, which would increase the engine’s performance.

“Australia is very highly regarded internationally for technology startup and for early stage development businesses. Where we fall over is that we don’t have capital support in order to proceed to commercialisation … We have great ideas, but we’re terrible at execution.”

AN INNOVATION CENTRE FOR SMART CARS IN MELBOURNE

Given its status as an ASX-listed car software company and a leader in its field, Connexion Media has even more ambitious plans for its role as a factor of innovation in the Victorian economy environment, linking local startups with major industry players. For this purpose, George Parthimos plans an innovation centre for internet-connected cars to be established in Melbourne with a sister site in Detroit, home to major manufacturers Ford, General Motors and Fiat Chrysler. With this initiative, Connexion Media will use its experience and position in the market to function as a liaison between the Victorian government and the city of Detroit, but also between startups and investors, notably private equity and venture capital groups interested in innovative entrepreneurship.
“We’ve met with the minister of industry of Victoria, Lily D’Ambrosio, in order to discuss the concept behind this innovation centre and the fact that her counterparts in Detroit are ready to work with Australia,” George Parthimos tells Neos Kosmos. “She was very interested and we have began planning the centre, with the help of the state. Its goal will be the commercialisation of the high-tech products developed by start-ups that don’t have access to the market at the moment. Australia is very highly regarded internationally for technology startup and for early stage development businesses. Where we fall over is that we don’t have capital support in order to proceed to commercialisation, so that these products will get abroad. There are a lot of startups that for whatever reason have to go offshore. We have great ideas, but we’re terrible at execution. Given our direct relationship with the big car manufacturers, we can facilitate this process. Every time I get in touch with our clients, they all ask the same question: ‘George, what else have you got?’ We can’t do everything, this is why we want to work with companies that have got ideas,”
The total cost of this centre is estimated at $5 million. The state of Victoria has already promised a grant but there is also interest from investors and private fund groups.
“We have been told that the federal government is also interested in getting involved but we are still looking into it.”