Is the honeymoon over?

What the Cyprus parliamentary elections have taught us 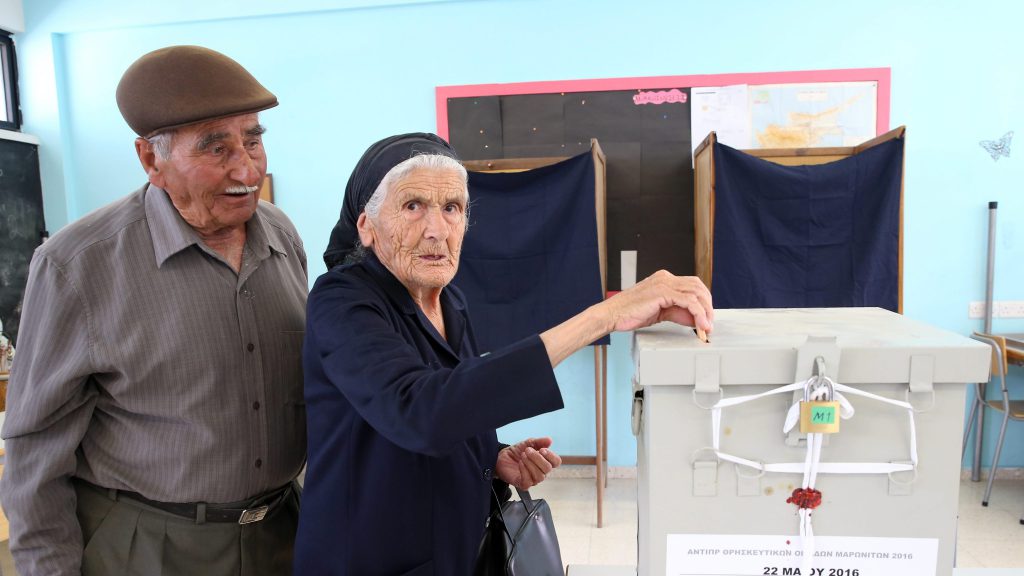 An elderly Greek Cypriot living in Karmakitis in the northern Turkish-occupied areas of the republic votes in the southern government-controlled part of the country, in Nicosia, Cyprus on 22 May. PHOTO: AAP via EPA/KATIA CHRISTODOULOU.

The parliamentary election results in Cyprus have shaken the political system to its foundations and things will never be the same again.

A Revolution of the Mind has finally begun and citizens dare to stand up and take action against the status quo without fear of repercussions. After so many years of apathy they have discovered the power to change things and make good things happen. That can be attributed to political maturity and the courage to speak out. And so people did at the ballot box, with shattering results.

There are now eight (from four) political parties in Parliament and Kommata such as AKEL and DISY have seen their parliamentary seats reduced. Finally voters have turned against kommatokratia (politicocracy) and that’s good news.

The outcome of the elections clearly shows that the political dinosaurs have lost the trust of the people. Not only that, but the party leaders personally have been humiliated by their incompetence to keep membership in support of their party. Over 100,000 party-members transferred their votes to smaller parties as a form of rebelliousness and have given a brutal slap on party hierarchy.

This is a positive direction for democracy.

People’s disillusionment was so high that ELAM (a new extreme nationalistic pasty) has won two seats in parliament – the May 22 election saw to that. There were 542,915 registered voters in total with a less than 67 per cent turnout at the polls. One third of voters (33.5 per cent) have chosen to abstain or cast a white/blank vote.

Overnight, the ‘abstention/blank vote’ has become the largest ‘political party’, and if officially recognised as a cast vote ‘against’ in line with the existing EU weighted-majority-voting procedure, it would form a serious bloc and become a powerful citizens’ non-ideological political movement to be reckoned with. The existing parties balk at the prospect of such a possibility as they do with the introduction of horizontal voting.

This is the highest abstention/blank vote since the inception of the Republic of Cyprus in 1960. Making matters worse, more than 30,000 young voters did not bother to register. Disillusioned by corruption and petty-political shenanigans, their answer was “leave me alone.” This means the abstention rate is even higher and a crushing defeat for a political structure that turned its back on serving and representing the electorate.

The unprecedented results are an indication of the government’s popularity and serve as a gauge of things to come. In fact, the president was utterly shocked by the punishment his party has received and admitted his disappointment for underestimating the feelings of the people.

Sunday’s election results may now become the catalyst necessary to trigger real changes and force the government to re-evaluate its current national and domestic policies, which clearly do not meet people’s expectations.

Cyprus in fact faces an array of obstacles to overcome but also with the EU and western powers pressuring the government to reach a Bi-zonal, Bi-communal Federation (BBF) agreement this year. The greatest threat of all remains Ankara’s clever transformation of its military invasion of the island to one of irreconcilable ethnic and religious differences. This cunning myth peddled by Turkey’s clever diplomacy has taken root in contrast to Cyprus’s passive policy that has been lured straight into Turkey’s trap.

At the Davos Summit this year, Cypriots saw one of those clever Turkish traps in action. President Anastasiades was convinced that the new Turkish Cypriot leader Mustafa Akinci was the person to negotiate and resolve the Cyprus issue. As a gesture of goodwill and camaraderie, he invited the TC leader to take part as his equal at the Davos Economic Summit of heads of states. The outcome of that gesture whetted Ankara’s appetite and opened up the floodgates for more.

No sooner were Sunday’s elections over than the biggest blunder of all surfaced at the UN World Humanitarian Summit in Constantinople. As a matter of principle, instead of declining the UN invitation, Mr Anastasiades decided to attend the summit reassured by the UN that the TC leader would not be there. Logically, the president had no place participating in such a ‘humanitarian’ summit held in a country that occupies 40 per cent of his own country and unilaterally refuses to recognise the republic. What was the thinking behind such an irrational political move?

Duped, Mr Anastasiades fell straight into Ankara’s hands. The summit offered President Recep Tayyip Erdogan a great opportunity to try and establish international recognition of the Turkish Republic of Northern Cyprus (TRNC) but equally to exonerate Turkey’s military invasion of the island; with his notorious deviousness he set his plan into motion.

On the sly he sent his presidential plane to Cyprus and picked up the Turkish Cypriot leader Mustafa Akinci to attend the official dinner of heads of state. This was held at his 1,000-room presidential White Palace (Ak Saray) second in size to the White House in Washington. The objective was to introduce Mr Akinci as the ‘president’ of the TRNC. At the last minute, Anastasiades was informed by UN envoy Espen Barth Eide of the unexpected arrival of Akinci for dinner, but the crafty plan did not stop there: a private meeting between Akinci and UN Secretary General Ban Ki-moon had also been arranged by him on the quiet.

Once the stench was detected, it prompted Anastasiades to angrily expedite his departure from Turkey and refuse to attend the official dinner. It was the right decision. Feeling betrayed and conned by Turkey and others, the president immediately cancelled all further meetings with Akinci including the UN envoy, now exposed for playing double standards. Who was behind those moves is yet to be revealed – if ever.

For his actions, Espen Barth Eide should be removed in line with the previous UN representative Mr Downer, who also behaved impartially against the republic in support of Ankara. One can only ask why such insincerity by the UN institution?

If it were not for Sunday’s rebellious election results, the outcome of this political fiasco in Constantinople would have gone unnoticed. Thankfully, the president received the message and had to take the bull by the horns and show leadership; a leadership Cypriots have been hungry for for so many years. Now only time will tell if the president will actually deliver; he is known for making U-turns on a number of crucial issues – the bail-in robbery being one of them.

Instead of an apology coming from the UN envoy, Turkey and Akinci for the disrespect in protocol they had shown on undermining the president of Cyprus, Turkey retaliated and decided to play the worst game of all; the religious game.

For no other apparent reason, Tahsin Ertugruloglu, the ‘foreign minister’ of the TRNC, announced the very next day (probably ordered by Ankara) that all Orthodox Christian churches in the occupied area would be shut. Churches will only be allowed to open once a year to hold a religious service at Christmas, Easter or the Name Day of the church as long as permission is granted beforehand from the appropriate ‘authorities’. In comparison, Turkish Cypriot Muslims are welcome and are free to practice the faith in their mosques located across the island without restrictions. Ankara’s provocative decision goes well against the principle of good faith.

Those tactics applied against Greek Cypriots and the republic certainly calls for a change of the current national policy. It would be politically prudent to stop all further negotiations until Turkey comes to its senses to negotiate with honesty as a civilised nation. It is pointless to continue talks with Mr Akinci, a TC leader who does not have the power to make decisions. Why the charade of negotiations at all?

The undermining treatment the president has received from the UN calls for a new strategic plan – the current one has proven to be flawed. New defence and trade alliances are necessary with powerful nations such as Russia, which has always stood in support and defence of Cyprus while others played double standards to protect their own geopolitical and economic interests.

Has the government truly got the message from Constantinople and the electorate? One surely hopes so …

* Andreas C Chrysafis is an author, freelance writer and artist.