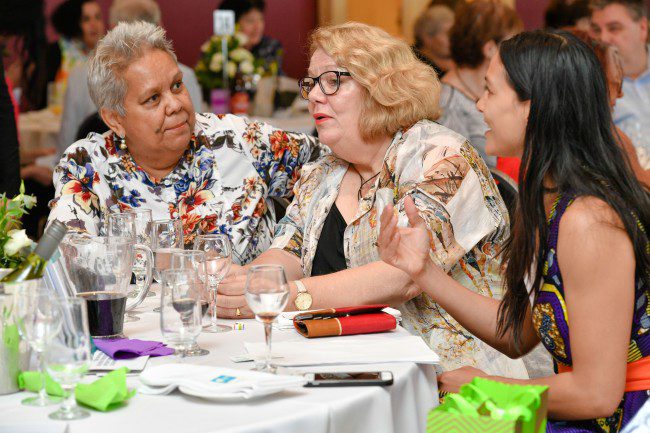 The 2017 function was jointly organised with Manningham City Council and sponsored by Delphi Bank. The event was sold out with over 170 guests in attendance.

“A big thank you to all our esteemed guests and volunteers for helping us realise this year’s luncheon,” president Varvara Ioannou said, in her welcoming address.

“I invite men and women to help make a difference for the girls of this world and create a better future for them, a future of equal opportunities and parity.”
Mrs Ioannou talked about the Network’s achievements since its establishment in 2001 and its long history of mentoring and promoting young women such as this year’s sponsoree, Anastasia Marinakou.

Middle distance runner Marinakou, 21, holds the Greek record for 1,500m and was voted top young Greek Athlete in 2015. She has since relocated to Melbourne to pursue her dreams, and recently run alongside eight-time Olympic Gold medallist and eleven-time world champion Ussain Bolt.

As part of its aim to connect cultures, generations, and professions while promoting female empowerment, FFTN welcomed National Congress of Australia’s First Peoples Chairwoman historian and author, Dr Jackie Huggins AM alongside Victorian Women’s Trust convenor and founding member of Australian Women in Agriculture Alana Johnson. Last but not least, Human Rights Arts and Film Festival founder and chairwoman, barrister, and lecturer Evelyn Tadros talked about owning her cultural identity and using that as motivation. In a conversation led by human rights advocate Maria Dimopoulos, the three women shared their inspiring stories, speaking into the hearts of the audience.

“Learn your history, the history of your country, the history of this country,” Dr Jackie Huggins stressed. “It was at school when I realised who I truly am. When a teacher asked all Australian kids to stand up, we all stood up. Then he asked everyone except me to sit and explained that it was me, the Aboriginal, who has welcomed the rest of them to my country. This made me feel so proud, coming from my teacher.”

“But there are good and bad teachers,” Huggins paused. “If you are a teacher, make your power a power to inspire good. During my final year, I was told I couldn’t go to Year 12 because I was an Aboriginal ‘and Aboriginals don’t have brains’ by another teacher. It wasn’t until I turned 21 that a different teacher urged me to pursue my dreams and be who I wanted to be. And I went back to school and I was moved and inspired and excelled. And became a doctor!”

In a similar way, Alana Johnson, from a family with a history in farming spanning five generations, spoke about women in agriculture and their struggles in a male-dominated area.

“We have women from all over the world, indigenous women of course and many migrant women working on farms in Australia for years, yet have no rights and no power no ability to even own land.”

“So many young women are now choosing to move into agriculture and veterinary science – they choose that as their profession – but we need more support from men and other women to truly inspire change.”

Evelyn Tadros talked about founding the Human Rights arts and Film Festival – an annual festival that travels around Australia – ten years ago in a small room.

“I came up with the idea and at first I was only able to engage three people, then ten, then over a hundred creatives… to the point where we have had more than 80,000 people that attend the festival overall. This is a loud and clear massage for me; we should do it from our level, don’t rely on politicians, don’t rely on anybody else but ourselves to bring change,” she said.

“A mix of Middle Eastern and Asian heritage myself, I realised early on that I was different. At school, I had to belong and I chose to be a ‘wog’. Proud of who I am I became a barrister and I’m fighting for human rights. There are various forces constantly undermining our institutions and our faith in human rights and we really need to come together and realise that we all are entitled to them.

Surprisingly, Australia is actually the only Western democratic country without any type of human rights legislation. The government can make laws which do violate human rights and a very good example of that is the treatment of asylum seekers and refugees.”

An addition to the panel, singer and artist Asseel Tayah from East Jerusalem came to share the gut-wrenching story of war. She did that with an old song women would get together and chant whilst waiting for their men to return from the front, that brought the entire room to tears.

Following the lunchbreak, the audience addressed questions to the speakers while FFTN Committee member Alex Nitsos coordinated the raffle for the sponsoree, raising over $2,300 towards Marinakou’s training expenses in Australia.

The event ended on a high note, with a solo guitar performance by singer and musician Anthea Sidiropoulos.

For more information head to www.fftn.org.au