Meet the team making Mykonos a destination for craft beer

The founders of Mykonos Brewing Company are a prime example of the entrepreneurial spirit coming out of Greece during the crisis, offering locals and tourists a deliciously unique experience with a concept steeped in antiquity The craft beer movement has taken off in Greece and part of that movement are Angelos Ferous and Janos Bako. The pair started out making beer at home in a mission to prove they could make tasty craft beer for a fraction of the cost of the liquor store’s offerings, and today are certified brewers, distillers and co-founders of Mykonos Brewing Company and Mikonu beer.

We are designing more recipes and targeting to make nine different beers through our first three years, looking to become the first Greek experimental brewery!

After completing their studies, Angelos, 27, and Janos, 32, met while working at BrewDog, Scotland’s largest microbrewery where their experience consisted of producing 63 different styles of beers.

Then, almost two years ago, they started plans on Mykonos Brewing Company, in part inspired by their partner, winemaker Yannis Paraskevopoulos who set up the impressive infrastructure on the island. Businessman Yanis Myzalis designed the commercial policy, and brewers Angelos and Janos took care of the entire production and product design.

“As a winemaker, Yannis firmly believed that in order to have good wine one must have a good vine and to have that, one needs to wait for at least eight years. With beer, however, you may have your brewery regardless of whether it’s raining or not and you can produce beer more than once a year. You can brew every month, which means you can very quickly perfect your product and serve the demand,” Angelos told Neos Kosmos.
While the brewery is still in its infancy – they started brewing in March earlier this year and made their first sale in May due to a major holdup on their bottling line – there’s no denying their entrepreneurial spirit. Angelos and Janos are committed to their vision for a unique, good quality local product and have their sights firmly set on growing both on the island and abroad.

“We are the four parents who have joined forces to create Mikonu beer. Everyone has their part, we are a functional team. At this time of financial crisis we need to do more to survive, we need to be more flexible and daring. Luck is 51 per cent, the rest is skill and work!” Angelos explains.

“In Mykonos we want to do something that hasn’t been done before; strong beers that highlight the land and bring something new to the world of brewing in Greece.” 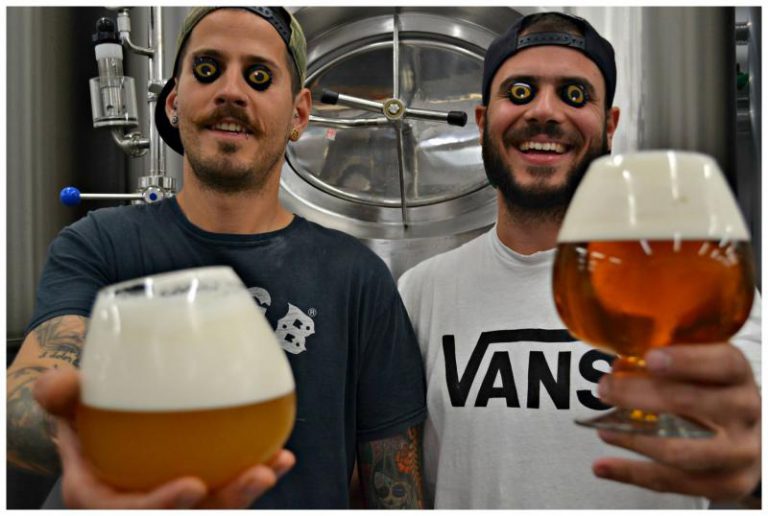 As the summer season draws to a close, we reached out to Angelos on Mykonos to find out more about their start-up, and why it should be the next name on beer lists the world over.

What led to the launch of Mykonos Brewing Company? Why did the team decide the brewery would have a Mykonian focus?

We were greatly inspired by the worldwide craft beer boom which was essentially a big realisation that there is more to taste in beer than just what you can find on the supermarket shelf. Another realisation, from the brewer’s standpoint, is that there are more ingredients and techniques to brew with other than the ones already in existence. These realisations created a need which was the major influence in making us quit our previous jobs and start our own microbrewery.
Mykonos is a popular, beautiful and unique destination welcoming millions of visitors annually. As a craft brewery we could not wish for a better crowd to serve. The high turnover of people visiting throughout the year is a perfect canvas for us to brew on since people come here to have a new experience, which is what craft brewing is all about.
Also, being located in a place like Mykonos means that our crowd is not constant. People flock to the island to have a unique experience which they will take back to where they came from. Unique, small batch experimental beer should surely be part of that. On the other hand, this constant revolving audience can oppose a sizeable threat for a small business. It’s a great challenge having to communicate and reintroduce your brand daily to an audience which is constantly changing.
Last, but not least, we need to give credit to the island’s tourism industry. Decades of touristic prosperity has provided infrastructure to facilitate an exclusive and glowing resort, offering high quality services and entertainment, situated in this truly unique Mediterranean setting.

While some of our readers would have tried your beer while in Greece over the summer, for those who haven’t had the pleasure as yet, how would you describe the taste? Can you compare it to any other styles of beer?

We wanted to design beers for Mykonos that would be different from what was there in the market, so we started up with two core-range beer styles. A blonde drinkable Saison (Farmhouse Ale) and a hoppy American-style pale ale.
The pale ale is a very special, bitter and fruity beer. Greeks are not used to this flavour but the Americans and Chinese love it. That’s why we created our flagship beer the Blonde Saison which is distinct and matches the multifaceted Mediterranean cuisine that the visitor will taste here. The balanced malt character background is a perfect canvas for a fruity and spicy aromatic profile that is created through the addition of old Belgian yeast strains and hops. This Belgian yeast strain consumes even the bigger of sugars, leaving the beer dry so the aftertaste is not sweet. It is white-blonde with huge foam and fruity yeast aromas such as cloves, pepper, lemon, citrus, wheat, and straw. The mouth is firm, dry with a taste of yeast, hops, honey, pepper, and lemon. The spicy side is perfect with a fruity finish and moderate hopping at 5 per cent ABV.

The pale ale is a hoppy, mildly bitter, highly aromatic ale; it pours clear, copper-gold with a light, foamy white head, a light sweet flavour with perfectly offsetting hops; lightly toasted grass, citrus rind with a touch of toasty malts; and light-bodied with fine to average carbonation. At 5.3 per cent ABV it has a crisp finish with light, subtle tropical fruits, light pine needles, some grass, orange citrus, and mango.

However we are restless, designing more recipes and targeting to make nine different beers through our first three years, looking to become the first Greek experimental brewery! We have planned some serious barrel-aged beers from Greek wineries, and some other exciting stuff that we will announce in due time. Sounds delicious! What has been the response of consumers so far?

The response to our beers has been overwhelming and very positive. Keep in mind that the Greek beer scene is almost entirely consisted of only lager beers – both at an industrial level and craft brewing level. So it was only natural to have quite a few locals finding our beers ‘too aromatic’ and ‘bitter’. Also bear in mind that for many locals, drinking a hoppy pale ale and a French farmhouse ale was a completely new experience as hops and old-Belgian yeast strains are something they have never come across before.
In our first hundred days we have encountered a very sudden demand for our product which is something not very common for a six-month-old start up. It is apparent to us that there was a need for an entirely-local Mykonian brewery that aimed strictly to the local market. Upon release we were quickly bombarded from local people and professionals that operate within the island to visit us in our brewery and see where the beer was actually being brewed!
At the moment we are a very small facility which means that we have a good grasp on the quality of our beers, which in turn means that we need to be cautious of the way we will be looking to expand to meet this demand and still be consistent. As Mykonos is quite seasonal we would be looking soon to correctly place our beers for export during our low season. We would love if Australia was part of that!

They say ‘don’t judge a book by its cover’, but I must admit, first-off I was quite taken by the design of your labels and subsequent marketing. What is the concept, and who designed them?

The concept was to create something unique, but still connected to the island. So far, all you could see in Mykonos from a marketing stand point was windmills and pelicans, so differentiating ourselves from this was very important for our identity. The designer of the brand is the talented Michalis Georgiou who, along with his great team at G-Design Studio, has created the Giants series for us.
The mythological stories of how Hercules defeated the Giants and buried them under the rocks of Mykonos have existed for many centuries and it was a story Mykonians were not very familiar with. We did our research, to say the least! According to the legend, in Mycenaen pre-historic times, Mykonos was inhabited by Giants. After defeating the Titans, the 12 Greek gods with the help of Hercules literally massacred the Giants and cursed them to be buried under the rocks of the island forever. We have come to surface these Giants and have liberated them from the eternal bounds. For us every character is a Giant and every Giant is a type of beer.

To find out more about Mykonos Brewing Company (currently the beer is only available in Greece), visit mikonu.gr/ or get social and follow them on Facebook and Instagram @mikonu.beer