In the latest Inspiring People Series, held on Tuesday 21 June, The Food for Thought Network (FFTN) was on a mission to educate and break down racial, generational and professional barriers 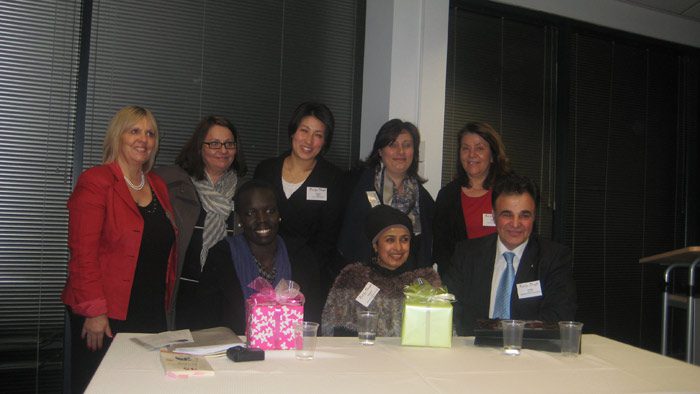 In the latest Inspiring People Series, held on Tuesday 21 June, The Food for Thought Network (FFTN) was on a mission to educate and break down racial, generational and professional barriers.

The first panel speaker, charismatic leader George Lekakis AO, executive director, Department of Business and Innovation, and former chairperson of the Victorian Multicultural Commission, proudly shared stories of influencing and working with premiers, ministers and leaders in all spheres of life to implement change in regard to multiculturalism at a very difficult time of uncertainty and “Islamophobia” following September 11 2001. In addition to his career achievements, he is a proud father of two children a daughter and a son.

Tasneem Chopra is a cultural diversity consultant and was the second speaker for the evening.

Tasneem was born in Kenya to Indian parents and migrated alongside her family to Australia, settling in Bendigo where she spent her teenage years.

Tasneem, a proud Muslim woman, started wearing the hijab as a representation of her spiritual identity when she began university. She stressed that she does not impose the wearing of the hijab on anyone, and in fact remarked that her mother, sisters and daughters do not wear it. She discussed the increased racism that Muslim women faced and continue to face after September 11 with an influx of complaints to the Equal Opportunity Board.

As the Chairperson of the Australian Islamic Women’s Centre of Human Rights she has been a catalyst for educating mainstream organisations about the needs of Muslim women.

Nyadol Nyuon, a 21 year-old Sudanese law student captivated the audience with her insightful descriptions of her life in a refugee camp in Kenya and her resettlement to Australia, leaving many moved to tears.

Life in the refugee camp felt normal to Nyuon who had spent the majority of her teenage life being exposed to mass malnutrition, abuse, rape and death. She recalled days of being without food as the fortnightly food drop from the United Nations would only last up to 10 days or would be stolen by local communities outside the refugee camp.

Nyuon acknowledged the importance of support and mentoring from people from more established communities towards refugees and asylum seekers.

The moderated discussion, led by FFTN president Varvara Ioannou, covered the speakers’ role models, their aspirations, learnings, achievements and the future challenges, whilst giving the audience the opportunity to ask questions. The evening allowed for quality networking over food and wine organised by the FFTN committee.

FFTN is celebrating 19 years. All profits will go toward supporting Michelle Errichiello to achieve her dreams of going to the 2012 London Para Olympics.

To find more about Food for Thought Network visit their website www.fftn.org.au