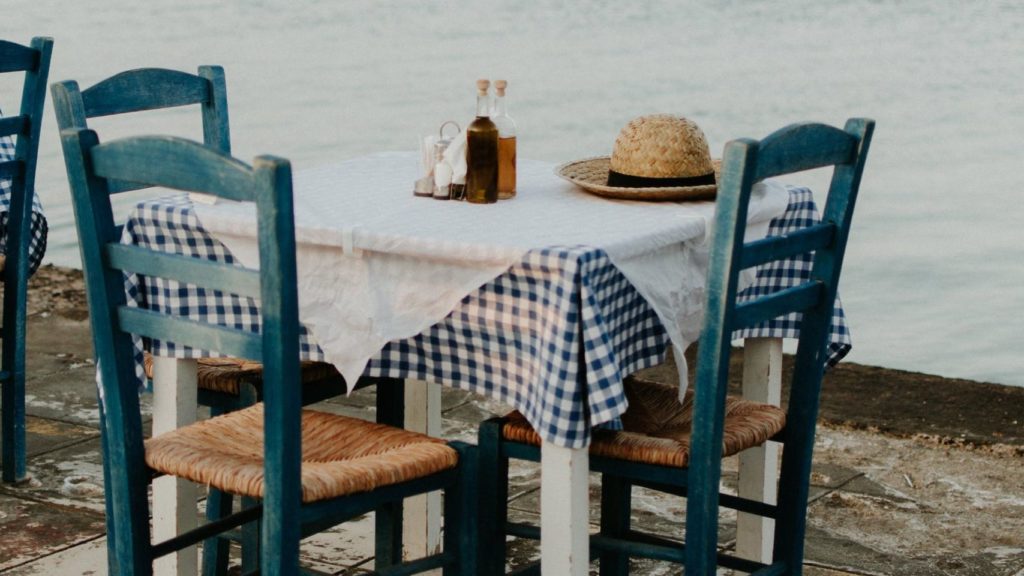 LANGUAGE BITES: GREEK
Get a taste of the Greek language over a traditional dinner at Jim’s Greek Tavern (32 Johnston St, Collingwood) on Wednesday 10 April from 6.30-8.30 pm. In a two-hour Language Bites workshop for Greek, you will learn how to pronounce your favourite Greek dishes and regional specialities, some basic words and greetings, and get an intro to the Greek alphabet, all while enjoying a classic Greek meal. No prior knowledge of Greek required; this workshop is designed for complete beginners. If you love eating Greek food, learning about new languages, cuisines and cultures, or have Greek friends/family or are thinking about visiting Greece, this session is for you! Co-hosted by Penny from Lingo Mama with special guest, Greek speaker and local Melbournian Sophia Ioannidis. For tickets, visit https://bit.ly/2CLCiBG

MELBOURNE INTERNATIONAL COMEDY FESTIVAL
The Melbourne International Comedy Festival is on now until 21 April with hilarious shows taking place across the city. Among the comedians are a number of Greek origin, including locals George Dimarelos and Charisa Bossinakis, as well as the UK’s George Zacharopoulos. This year’s line-up also includes the Festival’s first ever Greek-language stand-up show direct from Greece: Lambros Fisfis & Michalis Mathioudakis with ‘Σταντ Απ Κόμεντι ιν Γκρίκ’. To see the full guide and to purchase tickets, visit comedyfestival.com.au

‘MURIEL’S WEDDING THE MUSICAL’
A new season of ‘Muriel’s Wedding The Musical’ has kicked off, with Greek Australian Stefanie Jones in the role of Rhonda. Stuck in a dead-end life in Porpoise Spit, Muriel dreams of the perfect wedding – the dress, the church, the attention. Unfortunately, there’s one thing missing: a groom. Following her dreams to Sydney, Muriel ends up with everything she ever wanted; that’s when things start to go really wrong. With music by Kate Miller-Heidke and Keir Nuttall, the musical features an incredible soundtrack of addictive new songs plus your favourite ABBA hits. Directed by Simon Phillips. On now at Her Majesty’s Theatre (219 Exhibition St, Melbourne) until 16 June. To book, visit https://murielsweddingthemusical.com/

MARIOS & PASCAL AT OPEN STUDIO
Master of the santouri Marios Papadeas is heading back to Australia following a successful set of shows last year. Joining him is Pascal Latra on vocals and guitar with multi-instrumentalists Byron Triandafilides and Paddy Montgomery. Together they will perform rembetika and smyrneika on Tuesday 16 April at Open Studio (204 High St, Northcote) from 8.30-11.30 pm. Tickets $15.00 at the door.

ROMIOSINI & BEYOND
The Greek Community of Melbourne is hosting a performance of Mikis Theodorakis’ classic anthem of Greek identity and other well-loved works. Featuring international vocalist Dimitris Basis and conducted by George Ellis. The well-loved song cycle, Romiosini is based on the poetry of Yannis Ritsos, and describes the feelings of oppression and suffering in a country under foreign occupation. International artist, Dimitris Basis has a special personal relationship with Theodorakis and it is his request for the GCM to present the masterpiece. Taking place on Friday 17 May from 8.00-10.00 pm at the Melbourne Recital Centre (31 Sturt St, Southbank), this concert champions works previously not performed in Melbourne written by the great maestro. For tickets, visit melbournerecital.com.au

‘TROJAN WOMEN’
Written by Euripides and first produced in 415 BC during the Peloponnesian War, ‘The Trojan Women’ was the third tragedy of a trilogy dealing with the Trojan War. This year, Hellenic Art Theatre and The Greek Festival of Sydney are presenting a version of the Greek tragedy directed by Stavros Economidis. In the ruins of their burning city, Queen Hebuca (Ekavi) and the women of Troy still mourning the slaughter of their husbands and sons, await enslavement and exile. One of the greatest of all anti-war plays, it is a timeless mediation on the moments of individual choice that separate death and life, despair and hope, past and future. Catch the play in its final weekend on Saturday 6 and Sunday 7 April. Performed in Greek with English surtitles at 142 Addison Rd, Marrickville. To book tickets, visit hellenicarttheatre.com.au/

PYX LAX BY IHO NYX
As part of the Greek Festival of Sydney program, Sydney band Iho Nyx will pay tribute to one of Greece’s most successful groups, Pyx Lax this Sunday 7 April at Factory Theatre (105 Victoria Rd, Marrickville). They will perform hits by the beloved Greek rock band from the 1990’s from 7.00 pm. Tickets $30.00 (plus booking fee). To book, call (02) 9550 3666 or visit factorytheatre.com.au

SYDNEY GREEK JAM
A special edition of Sydney Greek Jam will be held on Wednesday 10 April from 7.00-11.00 pm at The Pratto (42 Arthur St, Ashfield). A social enterprise run by Metro Assist, it offers training to refugees and migrants in operating the club kitchen and for jobs in catering and hospitality. The Jam will focus on songs of exile, namely smyrneika and rebetika, genres that were born out of hardship and longing for one’s homeland. People of all cultures are welcome to go along and share songs from their homeland. Take along your instrument and your enthusiasm. To book (essential), visit http://tix.yt/08r. In the lead up to the event, links will be posted to selected songs that will be played on the night via https://bit.ly/2JUW5VD

THE BIRTH OF ANCIENT GREEK THEATRE
In this stage performance, we follow the history of ancient Greek drama from its birth in religious ceremonies and traditional popular theatre to the four greatest dramatists of the fifth century BCE, the tragedians Aeschylus, Sophocles, and Euripides and the comic playwright Aristophanes. Extracts will be performed from a selection of plays which remain relevant in our own day, dealing with issues such as war and its consequences, and the inhumanity of those who wield absolute power. Note: This production is in Greek. On at the Hellenic Art Theatre (36/142 Addison Rd, Marrickville) from 12-14 April. For tickets, visit https://bit.ly/2COtF9B

‘”SORRY” WRONG BED’
Mytilenian House (225 Canterbury Road, Canterbury) is hosting a hilarious Greek play intriguingly titled ‘”Sorry”, Wrong Bed’. It sees a couple pull up to a mysterious looking motel to rest after an exhausting drive. At this motel, nothing seems to work as it should and even the hotel’s manager has an eerie air about him. Frustration and exhaustion lead the couple into an all out fight. The presence of an eccentric maid further adds to the tensions whilst the arrival of another couple unleashes a strange chain of events with unexpected outcomes. What secrets are held behind the walls of this hotel and its strange occupants? On show now until 14 April. For tickets, visit https://bit.ly/2Vc4dC8

THE MARIOS PAPADEAS ENSEMBLE
Following his show in Melbourne, master santouri player Marios Papadeas is heading to the country’s capital to enchant audiences with his spellbinding melodies, woven effortlessly with finesse. He will be joined by vocalist Pascal Latra and the multitalented Byron Triandafilides and Paddy Montgomery at the National Folk Festival in Canberra from 18-22 April. For tickets, visit https://www.folkfestival.org.au/tickets/