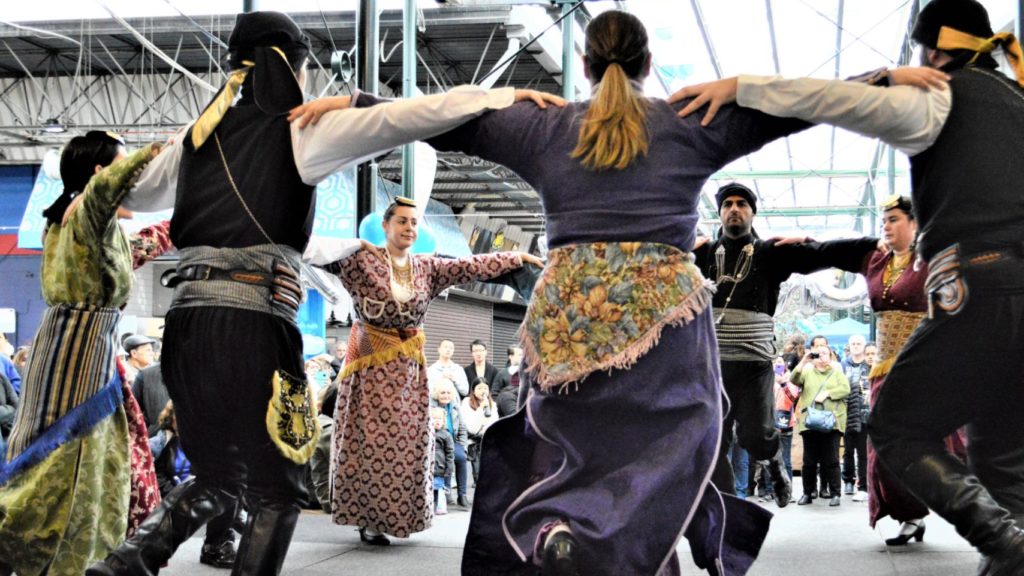 PRESTON MARKET’S BIG FAT GREEK DAY III
This weekend, Preston Market’s Big Fat Greek Day returns! There won’t be plate smashing but there will be plenty of dancing, music, family-fun activities and most importantly delicious food! On Sunday 14 April from 10.00 am-3.00 pm, take along your family and friends and immerse yourself in a cultural experience. Entertainment includes performances by the Manasis School Of Greek Dance & Culture, pop-up food stalls and lots of free activities such as workshops, an animal farm and a photo-booth. Keep an eye out for the stilt walking Greek Goddess Angels and the Easter Bunny who will be handing out Easter eggs and photo opportunities on the day. For more info, visit http://www.prestonmarket.com.au/big-fat-greek-day-iii/

MELBOURNE INTERNATIONAL COMEDY FESTIVAL
The Melbourne International Comedy Festival is now underway until 21 April. Hilarious shows are taking place across the city, including a number of comedians of Greek origin such as locals George Dimarelos and Charisa Bossinakis, the UK’s George Zacharopoulos, along with the festival’s first ever Greek-language stand-up show direct from Greece titled ‘Σταντ Απ Κόμεντι ιν Γκρίκ’ by Lambros Fisfis and Michalis Mathioudakis. To see the full guide and purchase tickets, visit comedyfestival.com.au

‘MURIEL’S WEDDING THE MUSICAL’
A new season of ‘Muriel’s Wedding The Musical’ has kicked off, with Greek Australian Stefanie Jones in the role of Rhonda, Muriel’s best friend. The musical, based on the cult 90’s film, sees Muriel stuck in a dead-end life in Porpoise Spit, where she dreams of the perfect wedding. Unfortunately, there’s one thing missing: a groom. Following her dreams to Sydney, Muriel ends up with everything she ever wanted; that’s when things start to go really wrong. With music by Kate Miller-Heidke and Keir Nuttall, the musical features an incredible soundtrack of addictive new songs, plus your favourite ABBA hits. Directed by Simon Phillips. On now until 16 June at Her Majesty’s Theatre (219 Exhibition St, Melbourne). To book, visit https://murielsweddingthemusical.com/

MARIOS PAPADEAS & PASCAL LATRA
Greece’s master of the santouri, Marios Papadeas is heading back to Australia following a successful set of shows in 2018. Joining him is Pascal Latra on vocals and guitar, with multi-instrumentalists Byron Triandafilides and Paddy Montgomery. Together they will perform rembetika and smyrneika on Tuesday 16 April at Open Studio (204 High St, Northcote) from 8.30-11.30 pm. Tickets $15.00 at the door.

OOOPAAA GREEK NIGHT
Dimples (100 Fletcher St, Essendon) is hosting a Greek night on Saturday 20 April from 9.00 pm-3.00 am. DJ Missailidis will be spinning all your favourite modern and traditional Greek hits.

COMEDY THEATRE: ‘MAS PIASANE’
‘Mas Piasane’, a production by Greek Stage Theatre, is making its way to Melbourne from Sydney this month for one weekend. The hilarious stage show sees Zikos take part as an extra in a movie representing a policeman. He goes to the police station to get a new ID issued. Still wearing his prop police uniform, he is intercepted by the real police officers who are under the impression that he is a highly reputable police officer in the force. As time goes on, things get more complicated when a notorious terrorist comes in for a misdemeanour and no one recognises who he is. Performed in Greek with English surtitles. Catch ‘Mas Piasane’ at Clayton Community Centre (9-15 Cooke St, Clayton) on 20 April at 6.30 pm and 21 April at 5.30 pm. For enquiries and tickets, call 0450 724 600 or visit www.bit.ly/greekstagem

LIVE GREEK MUSIC NIGHT
On Sunday 21 April Mediterranean Greek Tavern (511 Glen Huntly Rd, Elsternwick) is hosting another one of their live Greek music nights. Enjoy the long weekend with great music, food and drinks. On from 7.00-10.00 pm. For bookings, call (03) 9530 0396.

‘PITTSBURGH’
Highly-acclaimed Greek play ‘Pittsburgh’ is heading to Australia next month. Written by Soti Traintafyllou and directed by Arkadia Psalti, it is the year 1913 in Chios, when the island is experiencing poverty, hunger, refugees, and sickness. Yet the telephone and the cinema have already arrived, creating links to a wider world. The first great wave of emigration to America has begun. Elengo has received the first letter from her husband Demosthenes, who is in Pittsburgh. A whole world in crisis, a whole world is trying to find the way forward. This is the story of a love that struggles to come to flower. See the play at The Greek Centre (168 Lonsdale St, Melbourne) between 3-5 May. For tickets, visit https://bit.ly/2G8o93C

ROMIOSINI & BEYOND
The Greek Community of Melbourne (GCM) is hosting a performance of Mikis Theodorakis’ classic anthem of Greek identity and other well-loved works. Featuring international vocalist Dimitris Basis and conducted by George Ellis. The well-loved song cycle, Romiosini is based on the poetry of Yannis Ritsos, and describes the feelings of oppression and suffering in a country under foreign occupation. Basis has a special personal relationship with Theodorakis and it is his request for the GCM to present the masterpiece. Taking place on Friday 17 May from 8.00-10.00 pm at the Melbourne Recital Centre (31 Sturt St, Southbank), this concert champions works previously not performed in Melbourne written by the great maestro. For tickets, visit melbournerecital.com.au

‘”SORRY” WRONG BED’
Mytilenian House (225 Canterbury Road, Canterbury) is hosting the hilarious Greek play ‘”Sorry”, Wrong Bed’ for one more weekend. A couple pull up to a mysterious looking motel to rest after an exhausting drive. At this motel, nothing seems to work as it should and even the hotel’s manager has an eerie air about him. Frustration and exhaustion lead the couple into an all out fight. The presence of an eccentric maid further adds to the tensions whilst the arrival of another couple unleashes a strange chain of events with unexpected outcomes. What secrets are held behind the walls of this hotel and its strange occupants? On show now until 14 April. For tickets, visit https://www.trybooking.com/book/sessions?eid=456972

MARIOS PAPADEAS & PASCHAL LATRA
Following on from their performance in Melbourne, Marios Papadeas and Paschal Latra are heading to South Australia, where they will present a journey of songs from Asia Minor and the diaspora in the 1930’s. Catch them on Wednesday 17 April at Marion Cultural Centre (287 Diagonal Rd, Oaklands Park) at 8.00 pm. Tickets $35.00. To book, call 0417 844 140 or 0407 894 623, or visit Spartan Electrical (140 Henley Bch Rd, Torrensville).

THE MARIOS PAPADEAS ENSEMBLE
Following his appearance in Melbourne and Adelaide, Marios Papadeas is heading to Canberra to enchant audiences with his spellbinding melodies, woven effortlessly with such finesse at the National Folk Festival. He will be joined by vocalist Pascal Latra and the multi-talented Byron Triandafilides and Paddy Montgomery for three performances and two workshops from 18-22 April. For tickets, visit https://www.folkfestival.org.au/tickets/