Alkinos Tsilimidos’ black comedy, ‘The Taverna’ will have its world premiere in Sydney and Melbourne this Sunday 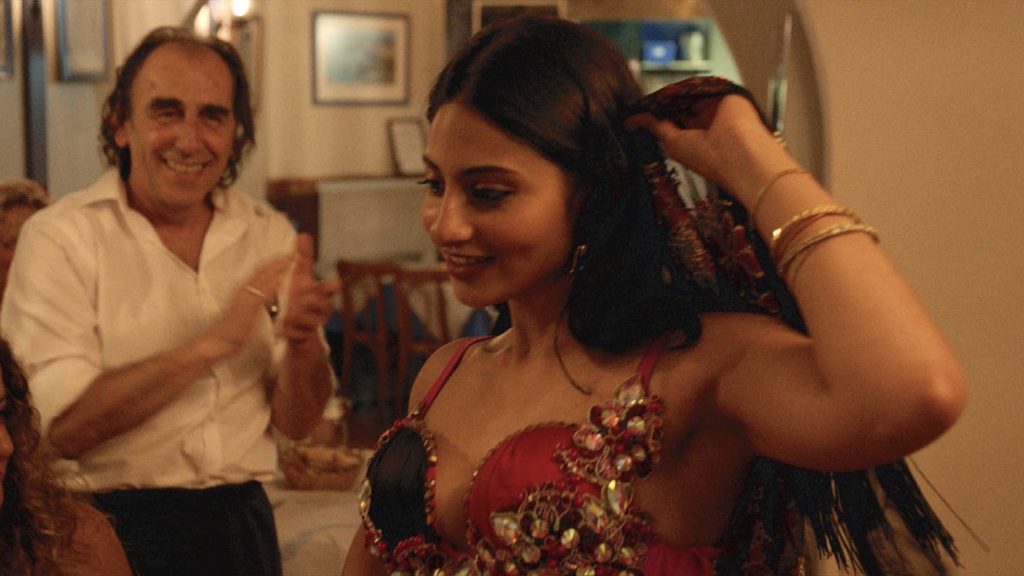 Step one, take a moment to bring to mind your most eventful outing in a Greek taverna. A night where you probably had a few…more drinks than usual. Next, allow your imagination to run wild adding an injection of surrealism to this memory and a farcical scene or two. Congratulations, you are now mentally prepared for attending the closing night of the 26th Delphi Bank Greek Film Festival.

Coming to the big screen this Sunday, is Alkinos Tsilimidos’ world premiere of The Taverna, a black comedy set to round up the festival in Melbourne and Sydney on a lighter note.

Filmed in an actual taverna in Melbourne’s east, over 16 days, the movie chronicles a chaotic night in which an impromptu belly dance at a Greek restaurant leads to a series of unexpected and hilarious mishaps.

As the director admits, this is probably his most personal film in his career so far.

“The Taverna will mean different things to different people.[…]From my earliest recollections the experience of eating in Greek restaurants in Melbourne made me feel Greek. The food, the drama, the language, and the fun led to an overwhelming feeling of belonging. This is what The Taverna means to me, that we can be who we are when gifted a place to belong.”

Considered amongst Australia’s most important contemporary film directors, most of Tsilimidos’ work has received awards and international accolades.

And while renowned for showcasing stories of social relevance, this time his much awaited comeback in cinema enters the comedy terrain.

Speaking to Neos Kosmos, Alkinos Tsilimidos describes the night when he first thought of creating the movie. Disclaimer: this is not a joke, the idea for The Taverna was born in his friend Kosta’s restaurant, the actual location where shooting took place!

“Actually sitting at the back of White Village Tavern after a meal, having some drinks and chatting to Kosta, the owner of that tavern, it just dawned on me that everything I want to say about the world in this particular moment in a small nutshell could be told inside one of my favourite things to do, and that’s to go to a Greek tavern and eat.

“And then I thought to myself ‘well actually, I don’t want to leave the tavern. Why don’t we have an experience that takes place in real time?’ So that’s sort of really where it began. […]it was a mad idea but it just didn’t leave me so I think within a day or two I started writing.”

White Village Tavern has always been the director’s wrap party go-to destination for his productions.

“So what did the owner, think of the movie?” I couldn’t help asking during the interview, expressing my thought out loud that if I were in Kosta’s place and a film had been shot at my restaurant, I wouldn’t leave the director in peace, until shown the final result.

“He hasn’t seen it,” Tsilimidos replies, “And I’ll tell you why, because he has a restaurant to run and that’s the most important thing!” he says, hinting at what we will see on the big screen.

Indeed, The Taverna’s comic mosaic is comprised of things one would find difficult to handle separately let alone all together during a busy night at work: a belly dancer refusing to perform for different reasons including a restraining order interfering with her final dance, a crazy waitress making an unusual offer, a well-intentioned chef hatching an odd plan, a male customer’s inappropriate gesture towards a female, police involvement and… many more within an atmosphere of chaos, redemption and of course hilarious scenes.

As with everything in life, the comic meets the dramatic for every character, with the ‘spine’ of the plot focused on the internal struggle faced by people who need a change in their life to escape the cause of their unhappiness.

He points to the different scenes. “Some moments in the film are quite dramatic, but the intention of the film was always to be playful, for the audience to engage with these characters, laugh with them and also realise the serious side of it,” he says.

“The intention was always fun for this film. That’s where its heart is. People to come and have a good time, have a bit of a laugh, even a cry, and maybe go to Kosta’s for food after!”

The restaurant owner’s character is central in the movie, a role played by Greek Australian actor Vangelis Mourikis.

Mourikis, who started his career Down Under and upon returning to Greece devoted his talent to independent cinema, counting more than sixty film appearances and numerous accolades, was purposefully chosen for the role.

In fact, as Tsilimidos explains, part of the idea for doing the movie in the first place, was bringing Mourikis to play a major role and “push him out to a broader international audience”.

“What I’ve seen in Vangeli is a rarity, he embodies something really unique that is also very Greek, sort of hard to say exactly what it is, but he possesses a humanity and a humour that I knew and that’s why I wrote the role for this character[…]The character is more of a composite of tavern owners Vangeli and I know, and we put them together.

“The big thing for us was to do something a bit more playful and more fun, because Vangeli has been doing kind of really heavy roles and I’ve been making kind of social realism movies, so I thought I’m kind of bored with that, let’s make something fun.”

This is Tsilimidos’ first movie referencing his Greek heritage, through two of the characters, Kostas the restaurant owner and Emmanuela, an Australian Greek waitress.

“But The Taverna is not really about being Greek,” says the director.

“All of the characters in the film except one are basically immigrants and I think this is what Australia is, so I don’t think it is about Greekness but a deeper look into what Australia is for me.”

As to why his film was chosen for the GFF’s closing night, Tsilimidos answers: “This is for the festival organisers to decide so I can’t know. But for me, I think it’s a way of bringing it back to Australia and the Greeks that exist in Australia. I think it’s a nice way to round off the festival in a lighter way, and in this sense a pretty good choice on their behalf. It’s always good to end the festival with a note that reinvents the culture and almost pins it down to the reality of the audience members.”

*The Taverna is showing at the official closing night celebrations in Melbourne and Sydney on Sunday 20 October from 6.30 pm onward.
For tickets visit https://greekfilmfestival.com.au/

To win your way to the special final screening for the Delphi Bank 26th Greek Film Festival visit https://www.delphibank.com.au/gff