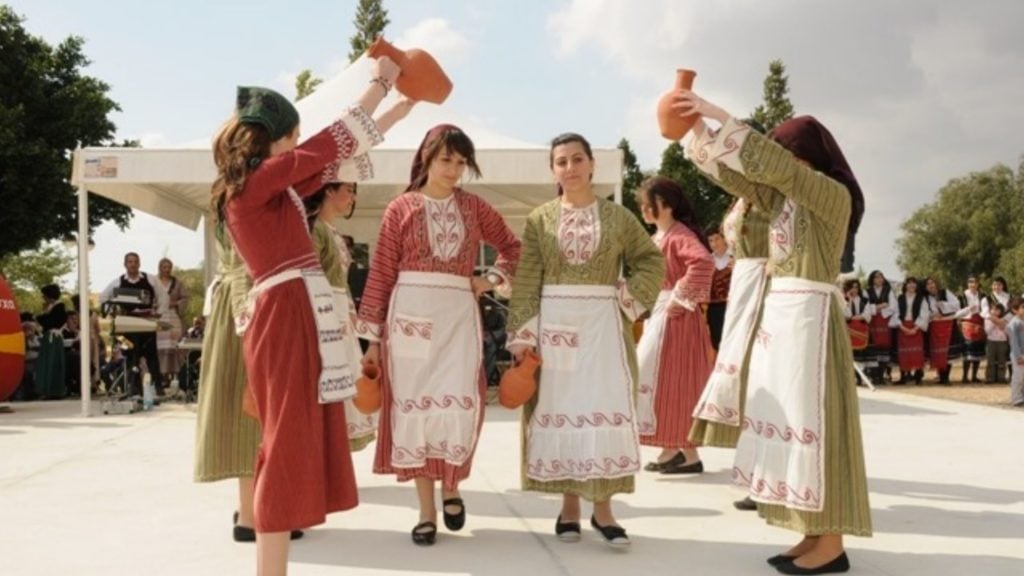 The Greek Cypriot Community of St Andreas is celebrating the feast day of its patron saint with a special liturgy, followed by its annual paniyiri. Go along and enjoy live music and dance performances, and indulge in delicious Cypriot dishes including koupes, shamishi, seftalies, souvlakia, mahalepi and more!

Uriel’s Workshop founded by Eirene Stamatogiannis has organised Rejoice, an iconography exhibition showing at the Darebin Arts Centre next month. It will feature egg tempera works by some of the best master iconographers Melbourne has to offer, alongside master water gilders, wood carvers and jewellers. Traditional icons will be on show, alongside Byzantine-inspired artworks, matted prints and limited edition prints. The exhibition uncovers hidden talents and supports the resurgence of iconography.

The Lemnian Community of Victoria is hosting a fun Christmas Family Day next month. There will be plenty of entertainment for the whole family including an animal pet farm, face painting, balloon twisting and pony rides! There is free entry for all, with food and drinks sold separately. Children up to the age of 12 are eligible to receive a gift on the day. To register their name, contact Penny on 0419 363 803 by 8 December.

AIMS & PANARCADIAN SYMPOSIUM/DINNER
The Australian Institute of Macedonian Studies (AIMS) and the
Panarcadian Association of Melbourne and Victoria are hosting
a symposium/dinner honouring work of Panagiotis Liveriadis.
When: Friday 29 November at 7.00 pm
Where: 570 Victoria St, North Melbourne

ALPHA OMEGA 3 YEAR ANNIVERSARY
Alpha and Omega Greek Community of Melbourne and
Victoria have organised a Pontian night for its 3rd year
anniversary.
When: Friday 29 November from 6.30 pm-12.30 am
Where: Rigani (251 Sprint St, Reservoir)

MAVS ZORBA NIGHT
Milton and Julia’s beloved Zorba Night is back for November!
When: Saturday 30 November at 6.00-11.00 pm
Where: Mav’s Restaurant (73b Little Malop St, Geelong)

MS FRANKIE TURNS GREEK
The owners of this Italian restaurant celebrate the Greek half
of their heritage for one night only, with a Greek feast.
When: Sunday 1 December at 5.00-10.00 pm
Where: 24 Cremorne St, Cremorne

ANTI-REPRESSION ASSEMBLY FUNDRAISER
In solidarity with the Anti-Repression Assembly fighting corporate
and state violence in Exarchia and across Athens, with artists including
Koraly Dimitriadis and The Bandidas.
When: Thursday 5 December at 8.00 pm-12.30 am
Where: Cafe Gummo (711 High St, Thornbury)

GREEK COOKING CLASS
Kelly from The Hellenic Odyssey will teach you how to create a generous
spread of food and about the Mediterranean diet, its origins and its benefits.
When: Saturday 7 December
Where: Two Kings Cafe (353 Centre Rd, Bentleigh)

CYPRIOT SMURF
Comedian Cypriot Smurf aka Souvlakis will be in Melbourne
for one show only next month.
When: Sunday 15 December at 3.00 pm
Where: Cyprus Community Centre (495 Lygon St, East Brunswick)

A MAGICAL CHRISTMAS THE MUSICAL
Rallis School of Greek Dance brings to life A Magical Christmas on the stage.
The dance floor will be open afterwards to dance the night away.
When: Friday 6 December at 7.30-11.30 pm
Where: Canterbury-Hurlstone Park RSL Club
(20-26 Canterbury Rd, Hurlstone Park)

TROY: FACT OR FICTION?
A lecture by Dr Jennifer Lawless for the series Travellers in Time.
When: Saturday 7 December at 2.00-3.00 pm
Where: Philosophy Room S249, University of Sydney,
The Quadrangle, Camperdown

CYPRIOT SMURF
Comedian Cypriot Smurf aka Souvlakis will be in Sydney
for one show only next month.
When: Saturday 21 December at 7.00-11.00 pm
Where: Cyprus Community Club of NSW (58-76 Stanmore Rd, Stanmore)

DELPHI BANK 26TH GREEK FILM FESTIVAL
The Delphi Bank Greek Film Festival (GFF) is heading to Canberra
this week, its final destination for 2019. Now on for the 26th year,
organisers have curated an exciting program that showcases the best
of Greek cinema, including feature films, and documentaries. Not to be missed!
When: 29 November-1 December

If you have an event you would like to promote and have it considered for our listing, please contact eleni@neoskosmos.com.au