The Evzones Collection: The daily life of Evzones through a lens “The photos you see are from the heart. They were not taken with a report in mind. It was my pride in being Greek, my passion, that led me to take these pictures of the Evzones,” said the renowned expatriate photographer, Nick Bourdaniotis, during the presentation of the exhibition of The Evzones Collection.

The exhibition is taking place as part of the events of the National Committee for the 200th anniversary of the Revolution of 1821, under the auspices of Archbishop Makarios.

The collection of photographs are the result of six years of tireless effort made by Mr Bourdaniotis, in Australia and Greece.

READ MORE: Evzones make history standing guard at the Epitaph in Adelaide for the first time!

Nick, as he is better known, managed to secure accreditation so that he could have “behind the scenes” access and in his own way, was able to capture the daily lives of the Evzones through his lens. Now he shares his favorite photos with all of us.

The media presentation of the exhibition took place on Thursday, at St Spyridon Sydney, while its official opening will take place today in Canberra at the Hellenic Club.

The exhibition will run across across Australia on the following dates: 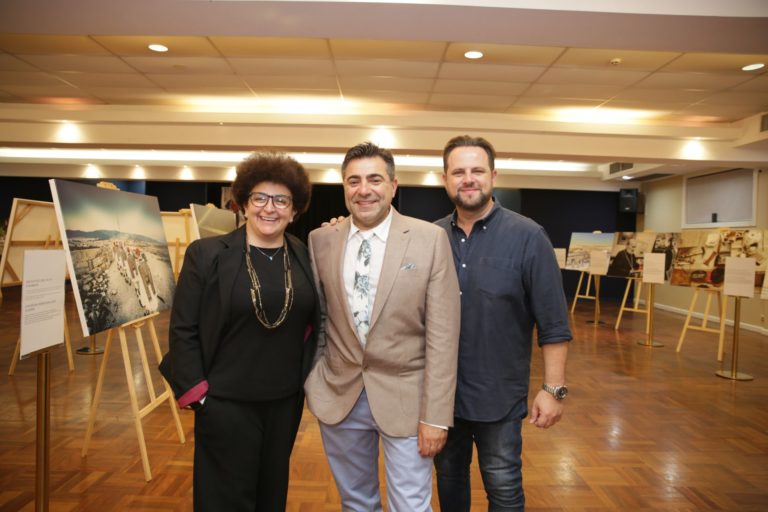 Nick Bourdaniotis was born in Nambour, Queensland. He lived in Brisbane until 2001 before moving to Sydney. His passion for photography started at a young age and he is now a renowned photographer (Bourdo Photography) with many collaborations under his belt. With his own artistic approach he freezes moments, emotions, experiences and memories in time.

The Evzones always enchanted him. “I have a passion for photography. Also, a passion for my Greek origin…it’s the feeling you have when you step on the ground at the airport of Athens or when you arrive in the village of your ancestors. I decided to combine them, depicting Greece in a unique way,” he said.

In fact, in 2017, 2018 and 2019, he was invited by the Presidential Guard and with special permission he had the opportunity to capture the Evzones during the raising of the flag at the Acropolis, inside the guard camp, during their day-to-day, whilst also having special access during their parades every Sunday morning in the center of Athens.

Also, as director of photography for the Greek City Times, he photographed the visit of the Evzones to Melbourne, Adelaide and Sydney in 2018 and 2019.

In 2018, the Presidential Guard asked to publish his photos in the book published for its 150 years of history. In addition, photographs taken on the Acropolis with the Evzones were selected to be exhibited at the Acropolis Museum.

In future he hopes to photograph the Evzones in the USA and other parts of Greece.

In 2021 Mr Bourdaniotis published his first book full of photographs taken in Greece and Australia, which is available at: www.greece2021.com.au/evzones.

You can also write e-mail Mr Bourdaniotis at nickbourdo@gmail.com or speak directly to him at 0411 983 093. Nick with his wife Erenie and their children, Billy and Krissy Photo: Supplied by George Karantonis The Evzones Collection by Nick Bourdaniotis Photo: Supplied by by George Karantonis