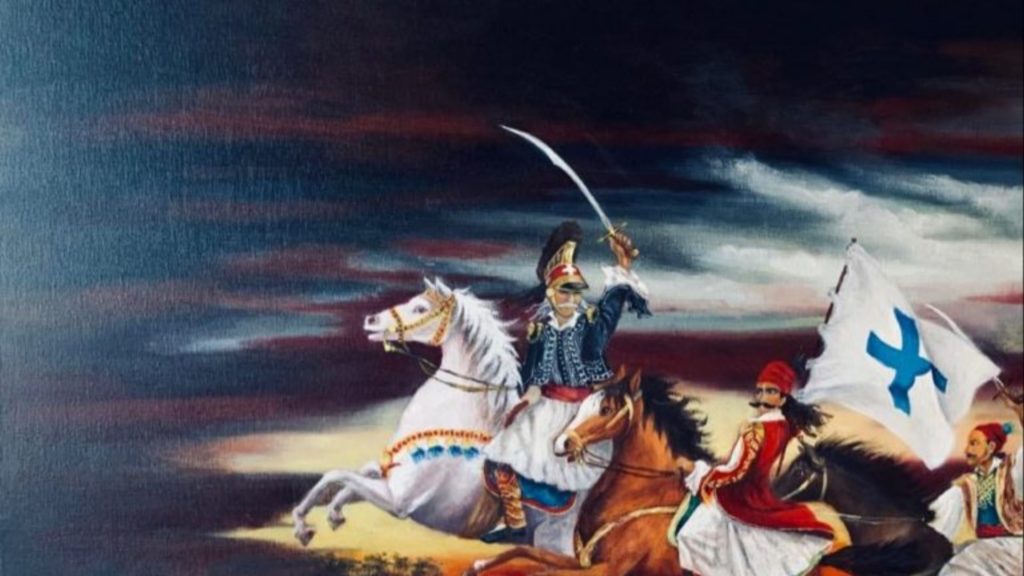 CLASS: CELEBRATING 200 YEARS – MODERN GREEK HISTORY
Greece celebrates 200 years since the struggle for independence to free her from Ottoman rule, began. The struggle for independence and democracy has been tumultuous and bloodied, and arguably at times she has enjoyed surprisingly little of either. This class will be delivered face-to-face at WEA Sydney. Enrolling students need to ensure they have read the current COVID-19 Safety Guidance that WEA Sydney has put in place before enrolling.
When: 13 March, 10:00am
Where: WEA Sydney, 72 Bathurst Street, Sydney, NSW, 2000
Bookings & Info: WEA Sydney website

GEORGE DOUKAS & THE D-STRINGS
George Doukas is back at Camelot Lounge with his band The D Strings for another night of musical mayhem. The D Strings is a ten piece ensemble which combines the velvet sound of the string quartet with the edgy tones of bouzouki and baglama. They perform a mix of original music, traditional Greek, Rembetika and even a taste of Gypsy Jazz (Greek style).
When: 14 March, 6:00pm
Where: Camelot Lounge, Cnr 103 Railway Pde & 19 Marrickville Rd, Marrickville, NSW, 2204
Bookings & Info: StickyTickets.com

RIGAS AND REVOLUTION
Alfred Vincent presents a talk along with a performance of Rigas’ songs by Eleni Elefterias Kostakidis and John Coombs, and readings by Christine Kanellakis. Rigas Velestinlis or Pheraios (1757-1798) is known especially for his War Song (Thourios), which inspired countless Greeks in their struggles for liberation from the Ottoman Empire, sacrificing their lives, if necessary, after his example. In other writings Rigas aimed to raise awareness of the ancient Greek legacy, and to help promote a modern, educated society. In his New Political Administrationhe proposed a constitution for a democratic Hellenic Republic embracing all the peoples of southeastern Europe. He explores how should we interpret this idea and its interpretation in modern times.
When: 18 March, 7:00pm
Where: Prince Henry Centre, 2 Coast Hospital Road, Little Bay, NSW, 2036
Bookings & Info: Eventbrite

GREEK LEGENDS TRIBUTE
Celebrating 200 years of Greek Independence, the cream of Greek/Australian singers, dancers and musicians are coming together to pay tribute to the Greek musical icons of the past hundred years. The music of Mikis Theodorakis, Marinella, Kazandzidis, Dalaras, Alexiou and more are bought to life in a concert of epic proportions. The concert also pays homage to international artists, Vangelis, Nanna Mouskouri, Demis Roussos and the inimitable Maria Callas. Penny Pavlakis is joined by a 20 piece orchestra and an eight bouzouki spectacular. Also joining her will be Giorgios Malliaros, Carly Yelayiotis, Jemilly Pavlakis-Kalil and other guests.
When: 26 March, 8:00pm
Where: Enmore Theatre, 118-132 Enmore Rd, Newtown, NSW, 2042
Bookings & Info: Tickets start at $69 via Ticketek

FASHIONS BY NIGHT DINNER DANCE
The Greek Young Matrons Association are hosting a dinner dance in aid of the Sydney Children’s Hospital. Join them for a fun night of Fashion by Catherine Colubriale Couture, Jewellery by Levendi, dinner and dancing.
When: 26 March, 6:30pm
Where: Doltone House, 48 Pirrama Road, Pyrmont, NSW, 2009
Bookings: $175pp, via TryBooking
Info: Visit the association’s website

1821 EXHIBITION BY ANGELA KIKI KONSTANTINOPOULOU
The series called 1821 is dedicated to the renowned as well as the unknown heroes of the Greek War of Independence in 1821. It consists of 16 oil paintings on canvas celebrating the Bicentennial Anniversary of the war of Greece for its independence against the Ottoman Empire. Angela Kiki was inspired on the Heroism of the Greeks which led to the  Historical Events that occurred during the in 1821 liberation of Greece from the Ottoman Empire
When: 20 – 21 March
Where: Hellenic Club of Canberra, Matilda Street, Woden, Canberra, ACT, 2606
Info: Hellenic Club website

HELLENIC FESTIVAL: STREET FOOD OF THE WORLD
2021 is a highly symbolic year for Greece, as it marks the 200th anniversary of the outbreak of the country’s independence war against the Ottoman rule in 1821. As part of the commemorations for the anniversary, the Hellenic Club of Canberra, in partnership with the Greek Community of Canberra and Fair Canberra Inc, a festival to the Hellenic Club Woden. The festival will feature traditional street food, music and dance from a wide range of cultures. It will also include a number of other events within the Club, including a commemorative art exhibition by Greek Australian artist, Angela Kiki Konstantinopoulou, titled 1821, a traditional Greek Taverna Night at Fillos Taverna + Bar and a range of free lectures.
When: 20 – 21 March
Where: Hellenic Club of Canberra, Matilda Street, Woden, Canberra, ACT, 2606
Info: Hellenic Club website

APOKRIES COCKTAIL PARTY
The Cretan Brotherhood Youth will be holding their first event of 2021, an Apokries Cocktail Event! All ages are welcome and eventgoers are encouraged to wear colourful attire and creative get-ups. There are prizes to be won, so make sure to come along and expect an amazing night full of dancing and fun, whilst you are served a selection of finger foods and drinks.
When: 12 March, 7:30pm
Where: 148-150 Nicholson St, Brunswick East, VIC, 3057
Tickets: Via Venuedoor website
Info: Facebook event page

HOMER’S ILIAD: THIE SIEGE OF TROY
The Stork Theatre presents an 8-hour Homeric marathon in a first for Australia through its presentation of ‘Homer’s Iliad: The Siege of Troy” at Fairfield Theatre on 14 March. The performance reading from a 15,000-line text recited by 10 starring performers, accompanied by three Japanese drummers for eight hours of gods, heroes and lovers of classical Greece. The Stork Theatre aims to enthral Australian audiences just as ancient audiences were enthralled when the epic poem was first chanted on the Greek hillsides 2,700 years ago.
When: 14 March, 11:00am-7:00pm, 3 Sessions
Where: Fairfield Amphitheatre
Bookings & Info: Prices start at $25 for a single session, visit the Stork Theatre website

O@KLEIGH GREEK DANCE ACADEMY LAUNCH
A fun evening for all as we launch an initiative that will benefit members of our St Anargiri Greek Language community and beyond. Dance lessons will be at no cost for all St Anargiri GLC students and Oakleigh Grammar students. Affordable fees will apply for external participants. There will be activities for children and light refreshments.
When: 18 March, 6:30pm
Where: Community Conference and Function Centre, 77/81 Willesden Rd, Oakleigh, VIC, 3166
Info: Email info@stsanargiriglc.vic.edu.au

COMMEMMORATING 200 YEARS OF INDEPENDENCE
As with other years the Hellenic RSL will hold a special Commemoration on the actual day, Thursday 25th March, beginning at Agios Eustathios at 9:30am, followed by a wreath laying ceremony at the Australian Hellenic Memorial at 12:00pm and wreath laying at the Melbourne Shrine of Remembrance at 1:00pm. It is expected that a large number of Greek and Australian organisations will participate in the wreath laying ceremonies.
When: 25 March, 2021
Where: Australian Hellenic Memorial & Shrine of Remembrance

FROM REVOLT, TO REVOLUTION: THE CREATION OF THE KINGDOM OF GREECE
Join Dr Con Allimonos at the Hellenic Museum for a series of illuminating lectures on the events leading up to, during and after the Greek War of Independence. The first in the Revolt & Revloution Lecture series outlines the events, prompted by the ‘Revolution of 1821′, that led to the creation of the Kingdom of Greece in 1830.  It examines the factors that led to Greek armed opposition against the Ottoman presence in the Greek peninsula and explores the various triggers for the ‘1821’ revolt.
When: 27 March, 11:00am
Where: Hellenic Museum, 280 William St, 280 William St, Melbourne, VIC, 3000
Bookings & Info: Hellenic Museum website

REBETIKA TUESDAYS AT SEAGULLS FRANKSTON
In a COVID-safe environment Rebetika returns at Seagulls Greek Taverna – every Tuesday night. Bookings are absolutely essential. You can look forward to hearing music from the early 1920’s to 1940’s, acoustic and intimate. Limited seating so booking ahead is essential.
When: Every Tuesday, 6:00pm
Where: Seagulls Greek Taverna, 491 Nepean Highway, Frankston, VIC, 3199
Bookings: Call (03) 9783 7555
Info: Visit the Facebook event page

WEDNESDAY REBETIKA AT TRIAKOSIA
Wednesday live Rebetika have returned to Triakosia, with Wayne Simmons and Con Kalamaras playing a unique repertoire of pre and post-war music live at the restaurant in Clifton Hill. Bookings are a must as places will fill up quick.
When: Every Wednesday, 7:00pm
Where: Triakosia Athenian Bar & Grill, 300 Queens Prd, Clifton Hill, VIC, 3068
Bookings: Call (03) 9482 4931
Info: Visit the Facebook event page

1821-2021 BICENTENNIAL GREEK INDEPENDENCE
On the 28th of March 2021, the Greek Community of Tasmania in association with the Greek Orthodox Archdiocese of Australia will be commemorating 200 years of Hellenic Independence. Tasmania is proud to be a part of the National Committee for this important landmark and several events celebrating our history and culture are being planned for March 2021.
When: 28 March, 2021
Where: Hellenic House Convention Centre, 69 Federal St, North Hobart, TAS, 7000
Info: Facebook page

THE EVZONES COLLECTION EXHIBITION
This photo exhibition is taking place as part of the events of the National Committee for the 200th anniversary of the Revolution of 1821, under the auspices of Archbishop Makarios. The collection of photographs are the result of six years of tireless effort made by Nick Bourdaniotis, in Australia and Greece documenting the daily lives of the Evzones.
Melbourne: Friday 26 March– Sunday 01 April at Oakleigh Grammar School Hall & Government House of Victoria
Adelaide: Thursday 22 April– Sunday 25 April at The Holy Monastery of St Nectarios
Sydney: TBA  June at Hellenic Club Sydney, Beta / The Grande Level 2
Brisbane: Friday 30 July – Sunday 1 August The Greek Club WestEnd