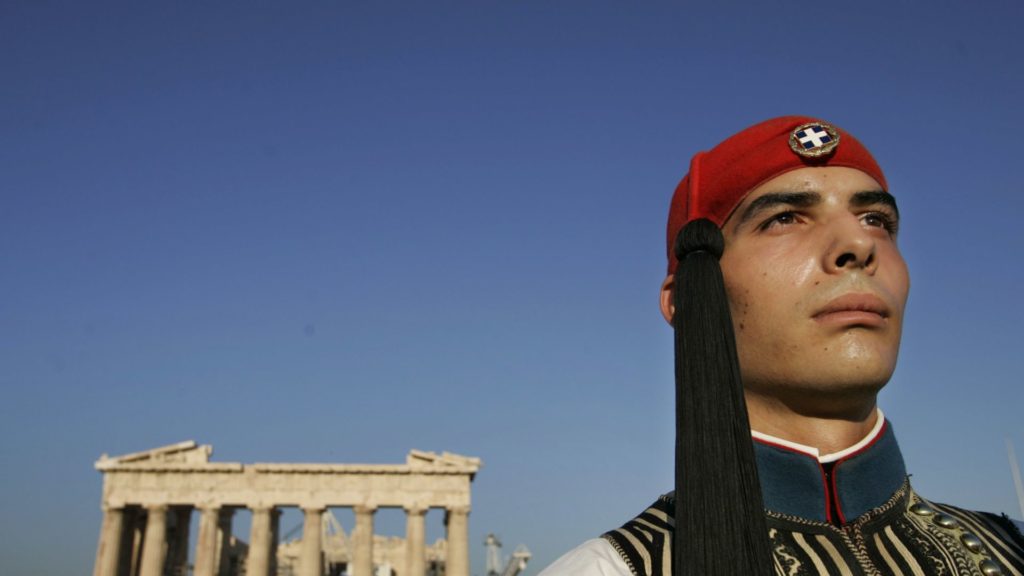 An Evzone, member of the Greek Presidential Guard, backdropped by the ancient Parthenon Photo: AAP via AP Photo/Lefteris Pitarakis

RIGAS AND REVOLUTION
Alfred Vincent presents a talk along with a performance of Rigas’ songs by Eleni Elefterias Kostakidis and John Coombs, and readings by Christine Kanellakis. Rigas Velestinlis or Pheraios (1757-1798) is known especially for his War Song (Thourios), which inspired countless Greeks in their struggles for liberation from the Ottoman Empire, sacrificing their lives, if necessary, after his example. In other writings Rigas aimed to raise awareness of the ancient Greek legacy, and to help promote a modern, educated society. In his New Political Administrationhe proposed a constitution for a democratic Hellenic Republic embracing all the peoples of southeastern Europe. He explores how should we interpret this idea and its interpretation in modern times.
When: 18 March, 7:00pm
Where: Prince Henry Centre, 2 Coast Hospital Road, Little Bay, NSW, 2036
Bookings & Info: Eventbrite

1821 EXHIBITION BY ANGELA KIKI KONSTANTINOPOULOU
The series called 1821 is dedicated to the renowned as well as the unknown heroes of the Greek War of Independence in 1821. It consists of 16 oil paintings on canvas celebrating the Bicentennial Anniversary of the war of Greece for its independence against the Ottoman Empire. Angela Kiki was inspired on the Heroism of the Greeks which led to the  Historical Events that occurred during the in 1821 liberation of Greece from the Ottoman Empire
When: 20 – 21 March
Where: Hellenic Club of Canberra, Matilda Street, Woden, Canberra, ACT, 2606
Info: Hellenic Club website

HELLENIC FESTIVAL: STREET FOOD OF THE WORLD
2021 is a highly symbolic year for Greece, as it marks the 200th anniversary of the outbreak of the country’s independence war against the Ottoman rule in 1821. As part of the commemorations for the anniversary, the Hellenic Club of Canberra, in partnership with the Greek Community of Canberra and Fair Canberra Inc, a festival to the Hellenic Club Woden. The festival will feature traditional street food, music and dance from a wide range of cultures. It will also include a number of other events within the Club, including a commemorative art exhibition by Greek Australian artist, Angela Kiki Konstantinopoulou, titled 1821, a traditional Greek Taverna Night at Fillos Taverna + Bar and a range of free lectures.
When: 20 – 21 March
Where: Hellenic Club of Canberra, Matilda Street, Woden, Canberra, ACT, 2606
Info: Hellenic Club website

COMMEMMORATING 200 YEARS OF INDEPENDENCE
As with other years the Hellenic RSL will hold a special Commemoration on the actual day, Thursday 25th March, beginning at Agios Eustathios at 9:30am, followed by a wreath laying ceremony at the Australian Hellenic Memorial at 12:00pm and wreath laying at the Melbourne Shrine of Remembrance at 1:00pm. It is expected that a large number of Greek and Australian organisations will participate in the wreath laying ceremonies.
When: 25 March, 2021
Where: Australian Hellenic Memorial & Shrine of Remembrance

FROM REVOLT, TO REVOLUTION: THE CREATION OF THE KINGDOM OF GREECE
Join Dr Con Allimonos at the Hellenic Museum for a series of illuminating lectures on the events leading up to, during and after the Greek War of Independence. The first in the Revolt & Revloution Lecture series outlines the events, prompted by the ‘Revolution of 1821′, that led to the creation of the Kingdom of Greece in 1830.  It examines the factors that led to Greek armed opposition against the Ottoman presence in the Greek peninsula and explores the various triggers for the ‘1821’ revolt.
When: 27 March, 11:00am
Where: Hellenic Museum, 280 William St, 280 William St, Melbourne, VIC, 3000
Bookings & Info: Hellenic Museum website

1821-2021 BICENTENNIAL GREEK INDEPENDENCE
On the 28th of March 2021, the Greek Community of Tasmania in association with the Greek Orthodox Archdiocese of Australia will be commemorating 200 years of Hellenic Independence. Tasmania is proud to be a part of the National Committee for this important landmark and several events celebrating our history and culture are being planned for March 2021.
When: 28 March
Where: Hellenic House Convention Centre, 69 Federal St, North Hobart, TAS, 7000
Info: Facebook page

CELEBRATING 200 YEARS OF GREEK REVOLUTION
To acknowledge the 200 years of Greek Revolution the Parliamentary Library of South Australia is hosting a display of items generously provided by the Greek Museum of Adelaide Inc.
When: 22 March – 15 April
Where: South Australian Parliamentary Library
Info: Call Greek Museum of Adelaide President Chrysoula Melissinakis on 0457 456 449

GREECE’S 1821 AS AN INTERNATIONAL EVENT: ITS IMPACT ON AMERICA
Prof Alexander Kitroeff will present a seminar on how the Greek Revolution of 1821 impacted the United States exploring a  paper before offering an overall interpretation of the phenomenon of American Philhellenism in the early 19th century.
When: 25 March, 7:00pm
Where: Online via Zoom and Facebook Live
Info: Visit the Greek Community of Melbourne website

DIRTY PLATE PRESENTS GREECE: THE WOMEN OF THE REVOLUTION
The event will feature poetry, theatre and music by women and non-binary creatives from around the world to commemorate the bicentenary of the Greek revolution and to shout about the feminist revolution taking place in Greece today.
When: 28 March, 7:00pm
Where: Online via Zoom
Bookings: TryBooking.com
Info: Facebook event page

21 THESSALIAN FIGHTERS OF THE REVOLUTION
Join a lesson in Greek history, meeting 21 Thessalian heroes and fighters of the revolutionary years who rose up, some with chariots and others with pens, to liberate their beloved homeland.
When: 4 April, 3:00am
Where: Online via Zoom
Info: Facebook page

THE EVZONES COLLECTION EXHIBITION
This photo exhibition is taking place as part of the events of the National Committee for the 200th anniversary of the Revolution of 1821, under the auspices of Archbishop Makarios. The collection of photographs are the result of six years of tireless effort made by Nick Bourdaniotis, in Australia and Greece documenting the daily lives of the Evzones.
Melbourne: Friday 26 March– Sunday 01 April at Oakleigh Grammar School Hall & Government House of Victoria
Adelaide: Thursday 22 April– Sunday 25 April at The Holy Monastery of St Nectarios
Sydney: TBA  June at Hellenic Club Sydney, Beta / The Grande Level 2
Brisbane: Friday 30 July – Sunday 1 August The Greek Club WestEnd

You can find more events by clicking here: Events galore: Your guide to the 200-year celebration of Greece’s War of Independence