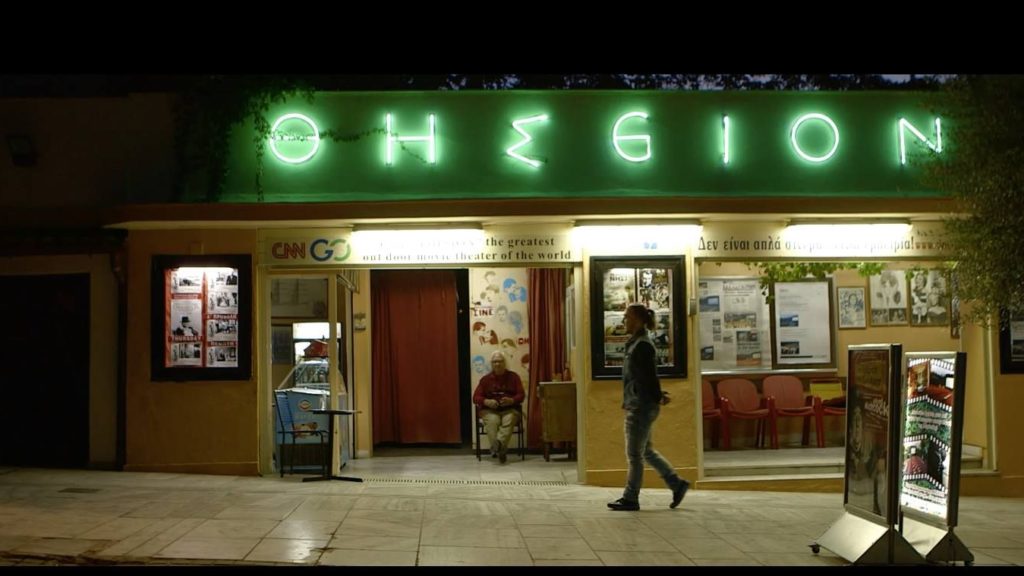 Thission, a vintage place to catch a film, with the Parthenon overhead.

Open-air cinemas are the stuff that childhood memories are made of in Greece. Cherry soda and buttered pop corn at hand with the faint hum of cicadas in the background and the latest Hollywood flick on the big screen and, perhaps, a stray cat stroking by your legs. While the experience may be lacking in the latest state-of-the art technology, it more than makes up for it as far as summer nostalgia is concerned.

Thission
Built in 1935, Cinema Thission is one of the oldest outdoor movie theatres in Athens. Nestled in a green cocoon of vines, with spectacular views of the flood-lit Parthenon, the open air cinema doesn’t need to try too hard to be considered one of the most beautiful cinemas in Greece – and the world for that matter, according to reports by CNN, Conde Nast Traveler and the BBC. The selection of films featured are retro Hollywood flicks from the Golden Age of Cinema, adding to its old-world appeal.
7 Apostolou Pavlou Street, Thision, Athens.

Cine Paris
The brainchild of a Greek hairdresser from Paris, it opened its doors in 1920 on a plot of land that was swallowed up by urban development. It has been operating in its current form at the two-storey building across the road from Filomousou Etairia’s Square in the heart of Plaka since the 60’s (though it closed and was re-opened again with a new owner in 1986). The ground-floor level stocks vintage movie posters and other memorabilia, while jaw-dropping views of the Acropolis upstairs more than compensate if the film’s a dud. Enjoy the film in the arena – or if you want something a little more private, head to the balcony for some privacy. At the bar, you’ll find heavenly cheese pies, hot-dogs, nachos, and of course, usual staples such as popcorn and frozen granita.
22 Kidathinaion Street, Plaka.

Vox
Vox, with its careful selection of art house films, is arguably one of the most historic open air movie-houses in Greece. Built around 1916, its history is interwoven with that of Exarcheia Square. Archaeologist Peggy Ringa took over the cinema terrace from her father after he passed away in September 2013, along with those of Riviera and Aavora (a superb trilogy of open-air venues). Housed in a preservation building, Vox stands as a monument of modern culture, having survived the urban sprawl, the digital age and the economic crisis.
82 Themistokleous Street, Exarcheia.

Cine Votsalakia
Kick off your shoes and sift your toes through the sand while enjoying the latest flick with the waft of sea air. Not only does the cinema have a reputation for its careful selection of films, it also has special rates every Tuesday and Wednesday with tickets at just 5 euros.
4 Vasileos Pavlou Square, Votsalakia Beach.

Cine Alimos
If the idea of seaside cinema is appealing, then it doesn’t get much better than the new Cine Alimos on the south coast of Athens. Salty nostalgia is on the menu with international films from the Golden Age of Cinema making summer nights all the sweeter for it. A very classy outdoor movie venue on the lawn.
Behind Penarrubia (formerly known as Ostria), 43 Poseidonos Avenue, Alimos.

Cine Aegli
The fuchsia leaves of bougainvillea blown by the wind like confetti, the scent of jasmine and the fireflies under the night sky make a summer flick a unique experience. The garden setting is cool and quiet, and the tasty handmade snacks carefully catered by Aegli restaurant make the historic landmark cinema, operating since 1903, an exquisite option for cinemagoers. The venue itself was originally built in the late 1880s as a kiosk aimed at providing Athenians with a meeting spot to enjoy coffee and discuss the news with friends after watching one of the small theatrical shows that used to take place in the Gardens. Now, there are no shows, apart from those on celluloid.
Zappeion Garden, Athens Centre.

Cine Dexameni
How about a flick at an old Roman aqueduct? Cine Dexameni is named after Hadrian’s aqueduct is a perfect hangout with its cascading bougainvillea plants, director deckchairs and tables on which to place a cool drink and snacks.
Dexameni Square, Kolonaki.

Cine Zefyros
For more than a quarter of a century, Cine Zefyros has attracted intellectuals, artists, film critics and the like to Ano Petralona, the student quarter of Athens that is central yet still relatively unknown. Surrounded by great food and drink options, the open air art-house is special when it comes to quality.
36 Troon Street, Ano Petralona.

Pallas
The open-air movie house in Pangrati has a rich history. Operating since 1925, it retains much of its old-world charm, giving cinemagoers the feeling that they’re caught in a time vessel, thanks to the deep red velvet chairs and retro art-deco designs. The floor has a downward inclination that allows for better viewing from the back seats.
109 Ymittou Avenue, Pangrati.

Cine Oasis
True to its name, the little theatre is a little oasis, accessible via a narrow green alleyway that leads to the garden-like atmosphere. All this is set amid the grey blocks of flats in central Pangrati making the find a real surprise for the first-time visitor. A family business that has been operating since 1976, first as a Karaghiozis shadow puppet theatre and then as a cinema.
7 Patrinou Street, Pangrati.

Bomboniera
A reference point for Athens’ northern suburbs, generations of Kifisia residents have enjoyed a summer flick at Bomboniera since it first opened in 1918. Initially, it had a seating capacity of 1,050 though this has now been narrowed to just 500 seats. Burnt twice in 1925 and again in 1928, the open-air cinema venue continues to thrive.
12 Papadiamandi Street, Kifissia.