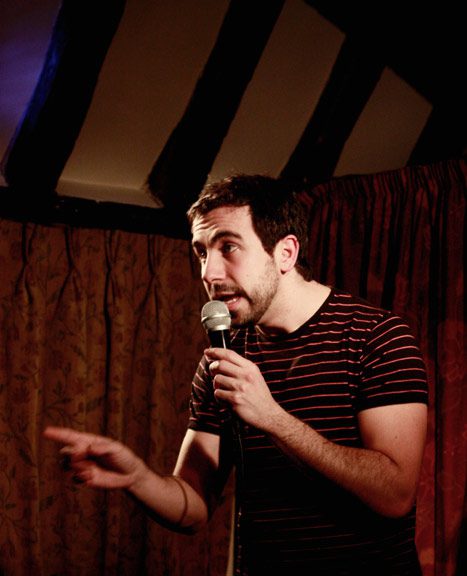 Comedians often have interesting stories to tell. How they go about telling them is what makes them funny, or not.

At age 25 Yianni Agisilaou had been a mobile DJ, a university tutor, had completed a law degree and a graduate program. All signs pointed to a steady, successful career as a lawyer.

Instead, he moved to England and became a standup comedian.

“If you have a look at the career paths of most comedians in Australia, there’s very few people if any, that make a living solely off standup here. People tend to end up on the radio or on the tele, and if that’s what you want to do, that’s great, but it’s not really what I wanted to do,” he says.

The move overseas gave Agisilaou the opportunity to develop his craft to the point that he has become a regular at the world’s biggest comedy festivals: Melbourne, Montreal and Edinburgh.

“I love Edinburgh,” he says. “It kind of gobbles you up and eats you alive, but that’s sort of what I like about it.”

“It’s like in Melbourne, there’s a comedy festival going on in the city, but in Edinburgh the city becomes the festival. There’s just so much creativity going on and obviously it’s going to be a product of Edinburgh being less isolated geographically than Australia, but you get a lot of people coming from a lot of different countries just for the festival.”

And when asked to describe his comedic style, Yianni replies with one simple word.

“Funny,” he says, with an appropriate pause for effect.

“It’s intelligent and its silly and its irreverent and it’s got a lot of characterisation in it. Some of it is stories, some of it is observational. It’s sort of just an expression of me, so I guess what you’re really is asking is, what am I like?” he says.

Yianni’s Melbourne International Comedy Festival show is entitled 96 and one half Things that @#$% Me Off and is on at the Kitten Club until 11th April.

He describes it as a cathartic tirade where topics may include babies on planes, PEOPLE WHO TEXT IN CAPITALS, misuse of apostrophe’s, and Indiana Jones 4 (which was rubbish).