In a landmark event, the Australian Embassy in Athens hosted a presentation by the Australian Hellenic Council (NSW) Director of Media and Policy Research, Dr Panayiotis Diamadis, titled ‘Promoting ANZAC Heritage in Hellas’ 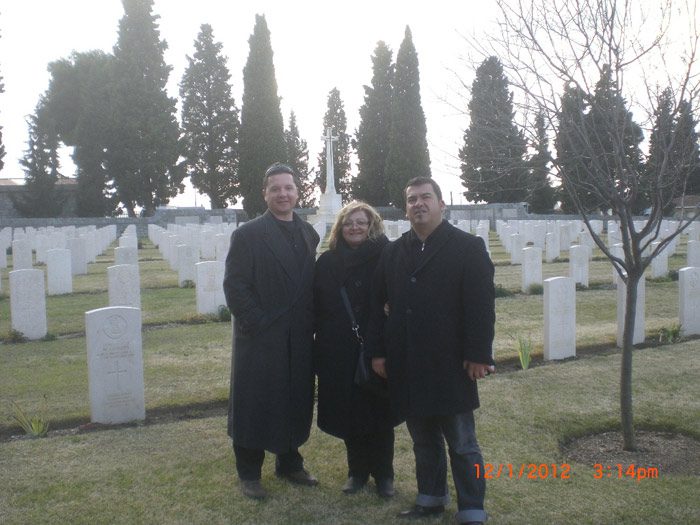 In a landmark event, the Australian Embassy in Athens hosted a presentation by the Australian Hellenic Council (NSW) Director of Media and Policy Research, Dr Panayiotis Diamadis, titled ‘Promoting ANZAC Heritage in Hellas’. The subject of the presentation was the necessity of the development of ‘ANZAC Trails’ throughout Hellas.

The event was welcomed by the Australian Ambassador in Greece, Jenny Bloomfield who noted during her speech that Australian-Hellenic relations have always been ones of close mates. During the event Dr Diamadis presented a plan to develop a series of seven ‘ANZAC Trails’ across Hellas, each trail focussing on ANZAC heritage sites in a particular region. These sites include Commonwealth War Cemeteries with ANZAC burials, war memorials and battlefields, as well as monasteries and villages who helped ANZAC service men and women during the two World Wars and the Hellenic Civil War.

“This is a practical initiative on behalf of the AHC (NSW) in this time when the solidarity of the Hellenic diaspora is most needed” Dr Diamandis said and proposed the creation of seven ‘ANZAC Heritage Trails’ that may function as either self-guided or escorted pilgrimages in the footsteps of the first or second generation ANZACs. The seven trails Dr Diamadis presented were those of Attike (Attica); Central Hellas; Southern Hellas; Aegean Islands; Krete (Crete); Central Macedonia; and VII Western Macedonia.

According to Dr Diamandis, this program does not only aim in promoting Australians and New Zealanders to visit Hellas, it is also cultivating understanding of the Australian-Hellenic symbiosis through development of the Australian Hellenic heritage in Hellas.

Other dignitaries attending the event were Deputy Heads of Mission of the Australian and Japanese Embassies in Athens, Mr John Pandazopoulos MLA (Member for Dandenong – Victoria and President of the World Hellenic Interparliamentary Union), Mr Costa Cotsilinis, Honorary Consul-General of New Zealand in Greece, Dr Amelia Brown (Lecturer in Classics and the History, Culture and Literature of Ancient Greece and Rome, University of Queensland), Dr Nikos Lygeros (Lecturer in mathematics, University of Lyon, France), Mr Yiannis Chatzieleutheriou, President of the Union of Pontian Youth of Attike, as well as Embassy staff and members of the Australian Hellenic community in Athens.