Restoration: Tunisia with a touch of Hellenism

Billy Cotsis takes us through a Hellenic history of Tunisia

Restoration. A word that stood out for me on a trip to Tunisia – a word which succinctly captures what the Greek community are aspiring to and what I in turn have been seeking for years.

Tunisia is a picturesque Mediterranean country: pristine beaches to the north, the Sahara in the south, the Arab culture of the east and a touch of influence from the west (via the French colonial years). It has been a melting pot of history’s great cultures: Carthaginians, Romans, Byzantines, Berbers, Arabs, and Ottomans.

What most people won’t know is the long history of Greek speakers in Tunisia. Indeed, across North Africa, the presence of Greeks can be traced back to the merchants and traders who set up towns in Egypt in antiquity through to the Byzantine occupation of the region from 535 CE – the last Byzantine territory to fall was Ceuta (a Spanish enclave in Morocco) in 711 CE. In fact, for the uninitiated, Greek cities could be found in Libya, notably Cyrenaica in Egypt under Alexander and the Ptolemies and a number of Byzantine cities developed in the sixth century CE.

The only Hellenic city in antiquity that was established in Tunisia was by the Hellenes of Cyrenaica in the fifth century BCE; a port called Neapolis (Nabuel). It could have been far different had Agathocles of Syracuse (Sicily) defeated the Carthaginians during a lengthy war between 311 – 306 BCE. Another settlement with a connection to the Hellenes is the town of Metline, founded in the 1500s by Ottoman soldiers from the beautiful island of Lesvos. The admiral Hayreddin Barbarossa from the same island was prominent in Algeria and Tunisia during this era. 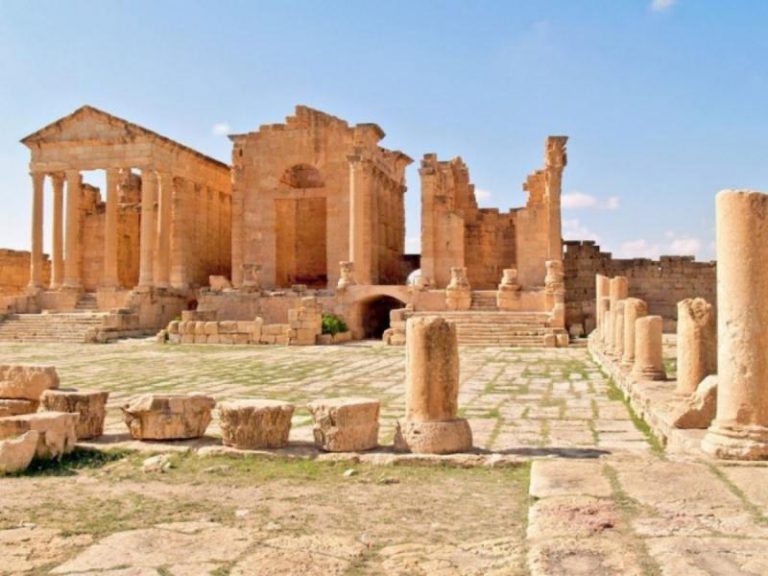 Greek was, arguably, one of North Africa’s key languages for over 1,000 years. However, the advancing Arabs, having swept through Egypt during the 640s CE finally overpowered a gallant Byzantine resistance in what is now Tunisia, by 698. This led to the decline of the Greek language in North Africa (except in Egypt’s Alexandria), and a decline in Christianity as people steadily chose to convert to Islam or migrate to other Byzantine territories.

I was fortunate in 2009 to interview the then head of the Greek church of Tunisia, the Most Reverend Alexios (Leontaritis) of Carthage, who held the significant and ancient title of the Metropolitan of the Archdiocese of Carthage in northwestern Africa, part of the Greek Orthodox Patriarchate of Alexandria and All Africa. (The position has been held by His Eminence Meletios (Koumanis) since November 2016).

I asked him what role the church was playing in Tunisia and he told me, “Restoration…of the Greek traditions.”

The Most Reverend Alexios (Leontaritis) of Carthage, is a relatively young and energetic person. His title is significant as it dates back to the Byzantine era. The congregation in the capital of Tunis is about 60-people strong. I was privileged to attend a service on two occasions and was impressed by what I witnessed in the stunning church of St George, built by the Hellenic community in 1847. The passion of the small group made it feel as though there were hundreds of people worshipping and praying. Interestingly, the Greeks in Byzantine times called themselves Romans so it’s ironic that the church is located at Rue de Rome (just a few blocks from Greek Street). In a land where 98 per cent of the population adheres to Islam, I felt that the small Hellenic community is more than maintaining a presence; they have been resurrecting the Hellenic spirit of yesteryear. You see, not only was there a strong Greek-speaking presence during early medieval times, the Hellenic community in the 19th century numbered an impressive 8,000 people. Many of them were sponge divers from the Dodecanese Islands as well as traders. However, over time the Hellenes who had moved to Tunisia for commercial activities gradually returned to Greece.

Alexios was responsible for all the Greek churches in Tunisia, Morocco, Algeria and Mauritania, which number about 10 in total. What is interesting is that the church has jurisdiction over the Russian church in Bizerte, Tunisia, and another in Rabat, Morocco. In addition, there is a good relationship with Catholicism. In Mauritania, the Greek Church conducts services in the Catholic Church. In turn the Catholics make use of the Greek Church in Sfax (Tunisia). It seems like a long time since the Greek Orthodox and Catholic schism of the Middle Ages.

His Eminence has, over the years, conducted liturgy in as many of these churches as possible, which amounts to significant travel across North Africa. In the courtyard next to the Greek church in Tunis is the office for the Hellenic community.

I met with Kyria Dina, a representative of the church and the Greek community. She moved to Tunisia in the 1980s, marrying a Tunisian. Her role has been to oversee the Greek language school which has over 40 students – a mix of Hellenes and Tunisians and to communicate with the Hellenic community. I met one of her students, Ahmed, then aged 22, who was learning Greek… that way he can communicate with his Greek-speaking girlfriend! It appears that this is not a one-off. There are many ‘mixed’ marriages in Tunisia and through a Tunisian forum I communicated with Roula. She is Greek, lives in London, is married to a Tunisian and travels there whenever she can.

I was keen to find out if Tunisians knew much about the Byzantine history of the country. I was pleasantly surprised by the knowledge exhibited by two friendly locals I met who were employed by Tunisia.com and who live in the picturesque seaside town of Bizerte, once a fortified Byzantine town. Sipping my coffee and talking to Ramzi and Sana, I fixed my eyes on the old walls of the Medina in the background. These walls, known as the Double Kasbah, contain traces of the original Byzantine fortifications. Ramzi and Sana told me how they learnt about the Byzantine presence at school and it was they who told me about Nabuel. However, not everyone I met was aware of the Byzantine presence in Tunisia, as I usually received puzzled looks whenever I asked about Byzantine ruins. Though this can also be attributed to the fact that few people speak English (one of the charms of a visit to Tunisia).

As a student of history, Carthage was always a favourite subject of mine; sitting in the classroom of school debating my teacher about the superpower status of ancient Carthage, I never thought I would actually visit. Whilst Carthage has an amazing array of archaeological sites, it was the Byzantine ruins that I had come to see. At the Antoinine Baths, facing the Mediterranean, I found many Byzantine ruins. This includes the sixth century Basilica, Baptistery, and Christian era statues and mosaics.

I also located the ruins of the Byzantine Basilica on the road to Carthage. The Basilica is known as Damous el Karita. However, I struggled to find the excavations of a Byzantine site, Bir Ftouha, on the edge of the archaeological zone. I asked locals: a police officer on horseback, a shepherd, a friendly German jogger, and anyone else who I came across. I must have spent two hours walking in the middle of nowhere, to no avail. However, after several kilometres and with the advent of night skies, I came across an impressive Roman forum, which apparently contained Byzantine ruins but not those I had come to photograph.

On another trek in the countryside I visited Oudna. This is a site I won’t forget in a hurry. After flagging down a taxi to take me the 25 km outside the capital, the driver had to make a stop, for a call of nature as he put it in a bottle on the highway! On the return journey, another excitable taxi driver wanted to show me his collection of pictures and tell me everything about Tunisia… in French. Despite language barriers, I found the taxi drivers in Tunisia to be fantastic, generally honest and entertaining, and my passport to Byzantine sites.

Over the years I have become accustomed to being the only foreigner stuck in the middle of nowhere looking for sites. At Oudna, I was on my own with archaeologists, workers, a security guard, and dozens of sheep. Unlike Carthage, there appeared to be a decided ignorance of Byzantine ruins. Most aspects of the site appeared to be labelled as Roman, even though some of the buildings were built or upgraded during Byzantine times. After pointing this out, I was given access to maps and information in an office. Thankfully my Arabic is rusty, and I could make out…. well, actually I couldn’t understand a word!

At Oudna, used by Byzantine commanders as a base almost 1,500 years ago, I found key ancient sites, all impressive and well-preserved. The Capitol (the Forum) was upgraded during Byzantine times and turned into a fortress. Interestingly, a modern farmhouse is located inside the fortress. The best way to identify Byzantine aspects of the site are by the large blocks of stones used on the exterior of some of the buildings; the Romans used smaller bricks.

Other Byzantine sites in Tunisia include Ain Tounga, a fortress located in Tebersouk, ruins at the inland Musti, a fortress and church at Haidra which are located near the border with Algeria, ruins at Sbeitla located near the Sahara and an intact oil press at Thuburbo Majus. Djerba is another site, an island off Tunisia, that has Byzantine ruins and it is believed that Odysseus visited.

During my teenage years I turned my back on my Hellenic identity. However, I have spent the last decade restoring my sense of what it means to be a Hellene, and the more I travel to places in the diaspora with Greek speakers and/or a connection to our Byzantine past, the more I am glad to have embraced and restored my own sense of heritage.

In Tunisia, there is a small group of dedicated people who are working on the restoration of the Hellenic customs and tradition to an area that was once thriving with Greek speakers. I know that they will succeed, and should I ever return I am sure the fruits of their labour will continue to be evident.