Perth Glory’s Patricia Charalambous almost quit football after ongoing rejection, but her will to succeed saw her play in Europe and feature in a W-League grand final alongside Matilda’s superstar Sam Kerr Patricia Charalambous of Perth in action during the Round five W-League match between Canberra United and Perth Glory at McKellar Park in Canberra.

When Patricia Charalambous talks about her debut for Perth Glory during last season’s W-League campaign the 23-year-old Greek-Cypriot finds it hard not to get emotional.

“I’m getting goosebumps now just telling you the story and how everything panned out,” she tells Neos Kosmos.

Several Matildas such as Alanna Kennedy and Amy Harrison are also former alumni and Charalambous was also expected to follow the same development path.

However, after graduating Charalambous found herself on the outer and the small in stature 4ft 6inch footballer had to make a big decision on her future.

“All these players were getting chosen for the Western Sydney Wanderers and Sydney FC but I never got picked for anything,” she says.

“The highest thing I ever got picked for was school sport. Never for any NSW squad, Mini Matildas or anything like that. So, I went to Cyprus instead and played Champions League at 18 and that was just amazing.”

Being overlooked proved to be a blessing in disguise for Charalambous as the then teenager not only played senior club football in Cyprus, she was sharing the field with Europe’s elite.

“That was probably the highlight of my career at such a young age to be able to play Champions League, with world-class players from America,” she says.

“I was training with players like Jasmyne Spencer who now plays for Orlando in the National Women’s Soccer League, but who also played for Canberra United and Sydney FC. I also played with Leanne Sanderson who played for Orlando too, but was with Arsenal when she was only 14. Knowing her and listening to her story was just incredible as she’s a great player. Listening to what they went through in their life gave me positive vibes, like ‘don’t give up’ and ‘you’re still very young’.” They have also become lifelong friends.

Besides playing in Europe’s blue-ribbon club competition, Charalambous felt a sense of pride in following in her father’s football footsteps.

“It was very emotional, that’s for sure,” she says.

“I felt proud to wear his name on the back of my jersey because that’s his homeland. All I ever want to do is make my dad proud and to have him there to watch me play was just amazing. It was the best moment in my life. He was a footballer back then and I’m a footballer now. How many people can say that they’ve done that? It’s a very special thing for me.”

What makes Charalambous emotional about her debut with Glory’s team was the roller coaster journey that she had to take before she stepped out on the pitch.

“Before I started the last season with Perth I spent the whole year training in Sydney,” she says.

“So, I was doing four sessions a week and really pushing myself to my limits because I really wanted to get into a W-League team.
“Prior to that I had trained with Western Sydney Wanderers and they wouldn’t take me. Then I trialled with Newcastle Jets that same year and they didn’t take me either. I was literally about to give up. I thought ‘that’s it’. But I had one more trial at Perth and I flew across the country and I had a week of trialling there and Perth coach Bobby Despotovski gave me the contract.”

So, when Patricia came out on the field to make her debut for Perth Glory she had one thing on her mind.

“Words can’t describe how I felt when I was told I was starting that game against the Wanderers,” she says.

“I was really excited and nervous. Especially as I was playing against the team that told me I wasn’t good enough. I was trying to pump myself up, and the adrenaline just got me.”

She says it put her in a state of mind where she played her heart out in every tackle and stopped every ball that came through.

“During the game I gave a long ball through to Sam Kerr and she scored. That was one of the happiest moments of my career so far. Playing a ball straight to Sam and seeing it bounce right in front of her and seeing her score a goal was a proud moment for me. I played a really good game and we won.” 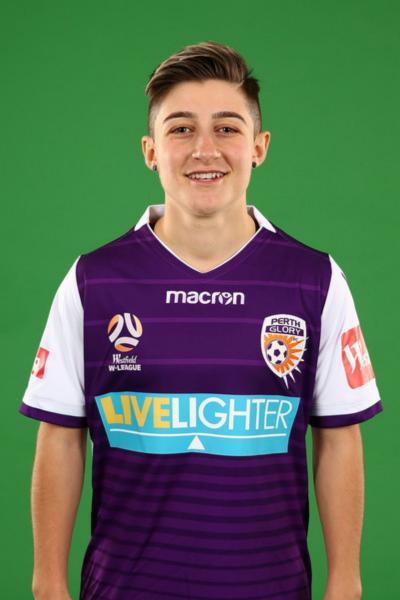 Charalambous’ debut season also included an appearance in the 2016-17 W-League decider and even though Perth lost to Melbourne City she says playing in the biggest game of the season was a thrilling experience.

“We had a really good season last year, everyone was on a high when we played against City in the grand final. But it turned out to be a tough game,” she says.

“We fought until the final whistle and we did really well although we lost 2-0.”

After playing left back last term, Charalambous moved to the left wing in this campaign and she says her attacking partnership with Young Australian of the Year Kerr blossomed even further.

“This season I’ve played a couple of games up front with Sammy,” she says.

“I really enjoy playing every minute next to her. Another of my happiest moments was when during a game Sam pointed to space, I drilled her a ball down the line and she ran on to it and she crossed it across goal for Rachel Hill. It’s that combination that I just thrive from. It’s been amazing and unreal because she is a phenomenal player. I am so honoured to play next to her and I am so grateful.”

Unfortunately, Perth couldn’t follow up last year’s Grand Final campaign this term and narrowly missed out on making the W-League finals this season. After two fruitful years at Glory, Charalambous is hoping to get back to Europe during the Australian off-season.

“I’ve played more this season than I did last year and I am so happy,” she says.

“Obviously I have bigger goals now that I have set myself. I have tasted that European style of football and I am really attracted to it and want to test myself there. There are a lot of options but nothing is completely confirmed yet. I just want to keep pushing myself and see what I am capable of.”

But while Charalambous is dreaming big, the 23-year-old says her roots keep her grounded, and the belief her family showed during those formative years is still a source of strength to this day.

“I’ve always had that passion to never give up,” she says.

“I always think of my dad and how he saw me struggle when I was growing up because I was so small and wasn’t getting picked for a lot of things. But, he always told me not to give up and to keep pushing forward. That my time will come and that I just had to keep working hard and someone out there would give me a chance.
“I think that was built up in my blood. To see what my dad grew up with and being in a country like Cyprus. He didn’t really have a lot of things and seeing what he went through and how he pushed himself in those times inspired me. He had to work a lot, and had to support his family and his brothers and sisters. I have that inside of me too, to not give up and to keep pushing forward.”