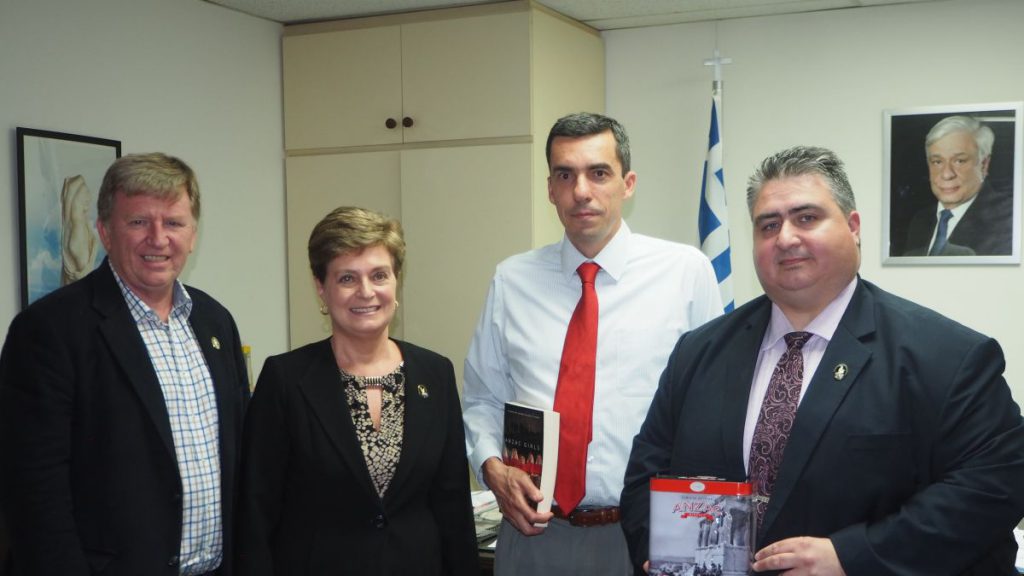 Mr Tarlamis welcomed Mr Michalopoulos to Melbourne on behalf of the committee, stressing the strong links between Melbourne and Greece, including through the Anzac tradition across both world wars. He explained how the committee has been working since 2011 in both Australia and Greece to raise awareness of this link, with the support of the descendants of the soldiers and nurses who served in Greece, and the Hellenic diaspora in Australia.

“Many Australian and Greek families in Australia share this bond. My own family contains those born on Lemnos as well as those descended from a young digger from Blackburn who served on Lemnos in 1915. It is stories such as these that are the living embodiment of the Hellenic link to Anzac,” he said.

Mr Tarlamis went on to explain the committee’s work in funding and erecting the first major memorial in Australia to the role of Lemnos in the Gallipoli campaign.

“We were convinced of the need to create a lasting legacy for future generations, a reminder of the Lemnos link to Anzac. The committee raised over $300,000 for the memorial and commissioned one of Australia’s pre-eminent commemorative sculptors, Peter Corlett, OAM, to create it. In his design, Peter was able to translate our passion into a memorial that combines Anzac and Hellenic themes,” he said.

Ms Despoteris explained the work we have undertaken in Greece, supporting commemorative initiatives both on Lemnos and in Athens, especially during the Centenary of Anzac in 2015.

“It was a great honour for us – and especially those of our Committee with connections to Lemnos – to be able to provide historical presentations and to assist in bringing the Royal Australian Navy to the island – as part of these important commemorations,” she said.

She described the important work carried out to encourage the linking of schools in Greece with those in Australia, building awareness across the generations.

A focus of the discussion was the recent Victorian Government announcement of support for commemorative initiatives on Lemnos totaling $180,000. These include the provision of new educational resources for Mudros Secondary College on Lemnos as well as the funding of a special tour of former Victorian Premier’s Anzac Student Prize recipients to Lemnos in October 2018.

One of the other important initiatives will be the installation of a new memorial on Lemnos, commemorating the building of the Australian Pier near Mudros. Mr Claven explained that this initiative grew out of his extensive research into the Anzac presence on Lemnos in 1915. The committee is working with the local authorities on Lemnos to bring this to reality.

“The Australian Pier was built north of Mudros by Australian soldiers in March 1915 as the first major piece of infrastructure erected by the Allies as part of the transformation of Lemnos into the base for the Gallipoli campaign. It was here that the Australian troops came ashore, leading to the first Australian field hospital to be established on the Island. How amazing that this pier erected in 1915 is still serving the local Lemnian community,” Mr Claven said.

He pointed out that the erection of this memorial is just one component of the plan to erect a series of similar memorials throughout Greece, commemorating the Anzac link to Greece across both world wars, creating an Anzac commemorative heritage trail to assist and encourage a new generation of commemorative visitors to walk in the footsteps of the Anzacs in Greece.

The Consul General stated that he had visited Lemnos in the past and was aware of its connection to the Gallipoli campaign.

This year is a special year in our calendar as it signifies the centenary of the Armistice of Mudros of October 1918. The committee is hopeful that they will be successful in their proposal to hold a special commemorative service in the Sanctuary of Melbourne’s Shrine of Remembrance in commemoration of this important event which brought an end to the First World War across the Middle East and northern Greece.

Mr Claven spoke of how the committee has been able to work cooperatively to assist other Greek community groups to undertake commemorative initiatives. One of the most important of these is the George Treloar Memorial Committee, who will unveil the new memorial in Ballarat in October. He explained that committee members have also played a role in helping establish the new Battle of Crete and Greece Commemorative Council as well as working with individual Greek community organisations, such as the Papaflessas, Navarino, PanCorinithian, Lefkadian, and Thessaloniki associations.
The committee looks forward to showing the Consul General the Lemnos Gallipoli Memorial at Lemnos Square, Albert Park, as well as the Hellenic Anzac Memorial in the gardens of the Victorian Parliament.

Mr Michalopoulos congratulated the committee on its success to date and welcomed the opportunity to take part in coming commemorative events. He thanked the committee for raising awareness of this important link between Greece and Australia and looked forward to working with them in the future.

The committee presented the Consul General with last year’s Anzac Commemorative Biscuit Tin featuring the Anzacs on the Acropolis in 1941 along with a copy of Peter Rees’ book Anzac Girls, featuring the role of the Australian nurses on Lemnos.