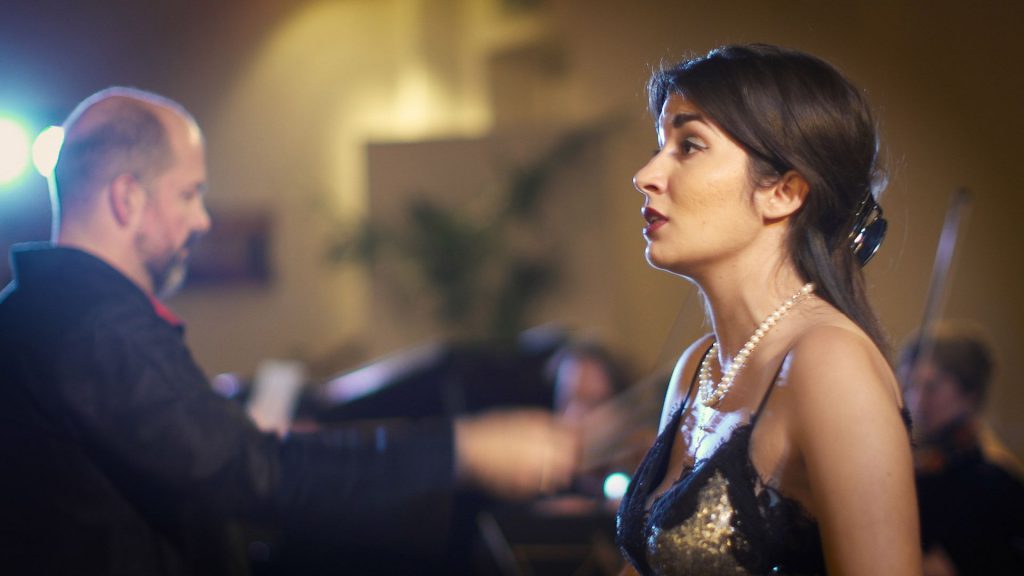 Greek Cypriot Australian soprano lirico Christiana Aloneftis is back in Melbourne for two performances, before she heads back to Europe in April, to permanently relocate in Munich to further pursue her career.

The talented vocalist first left home in 2014, after getting the Acclaim Italian Opera Ambassadorial Scholarship. She made her Italian debut at Fondazione Pergolesi-Spontini in the role of Agata (Il Flaminio – Pergolesi).

Soon after the young soprano completed an intensive Bel-Canto course at the Accademia Teatro alla Scala, Milan. Aloneftis already had a BMus and a DipLang in Advanced Italian from The University of Melbourne in 2012 in addition to a Master of Interpreting and Translation degree from Monash University which made her life in Italy easier.

Since her time abroad, she has participated in masterclasses and lessons with Luciana Serra (La Scala), Lella Cuberli (La Scala), Dimitris Kavrakos (MET) and Enza Ferrari among others in the opera scene.
Amidst fiery preparations form her Melbourne recitals, she sat down with Neos Kosmos to share her achievements and her dreams for the future.

You have come back to Australia after a long time overseas, where you performed at various venues. What valuable experiences did you bring back with you?
After completing my 2014 scholarship on Bel Canto in Milan I moved to south west Germany where I spent three years studying the German language while taking private singing lessons. That was what spurred my artistic journey exploring a variety of great roles in the opera repertoire including Wolfgang Amadeus Mozart’s Barbarina – an aria from The Marriage of Figaro, Musetta (Connecticut Lyric Opera/ 2016 Greve Opera Festival), Zerlina, Susanna, Despina (EMA 2016 and The North Czech Philharmonic Orchestra) and most recently my performance in the role of Annina with Opera Classica Europa (Germany 2017).

During my time away I won the 2016 ENMP full-scholarship, the 2015 Mike Walsh Fellowship Award and the 2014 Cyprus Vocal Scholarship Competition and last year I was the youngest finalist in the Australian Opera Awards.

I also made my US debut as the soprano soloist for Bach’s BWV 32 ‘Liebster Jesu, mein Verlangen’ with The Connecticut Virtuosi Chamber Orchestra and was awarded the Acclaim Rotary Ambassadorial Scholarship to support my studies. To sum it all up, I feel that it has been a very special four year period full of knowledge gains and practical stage experience.

At the moment you have scheduled two recitals in Melbourne. The first is on Saturday 17 February. Where are you singing and what will your repertoire be?
My first recital, organised by the Lieder Society of Victoria will be held at 5pm on Saturday 17 February 2018 at the Richmond Uniting Church on Waltham. I will be accompanied by my pianist and colleague, David Barnard and the song repertoire performed will investigate varying visceral human emotions, from insanity to ecstasy. Music by Schubert, Strauss, Poulenc, Debussy, Rimsky-Korsakov, Rachmaninoff and Dvorak.

Will your second recital be different?
The second recital will be held at the iconic not-for-profit theatre and gallery in Melbourne, fortyfivedownstairs, in Flinders Lane at 7pm, Friday, 2nd March.

David Barnard will, once again, be accompanying and baritone and guest artist Stephen Marsh will also be performing with me. This repertoire will be similar to that presented on 17 February, however, there will be a stronger operatic focus with scenes and arias from La Traviata, Don Carlos and Lucia di Lammermoor.

Both recitals are fundraising events to raise money for my training with Bavarian State Opera professionals in Munich from April 2018. I have set up an Australian Cultural Fund campaign where interested sponsors can make tax-free donations of $2 or more.

I also have a last Melbourne performance, on 18 March. It’s the Australian premiere performance of Rimsky-Korsakov’s one-act treasure, ‘Kashchey the Immortal’ in Melbourne’s prestigious Recital Centre in Southbank. I’ll be performing as Tsarevna. I am very excited for this.

Why did you choose this particular form of classical music? What draws you to the opera genre?
Opera, as an art form, encapsulates the height of human emotion and fuses this with the exceptional power of the human voice and the art of storytelling. It is, in my opinion, the most powerful art form and I feel that it provides me with the strongest medium for self-expression.

How do you feel about your accomplishments so far and how far do you dream of going?
My next ventures appear to be quite exciting to be honest. In April this year I will be relocating to Munich to take on an intensive training and mentoring opportunity with Bavarian State Opera professionals at one of the top six opera houses in the world. There I plan to engage in role study; I want to perfect my Lucia, Violetta and Pamina performances as I will attempt a spot at the Opera Studio. I’m set to have a series of agent auditions and preparation for participation in major international singing competitions.
Come May, I’ve already booked a number of concerts in Cyprus where I will perform French and Russian classics.
Moving on to October, I’m set to create my own recital for the prestigious Pharos Arts Foundation in Cyprus Young Artist Series.
I feel that my dreams are simple yet hard to achieve. Overall I want to be able to sign at a very high international level and proudly serve the power of music.

Tickets for the first recital can be purchased online at the following link or at the door: https://www.trybooking.com/book/event?eid=340000
Tickets for the second performance can be purchased at the venue or via this link: http://www.fortyfivedownstairs.com/wp2016/event/none-lonely-heart/
For more information head to https://australianculturalfund.org.au/projects/bavarian-state-opera-trai…