With smoke and aromas billowing through the street, attendees were enticed to try a plethora of food options to fuel up for the endless signing and dancing that followed 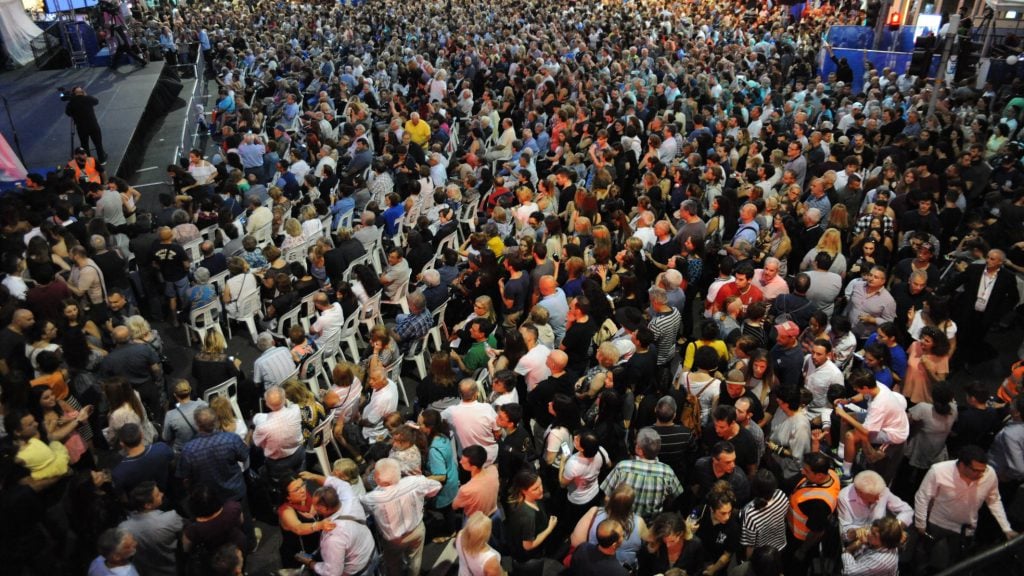 Over 150,000 people flooded the historic Lonsdale Street Greek Precinct on the weekend to be part of the 31st Lonsdale Street Greek Festival. The expanded offering saw the Festival take over the city’s busiest thoroughfare from Swanston Street right up to Exhibition Street making this year’s event the largest in its history.

Wurundjeri Elder Ron Jones offered a Welcome to Country before The Hon Daniel Andrews (Premier of Victoria) officially opened the Festival and pledged that his government ‘will fund the Lonsdale Street Greek Festival $600,000 over the next four years with a further $337,000 to complete the installation of the Parthenon Frieze replica at the Greek Centre.’

Others who took part in official proceedings included The Hon Matthew Guy (Leader of the State Opposition), The Hon Kelly O’Dwyer (Minister for Revenue & Financial Services) with Ms Julia Banks (Federal Member for Chisolm) representing the Prime Minister along with The Hon Bill Shorten (Leader of the Federal Opposition), Councilor Kevin Louey (City of Melbourne), His Grace Bishop Ezekiel of Dervis, Her Excellency Ekaterini Xagori (Ambassador of Greece to Australia) and Bill Papastergiadis (President of Greek Community of Melbourne).

Before Crete born Giannis Haroulis hit the stage on Saturday night, the UNESCO recognised tradition of Momogeri (presented by Pontiaki Estia) was performed by international dancers from Kozani, presenting a captivating performance with dance groups from local community group Pontiaki Estia. By the time folk musician Giannis Haroulis appeared on stage with his band and the uniquely talented Konstantis Pistiolis (Villagers of Ioannina City) Lonsdale Street was overflowing, as all stages erupted with very different types of entertainment. The AA Holdings Stage was inundated with Greek-pop fans when DJs from Beautiful People turned up the volume. COMPETITION WINNERS ACROSS THE WEEKEND

Zorba ‘til You Drop, proudly presented by Touchdown Tours.
Dion Manasis danced away with a flight to Greece after 61mins of continuous Zorba-ing.
My Baklava is Better the Yours
Christine Polyzos impressed judges with her baklava recipe, beating 16 other entrants. She walked away with a delicious hamper from Kathy Tsaples (Sweet Greek) and the crown of Best Baklava 2018.
Magic Mic – Singing Competition
Elizabeth Pardallis wooed judges with her interpretation of Στο Θεό Με Πάει (Eleni Fourera) taking home $500 from the National Bank of Greece and a recording studio session at Bakehouse Studios.
On Sunday afternoon the Festival attempted the World’s Largest Zorba Dance creating one long chain of dancers moving to music amplified across all three stages and performance areas throughout the street. People of all ages linked arms in an inspiring attempt to make history while having a lot of fun.
With smoke and aromas billowing through the street, attendees were enticed to try a plethora of food options. Mythos Bar partners Elyros served up slow cooked lamb, kalitsounia (hand made cheese pies) and traditional Cretan salads while the bar stirred some new Greek-Inspired cocktails. Truly a Festival of food, the Procal Greek Kitchen hosted some of Melbourne’s favourite chefs and cooks including Kathy Tsaples (My Sweet Greek) Phil Vakos (Bahari + Gringlish), Angela Nicolettou (Angela’s Kitchen), Mary Valle (Mary’s Kitchen) and Spiri Tsintziras (My Ikaria, out April 2018, and Afternoons in Ithaka) along with Festival newcomer Ella Mittas fresh from running a month-long event of Greek style feasts at Gertrude Street Enoteca. Bartender extraordinaire Jack Sotti of Boilermaker House, inspired by his Greek-Cypriot roots, flaunted his award-winning skills with a range of Greek-flavoured cocktails. A 101 lesson in brewing Greek coffee was delivered by our friends at Oasis and Vikki Moursellas (My Kitchen Rules) joined presenters as the host of the weekend.

Later in the evening, the Procal Greek Kitchen was transformed into an intimate performance stage hosting local bands including The Habibis, Epirotiko Ensemble, Pascal Latra & The Philhellenes and Ravaisi.

Celebrating diversity and cross-cultural collaborations was a key focus in this year’s Festival program with moving performances such as The Argonauts of the Pacific, which used dance to share the cultural links between the Maori people and the Pontic Greeks through the richness of their shared seafaring histories and including a performance of the Haka (traditional Maori dance) and Serra (Pontic war dance).

As a first for the Festival, the entire weekend was broadcast live via a continuous feed through YouTube, making it a virtual event accessible by anyone with an internet connection. This, along with an impressive social media presence across the weekend helped to reach over 1million people across the last 28 days. Over 587K engaged with the 31st Lonsdale Street Greek Festival page, while more than 519K engaged with The Greek Centre’s page. Over 240K watched videos and more than 200K engaged with posts. The Greek Community would like to thank every single sponsor, performer, musician, dancer, food presenter, competition entrant, MC, stall holder and volunteer being part of the Greek Community’s largest event.