‘Theatre is one of the last communal rituals we have left’

Theatre maker Dino Dimitriadis staged a ‘queer’ version of Metamorphoses, a play based on Ovid’s classic poem for Sydney’s Mardi Gras, using Greek mythology as a parable for the essence of humanity 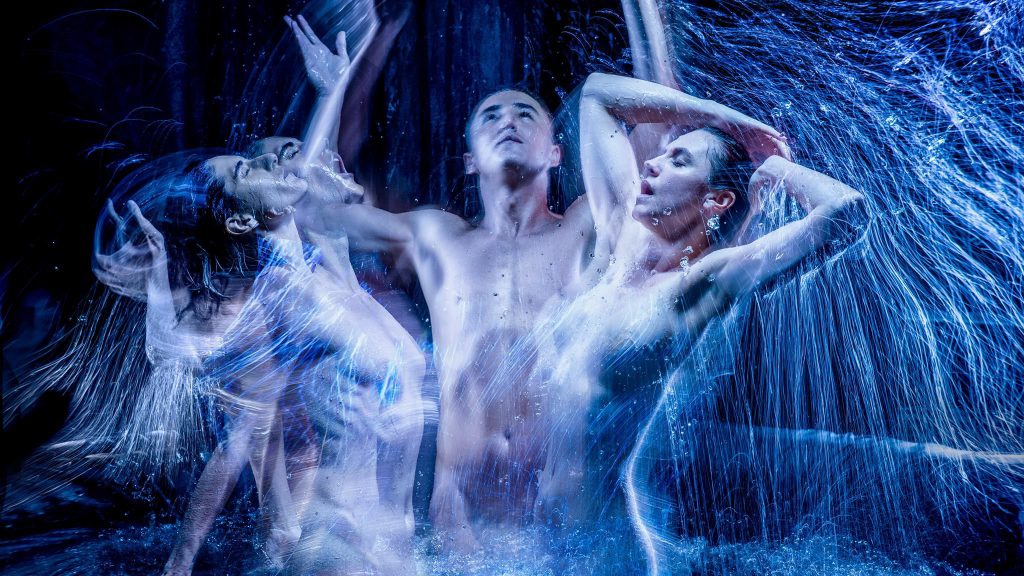 As a cultural festival born out of a political protest, Sydney’s Mardi Gras is committed in showcasing cutting edge performances. This year’s edition is particularly special: not only because it marks the 40th anniversary of the festival, but also because it takes place after a seminal moment in Australia’s history, the legalisation of same-sex marriage.

All participants went to great lengths to make sure to celebrate the occasion. For Dino Dimitriadis, this meant going back to the roots – not only his own, but to humanity’s: the tales of Greek mythology. As the artistic director of Sydney’s Apocalypse Theatre Company, he believed that no play would be better suited than Mary Zimmerman’s Metamorphoses, an innovative take on Ovid’s classic poem, recounting parables of love, death and the human condition through the tales of gods, heroes and mortals.

“In the context of Mardi Gras’ 40th anniversary, I saw this play as being ultimately a celebration of unique and different and ever changing identities and a celebration of what actually draws us together in a shared humanity,” says the director.

The word ‘metamorphoses’ itself means transformations and Zimmerman’s award-winning play champions the concept by its fragmented approach to Ovid’s poem. Dimitriadis took it even further, breaking down the play into more fragments, masterfully weaving them together. What’s more, in what is both a nod to Mardi Gras’ mission and to the nature of Greek mythology, where tales of playful sexuality and gender-shifting abound, he changed the gender of many of the poem’s protagonists, presenting Ovid through a queer lens.

“I couldn’t have done this version of Metamorphoses 10 years ago,” he says, explaining the significance of the moment.

“There is a lot to celebrate, about how far we’ve come. But for me it is also important to show how far we still have to go. Because while we have made progress in the civil rights field, we still have a lot of small-mindedness around gender and sexuality in society.”

His production of Metamorphoses, co-presented with Red Line Productions at the Old Fitzroy Theatre, aims to stir that dialogue.

“I hope that people will come and experience these extraordinary stories, some of which they’re familiar with, and see them in a new way, and actually see, in the way we told the stories, that those sorts of constructs of gender and sexuality are irrelevant and that there is something bigger than them,” he says describing how this goal has already been won.
“It’s been amazing to see how certain audiences who have no experience of queer theatre but also no real experience with queer people, the more heterosexual, conservative audience who have come to see the play, have commented to me about how, after the play starts, it doesn’t matter to them that there are two male bodies or two female bodies because they get so drawn in to the bigger ideas and and the humanity of the work.”

Dimitriadis acknowledges that it was a risk for the Old Fitzroy, a venue associated with more classic, text-based theatre, to feature such a play.

“This is sort of game-changing programming for this particular venue,” he says.

“They took a really big gamble and they were really positive and encouraging.”

This is not to say that Metamorphoses will alienate a conservative theatregoer. On the contrary, the director stresses how accessible it is.

“It’s wildly theatrical and keeps moving and evolving,” he says, urging the audience to come to the play without making any preparation beforehand.

“I think that if anybody has to prepare to go to the theatre, then we as theatre-makers have failed to make a work that people can access,” he says.

“People can access this work with any knowledge whatsoever of mythology. They may want to go and explore it after the show and I think that this is interesting.”

In fact, this is what he thinks the role of theatre is.

“Theatre is one of the last communal rituals that we have, it’s one of the last things we have left where people come and sit quietly in the dark to experience something together. I’m interested in how people feel watching each other as audiences and what sorts of conversations they have afterwards with their friends. That is the magic of theatre for me.”

Theatre is one of the cultural bequests of ancient Greece to the world, and Dimitriadis says that it is his Greek background that allowed him to approach the myths that he was taught since childhood, through this innovative approach.

“It’s the first time I’ve engaged with work that is related to my Greek background,” he says, “and it’s very personal for me to make a project like this. Because although Greek culture is evolved, Mediterranean culture in general can be very conservative when it comes to issues of gender and sexuality. It’s extremely difficult for people of strong cultural backgrounds to express their identity, so for me to take our history and present it through a queer lens, is not just personally empowering, but it’s also a bold cultural statement.”

Having said that, he admits to feeling a deep connection with his Greek identity.

“What I love most about being Greek is that there is a deep humanity and culture and tradition and history,” he says.

“I love the spirit and how people value family and how they are open and talkative. Greeks are not afraid of conversation.”