Yo! Mafia: a square peg in a round hole

She was one of the first female DJs in Australia's underground urban scene in the 90s, and has gone on to become one of the country's most sought after party DJs. Meet Yo! Mafia

Yo! Mafia performing at the Hunter Valley. Photos: Supplied

Growing up in Adelaide, Yo! Mafia lived in a household with an appreciation of music, recalling the sounds of Lionel Ritchie, Stevie Wonder, and Michael Jackson filling the home, or Elvis if her dad was picking the tunes.

So it’s not hard to see why she eventually decided to make music her life, and music with soul, at that.

An actor-cum-DJ, it would be the decision to leave behind her pursuit of acting, all she’d ever known up until the age of 27, to take up a full-time gig as a vinyl buyer in a secondhand record store that would set her life path, to become one of Australia’s most well-known hip-hop DJs.

“I figured I wasn’t really making a living from the acting; I’d been doing it for so long and it was so competitive and hard – especially back in the 90s, there were very few ethnic roles, so it was kind of hard for me to get cast,” she reveals.

In her new role, she was constantly coming into contact with records, old and new, many original pressings and saw her love and appreciation of hip-hop grow.

“I was probably one of the first to really get into hip-hop in my record store, but you couldn’t even play it in the store because it wasn’t ‘shop friendly’,” she recalls.

She’d lived in Melbourne for a while, having moved to attend the Victorian College of the Arts, when a future opened up. One night in 2000, her friend Chris Gill, owner of Northside Records in Fitzroy, reached out to see if she would like to take part in a club night he was running at The Lounge nightclub. Inspired by the plot of the recently released High Fidelity, the night saw staff from record stores around Melbourne come together and play their favourite soundtracks, which is where she says she “caught the bug”.

“I was like ‘Oh my God; this is like being on a stage, which I love as an actor, and music. What the hell? This is a dream.’ From there it snowballed out of control.” 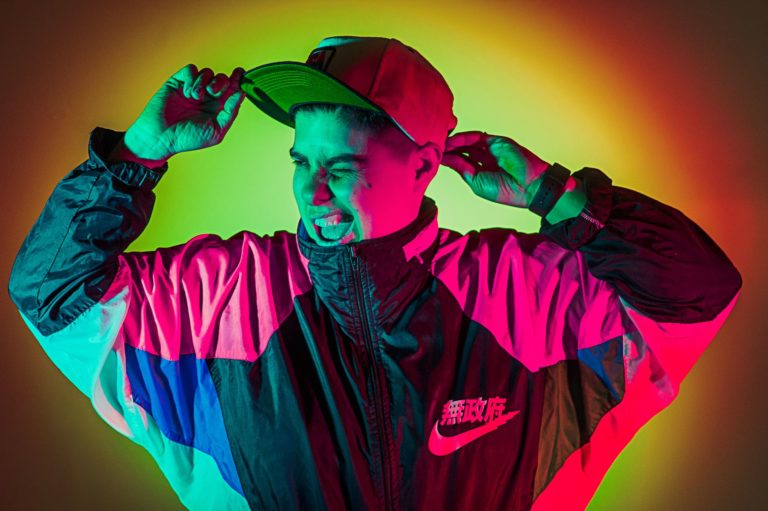 Born and raised in Adelaide, she proudly declares the year of her birth: 1973, the same year hip-hop and rap culture started.

But her love affair with the genre goes beyond the decks. When she was 12, a family friend returned from abroad with a record for Junior M.A.F.I.A., with a poster inside titled Learn How to Breakdance – the way it was done before YouTube came along. A keen gymnast, she gathered a crew, and as Fluoro Breaker went on to win one B-Girl competition after another.

When she started to break into the scene as a DJ, the urban scene in Melbourne was fairly underground, pioneered by the likes of DJ Dexta, DJ Kuya, and DJ Peril.

“These guys were putting on hip-hop nights in Melbourne and they were very hard core into turn tabling, a lot of scratching, a lot of tricks, and Peril especially had a lot of party music, so I used to go to their gigs all the time,” she says.

“I remember going up to Peril in the late 90s and I actually handed him a cassette, a mix-tape I had made, and said ‘Please listen to it! I want to be a DJ like you.’ And it happened.”

Since her record store days, her beloved hip-hop has well and truly developed with its own sub-genres, going on to become mainstream. Being apart of this evolution, Yo! Mafia says that there is a parallel in her career as a DJ, which has also evolved.

While she is well-known for old school R’n’B and hip-hop, she says she realised early on that you can’t just stick to one formula, but must keep moving to become more accessible.

“Back in the mid 2000s I kind of decided the music which I was playing, underground hip-hop, wasn’t really translating on the dancefloor. I went back and started listening to what my brothers played, which was Van Halen, and Bon Jovi; my parents listened to Lionel Ritchie and Stevie Wonder. So I’d incorporate that music into my DJ set and then my sets became quite broad in a sense, so I never pigeonholed myself in hip-hop clubs or gay clubs, I just played any party,” she explains.

“I kind of moved with the times, and haven’t stayed stuck.”

Yo! Mafia has gone to play sold out gigs around the world, supporting some of the music industry’s biggest names, including Missy Elliot, De La Soul, Snoop Dogg, Stevie Wonder, Izzy Azalea, and Salt ‘n’ Pepa to name a few, and has just come off an Australian tour with TLC, Boyz II Men and Blackstreet playing to crowds of 15,000 people.

“It was just incredible. It’s really amazing to be on the same level, hanging out with these people who were such pivotal artists in my life. So it was pretty intense,” she says.

But it hasn’t always been smooth sailing for the entertainer, who says that supporting artists can be a “double-edged sword.”

“Sometimes the promoters will pitch it to you as ‘This is a once in a lifetime opportunity for you, so you’re going to do this, pretty much for free and you’re going to get to be on the same stage as them’. Then when you get to a certain point in your career, which I got to, I was like ‘No, I’m an artist as well and I’m bringing something to the table so I need to be compensated as well’. So I dropped off from doing support stuff for a long time,” she reveals.

But now she is well and truly back on board, having decided to get on board with Mushroom Records, a big leap for the artist, in her first management contract in 18 years.

“They’re like ‘We’re putting you on the actual tour, you’re on the flyer, you’re doing a show’. And that’s after 18 years of hustling! It could have happened 10 years ago, but it probably wouldn’t have mattered as much, so now it really does matter,” she says.

Self-driven, she says she gets her work ethic from her family, many of whom run and work in their own businesses.

“I’ve worked for companies and watched these people make millions of dollars while I slave away for them and I was like ‘This doesn’t make sense. I’m not happy; I want to do what I want to do’. But no-one’s going to give you a leg-up; you’ve got to do it yourself, and don’t wait for someone else,” she says.

While the name Mafia has Italian connotations, Yo! Mafia, or Maria as she is known among those closest to her, was raised in a Greek Australian household. Her parents born and raised in Australia, she cites having had a “very Anglo upbringing” not having been sent to Greek school, but says she now, wishes she did: “we always wish it when we’re older . . .”

Of course many may be wondering where the name Yo! Mafia originates, and again stems back to her time working in the record store.

“It’s the funniest story; I’ve told it a hundred times and it’s still funny. We would buy records in good faith that they weren’t stolen. On one occasion, chasing stolen goods the police came in, saw my name in the book and an officer asked to speak to a Mafia, misreading my name.
“I was like ‘Did you mean Maria?’ and he said ‘Oh, I thought your parents had a sense of humour to call you Mafia!’ and then he just kept calling me Mafia. At the time I had just started DJing and was looking for a DJ name!” The name has since evolved to be Yo! Mafia, inspired by a US TV show from the 90s Yo! MTV Raps, the first breakfast show dedicated to hip-hop clips. The name had further appeal, given its gender neutrality. With very few women DJs on the scene, she says she wanted to be seen “as a DJ, not a female DJ” and over the years has managed to achieve just that. But while she counts herself lucky to not have experienced gender bias, the 44-year-old says ageism in the club scene is in full force.

“Playing in a club where your demographic is 18 and your friends want to come to the club and the promoters are like ‘That’s not going to happen because we don’t let over 30s in our club’. Yeah but you know how old I am! That’s when I was just like hang on, something’s not right. I’d never experienced anything like it, I was just so offended. It was not on, and I just removed myself from the situation and just didn’t play at that club anymore. That’s not how I operate, and it’s not how any club should operate to be allowed in,” she says.

“That kind of stuff really upset me, and I did go through a period of wondering what I was going to do, because it’s a young person’s game but I have been able to keep reinventing and these new opportunities keep arriving.”

Over the years, Yo! Mafia has made a point of keeping her work persona, and personal life separate, choosing to conceal her full name from the public.

But as she speaks about her life on the stage, she can’t help but gush about those closest to her; her parents, her brothers, the people who were always there in the background as she set out to find who she was.

“My parents were very supportive; it was a big move for them to let me come to Melbourne on the cusp of 18 – their youngest daughter, their only daughter – to move here to pursue acting by myself. I think they struggled with it,” she realises.

“But I remember my mum saying ‘We couldn’t not give you the opportunity we were never given and sit back and not let you find who you are; you were a square peg in a round hole; you had to go’.”

And while she’s had the opportunity to meet and perform on the stage with some of the world’s biggest names, nothing tops her parents and brother watching her perform three weeks ago on a massive stage in front of 12,000 people.

“My dad took me to all my acting classes when I was younger, and we’d talk about when I’d be famous, which is so funny because they finally came to see me at TLC and Boyz II Men and I was able to take them backstage; it was the best feeling ever,” she says.

“To see them finally connect with what I do. I’ve built a career, I’m an artist, and I did it all on my own merit. I just had to do it all, and that’s the best way to do it; the gratitude is a lot stronger then.”