Nick Polites: a life in jazz

At 90 years of age, the jazz musician has yet to retire, having managed to retain a rare authenticity and freshness

Nick Polites was a stellar performer with various ensembles at the 72nd Australian Jazz Convention in Ballarat at the end of 2017.

The longest running event of its type in the world, it has been held around Australia between Christmas and New Year every year since 1946.

The inaugural convention was held at the Eureka Hall in North Melbourne, which belonged to the Eureka Youth League, the youth arm of the Communist Party of Australia, who saw the jazz scene as an opportunity to recruit young members. This was subsequently reflected in the early eastern European and China tours of the late Graeme Bell’s band. Like Bell, Nick is one of the few Australian jazzmen to continue performing into his 90s.

In December 1946, a young Nick appeared at the first convention with the Frank ‘Doc’ Willis Band which featured trumpeter Manny Pappas. Nick has subsequently performed at nearly every convention since; with the exception of when he was touring overseas.

Nick Polites, OAM, has made an incalculable contribution to Australian jazz culture. Steadfastly true over a lifetime to original classic jazz, he is our ethnic New Orleans keeper of the flame – a living national treasure.

The child of Greek migrants, Nick was born in Melbourne in 1927. His first conscious exposure to music occurred at age 11 in 1938. A childhood friend – Denis Athenis – loaned him Louis Armstrong’s Hot Five and Hot Seven recordings. Hearing 10-year old recordings like West End Blues for the first time was an epiphany which set the young Nick out on his life’s journey in the jazz world.

At first, Nick’s parents resisted his pleas to purchase him a musical instrument; they were concerned music would be a distraction from his schooling. Eventually, after four years, they relented, and in 1942 Nick got his start on a second-hand alto saxophone. Barely able to play, Nick was performing with amateur bands at church dances almost immediately. He puts down his early pre-proficient opportunities to the scarcity of older more accomplished musicians who would have been in military service during WWII. But Nick was a natural with a good ear; he learnt fast. Even before acquiring an instrument he had memorised many of the tunes that would become his initial repertoire. By 16, in 1943, Nick had earned enough from these fledgling performances to buy his first clarinet; and he never looked back.

Like the early African American jazzmen, Nick was unschooled in music. He is entirely self-taught and to this day plays by ear and does not rely on written music at all (he describes himself as a ‘slow reader’ of sheet music). Today Nick carries a vast repertoire of tunes in his head.

Nick had his jazz heroes, such as George Lewis, but did not model his playing style on any one of them in particular, he developed his own jazz voice informed by the classic Creole-style of clarinet playing. As one reviewer proclaimed, he is “the real deal”. Louisiana Creoles were the decedents of mixed French and African American heritage.

Parental concerns about his academic future were unfounded; Nick went on to graduate from the University of Melbourne with four degrees in Commerce, Languages, and Arts; and, later in life, a degree in Social Work. He also quickly moved on to clarinet as his preferred jazz instrument.

At university, Nick performed with amateur campus-based and other semi-professional jazz bands; among them the Varsity Vipers and then the Doc Willis and Alan Bradley bands. His big break came in 1951 when he joined Melbourne’s leading professional jazz band Frank Johnson’s Fabulous Dixielanders. In Australia this band was rated second only to Graeme Bell’s Sydney-based band. The Dixielanders were Melbourne’s pre-eminent jazz band of that time. The year before Nick joined them, on 1 October 1950, The Dixielanders were the wedding band for my parents and played several Greek tunes in the jazz genre!

In 1954 Louis Armstrong and his band visited Australia for the first time and the Frank Johnson Band played to greet them disembarking from their Ansett flight on the tarmac of Melbourne’s Essendon airport. The entourage were invited back to Nick’s parents’ place for a welcome party. That evening Armstrong invited Nick to play with his world famous All Stars band in the Polites’ family home! 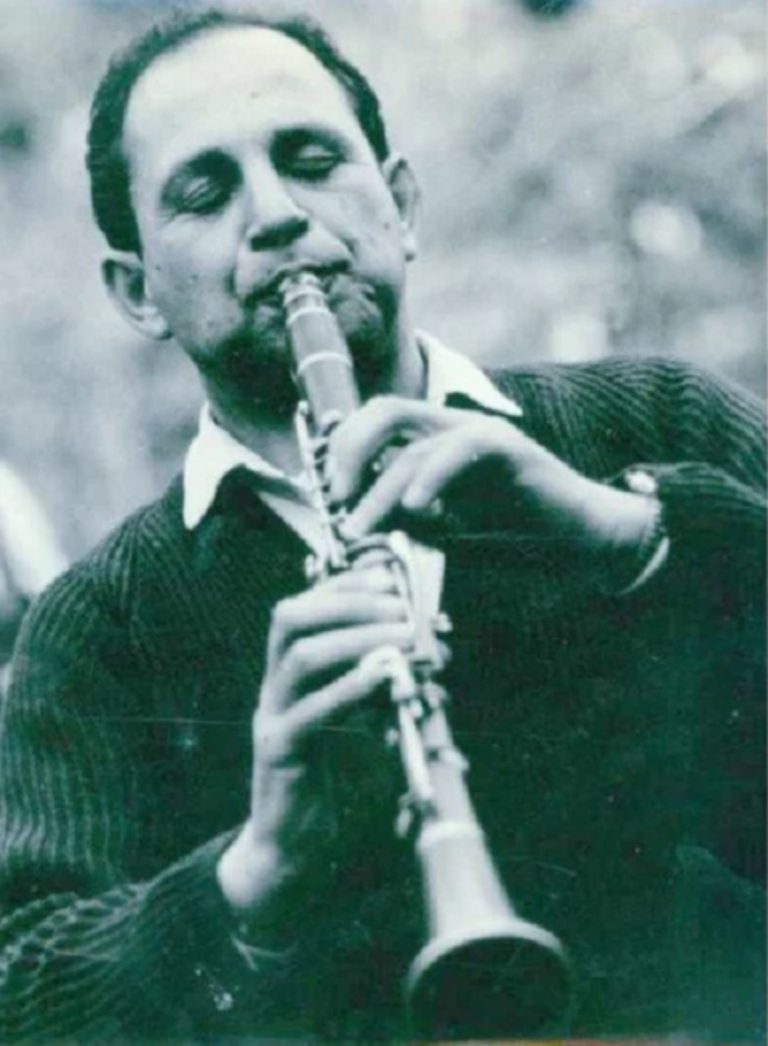 After leaving the Dixielanders, Nick teamed-up with Llew Hird, and later with English folk-blues vocalist Peter Shiells, and still later with German migrant Mookie Herman on double bass. Their appearance at the 1957 Australian Jazz Convention was a fillip to their popularity on the jazz scene. With Llew Hird’s departure in March 1958 leadership fell to Nick. They were renamed the Melbourne New Orleans Jazz Band.

From September 1961 the band toured extensively in the UK, Ireland, and Germany until disbanding in London in April 1963.

Then, after a first visit to Greece, Nick embarked on his first of many pilgrimages to New Orleans. On arrival in ‘The Crescent City’, Nick made his way to Preservation Hall in the French Quarter and bumped into one of his jazz heroes – George Lewis – standing in the courtyard of this now iconic venue. They had previously met in London and George said to Nick: “I’m playing tonight, come along and join in”. Thus Nick became a regular at Preservation Hall for three months and then continued with performances there on subsequent visits.

During this time Nick even filled-in for George Lewis in his regular band when George had overseas performance commitments; and when George was in town, he and Nick played clarinet duets. Nick’s ‘Mediterranean appearance’ meant he was presumed by many locals to be of Creole descent; which aided in side-stepping the local segregationist public policy at that time.

Nick must have felt he was in jazz heaven! He was playing with his idols: George Lewis, Kid Howard, Jim Robinson, George Guesnon, ‘Slow Drag’ Pavageau, Cie Frazier, and Dolly Adams on piano. In subsequent years Nick got to perform with the likes of Dizzy Gillespie, Thelonious Monk, Art Blakey and he befriended iconic performers like Mahailia Jackson.

Nick returned to Melbourne just in time for the 1963 jazz convention at the Kew Civic Centre. Early in 1964, Nick joined the popular Yarra Yarra Jazz Band as their leader for a couple of years; and he re-joined them after a spell. He moved on to team up with Sydney jazzman Geoff Bull for European tour and his second visit to New Orleans where he was establishing his reputation with African American players and audiences who continued to presume he was a local Creole.
On returning to Melbourne in late 1966 Nick formed his own New Orleans Stompers which played for another five years.

He continued with various bands through to the formation of the Louisiana Shakers in 1994, and has been a fixture around the Melbourne jazz scene since, touring extensively around the UK and Europe nine times. Nick performed his last gig with them on Christmas Eve 2017. Nick has felt particularly indebted to the late Ashley Keating who led The Shakers and organised their overseas tours around the UK and Europe. The Shakers have been recognised as one of the true “keepers of the flame” of the authentic ethnic New Orleans jazz style.

On graduating from university in the late 1940’s Nick had taken-up the CEO position with his family’s confectionery manufacturing business through to its sale in 1971. Fortunately his brother-in-law was able to step in to manage the business when Nick was on tour overseas. After the sale of the family business, Nick moved into the migrant services sector as inaugural director of the Australian Greek Welfare Society. He was a member of the 1979 Galbaly Committee whose seminal migrant services review and recommendations laid the public policy foundations for Australian Multiculturalism.

In 1981 he was awarded an OAM recognising his contributions in this field of his endeavours. 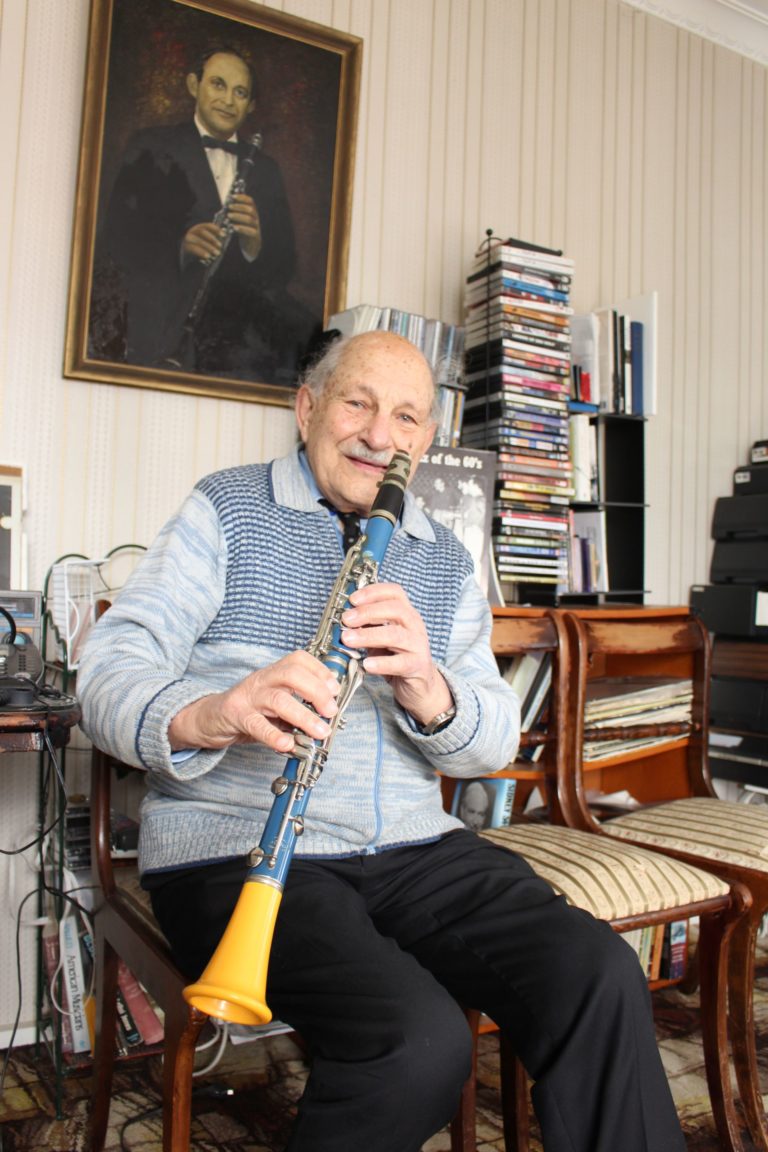 Looking ahead, Nick has not retired from performing all together. While no longer in a regular band, he will be popping up from time-to-time as an elder statesman of the Australian jazz scene, as he did at the Ballarat convention last December. At 90 years of age Nick’s playing is still hot. It retains a rare authenticity and freshness.

Neos Kosmos readers are encouraged to hear and see this living legend of our Australian jazz community whenever the opportunity arises.

In recent times, Nick has generously donated thirty albums of memorabilia, many photographs, recordings and videos to the Australian Jazz Museum, which is working through this wealth of material to ensure it is carefully preserved for posterity.

Visit the Australian Jazz Museum and explore the resources on its website at ajm.org.au