Greek Australian Police officers met with the leadership of the GCM 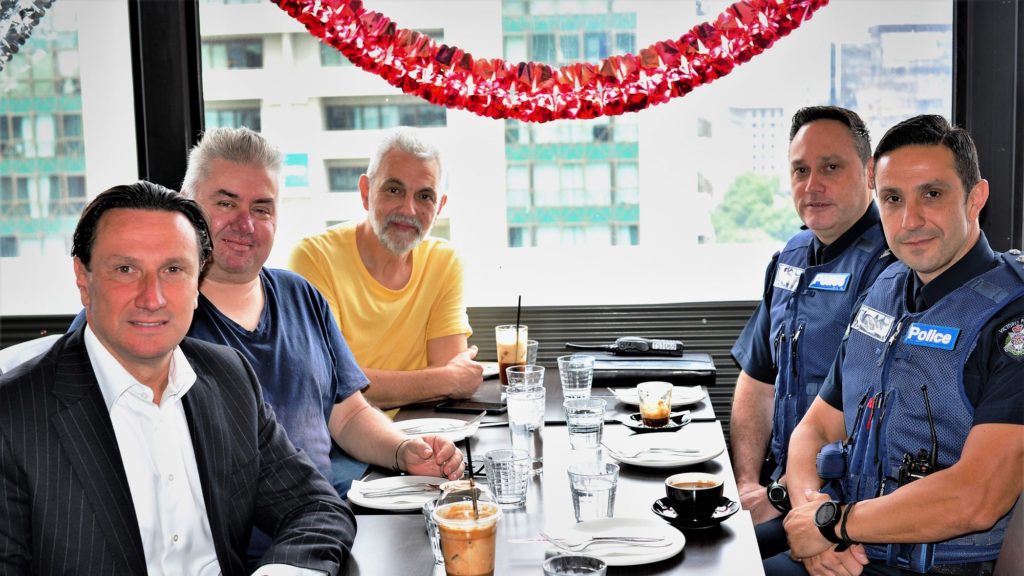 The President of the Greek Community of Melbourne and Victoria, Bill Papastergiadis, with board members Jorge Menidis and Kostas Markos, and Greek-Australian Victorian Polie Officers Andrew Markakis and Efti Anastasiadis.

Two of the leading Greek organisations in Victoria, the Greek Community of Melbourne and the Victorian Hellenic Police Association, confirmed their strong ties recently in a series of meetings in the organisations’ respective headquarters. The Greek Community of Melbourne was represented by its President, Bill Papastergiadis and General Secretary, Kostas Markos, while the Victorian Hellenic Police Association was represented by its President, Acting Inspector Andrew Markakis and Vice-President, Sergeant Efti Anastasiadis.

During the meetings both parties got to present their goals and targets and explore potential further collaboration and mutual support. A/Inspedtor Andrew Markakis expressed his support for the recent course of actions that the Community has undertaken, while explaining that the Hellenic Police Association is one of the largest unions within the Australian police and its reach keeps expanding.

“The Victorian Police has more than 400 members of Greek background, who are offering their services to our state on a daily basis. In collaboration with the Greek Community of Melbourne, our union tries to build further trust towards Police.”

Both Mr Papastergiadis and Mr Markos expressed the will to further continue the collaboration between the two organisations.

“We congratulate the Greek Police Officers of Victoria for their iniative to further collaborate with the Greek organisations and specifically with our Community, to organise seminars targeted to the Greek community, and to allow for the Victorian Hellenic Police Association to use the Greek Centre for their functions,” Mr Markos said.