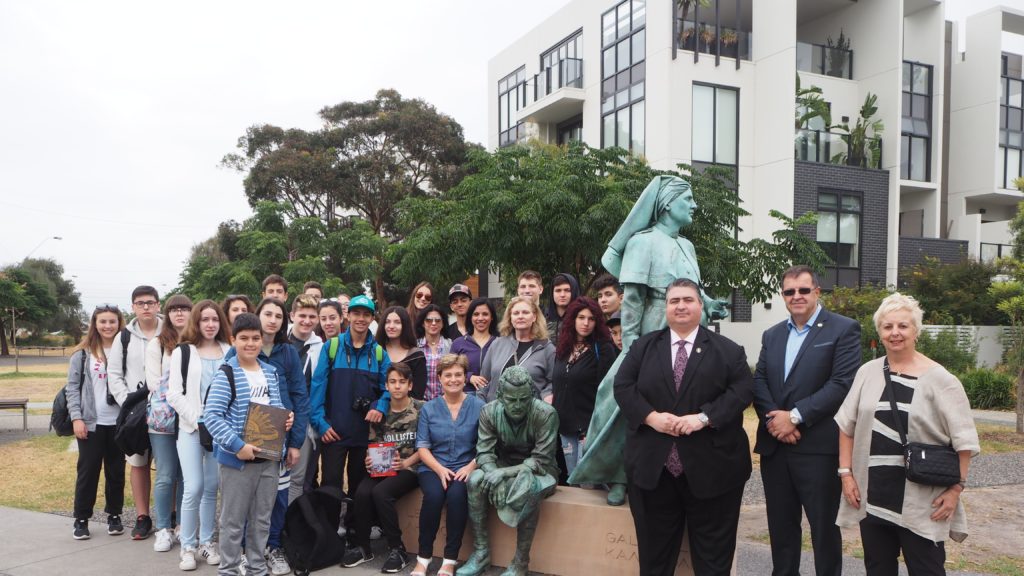 The 22 year 9 students from the 1st Junior High School Voula Athens are visiting Melbourne this week and their sister-school Alphington Grammar. They were accompanied by three members of the teaching staff – Principal Dr Maria Kaskantami, the Vice-Principal and Information Technology Teacher Ioanna Gardiki and Angeliki Methodiou, the English Language Teacher. They are being assisted in their visit to Melbourne by Ms Christina Despoteris, Vice-President of the Lemnos Gallipoli Commemorative Committee.

They were welcomed at the Lemnos Gallipoli Memorial in Albert Park by Mr Lee Tarlamis, President of the Committee and a number of Committee members, including Anzac veteran descendent Ms Deb Stewart and Mr Angelo Yannacaros. Lee explained how the Memorial was conceived and created, re-counting his own personal family story, with both local Lemnian villagers and Anzac soldiers as his ancestors. Mr Jim Claven, Secretary of the Committee provided a brief historical outline of the significance of the Anzac experience to Australians as well as the Hellenic connection to Anzac.

The visit coincided with the placement of the new Lemnos Square information board, explaining the naming of the location of the Memorial as Lemnos Square.  On behalf of the Lemnos Gallipoli Commemorative Committee, Mr Tarlamis presented the teachers with a commemorative book from the Australian War Memorial and a box of Commemorative Anzac Biscuits featuring the Anzacs on the Acropolis in 1941.

Each tour participant was also presented with a unique booklet by Ms Despoteris on behalf of the Committee, telling the story of Lemnos’ link to Anzac and detailing the work of the Lemnos Gallipoli Commemorative Committee in both Australia and Greece. This includes reports on the creation and unveiling of the Memorial in 2015 as well as the Lemnos Gallipoli Photographic Exhibition which will be displayed at Victoria’s Parliament House in August this year.

The students were then taken on a tour of Melbourne’s Shrine, with Shrine volunteer Ms Shirley Devery conducting the tour. It was particularly poignant given that Shirley’s father served during the Greek campaign in 1941, being captured on Crete. The students were impressed with Shirley’s explanation of the “Gallipoli boat” in the Shrine’s display galleries, and that her telling of the story of Australia’s youngest WW1 volunteer, Private Jimmy Martin, who was about the same age as the students on the tour.

The tour included a visit to the Shrine sanctuary and the crypt, which lists many of Australia’s military units and places served, including the Australian nurses who served at Salonika. Mr Claven pointed out the many classical motifs included in the construction of the Shrine – from its overall structure based on the Mausoleum of Halicarnassus, the classical columns and pediments, star of Vergina and Acroterion motifs.

The students were also shown the olive tree planted in commemoration of the Battle of Crete and the Man with a Donkey memorial, where they heard the story of the stretcher-bearers who helped the wounded and sick diggers at Gallipoli, including John Simpson. The students were interested to hear that Simpson’s donkey most likely came from Lemnos.

The students were interested to learn about the significance of the poppy in Australia’s remembrance activities. It was very touching to see the students place symbolic poppies in the Shrine’s Remembrance Wall. The tour concluded with a picnic lunch in the grounds of the Domain.

Ms Despoteris said that it had been a pleasure to assist the student’s visit to Melbourne, building on her visit to the school in recent years to encourage the e-twining of this school with Alphington Grammar. She is hoping to build on this relationship with the linking of Lemnos’ Mudros Secondary College with Albert Park Secondary College in Melbourne.

“Mudros’ Secondary College has already connected with Victorian students visiting Lemnos as part of the Premier’s Anzac Student Prize Tours and will do again in October this year for the commemoration of the Armistice of Mudros. Our Committee is also working on the recent Victorian Government grant for educational aids for Mudros. We hope to build on these links with an e-twinning between Mudros and Albert Park, the home of our Memorial,” she said.

The students have been busy visiting the magnificent sites of Melbourne and participating in educational and other fun activities at Alphington.

Jim Claven is a historian, freelance writer and published author. He has been researching the Anzac trail across Greece for many years and is Secretary of the Lemnos Gallipoli Commemorative Committee.