The philellene writer and war hero donated his estate to the Benaki Museum, which now grants his wishes The house of Patrick and Joan Leigh Fermor in the idyllic coastal town of Kardamyli has always been a haven for artists and intellectuals, who came from all parts of the world to visit the author – one of the most influential travel writers of all time – and spend time under the bright Greek sun.

Now this legacy is to continue, as the property, arguably one of the finest villas to be found in the Peloponnese, if not throughout Greece, is setting up to become a cultural centre and an artist hub, under the auspices of the Benaki Museum and the Stavros Niarchos Foundation.

The Leigh Fermors decided to donate their estate to the Benaki Museum in 1996, following the advice of their friend, Tzannis Tzannetakis, the late former provisional Prime Minister and naval officer, who translated Fermor’s seminal travelogue ‘Mani’ while jailed by the military dictatorship for his resistance actions.

His children, Tonia and Petros Tzannetakis are now overseeing the fulfillment of the bequest, after Leigh Fermor’s demise in 2011 (his beloved wife, Joan, died in 2003), making sure that the staff selected by author himself have been retained to ensure that the ongoing care of the buildings and surrounding area continues on a daily basis.

Apart from that, since 2011 all archival material found in the house has been delivered to the executors of the will and the National Archives of the United Kingdom, as stipulated in the will, while artworks and valuable books have been transferred to the facilities of the Benaki Museum in Athens for conservation and safekeeping, until completion of the requisite repairs. 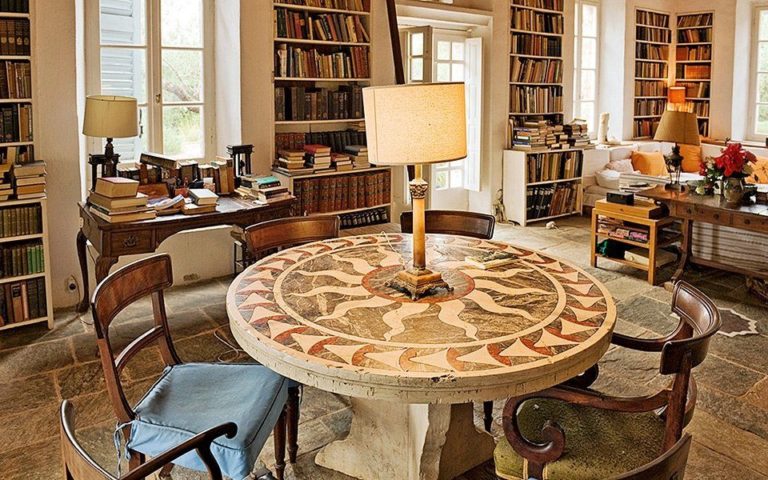 According to the couple’s desire, expressed in the bequest agreement, the house is to be used to host intellectuals and scholars (writers, researchers, artists, poets, etc) who are looking for a quiet and hospitable place to work. And there probably is no better place for this than the villa, comprised of three discrete low stone buildings, designed by the architect Nikos Hatzimichalis and surrounded by a beautiful Mediterranean garden with cypresses, olive trees, shrubs and wild flowers.

The property was donated as a contribution to the Benaki Museum’s mission, and an acknowledgement of the significant work it has done for the preservation and promotion of Greek culture throughout history. After all, both founder Antonis Benakis and his daughter Irini Kalliga were personal friends of ‘Paddy’ and Joan Leigh Fermor. In order to carry out the will, the Benaki turned to the Stavros Niarchos Foundation which agreed to fully cover the repair works and the restoration of the House. The two institutions set out a joint plan for the Patrick and Joan Leigh Fermor, which will operate as a space for honorary hosting of notable representatives from the fields of literature, the arts and other fields; hosting of young writers and scholars for work and research purposes; organization of higher-educational activities in collaboration with Universities and institutions in Greece and abroad; organization of educational and cultural events for the general public and residents of Kardamyli; scheduled tours of the property, focusing on the donors, the history of the house and its use by the Benaki Museum.

In order to cover the running expenses of the house, the Benaki Museum has the right to lease the property for a period of three months per year. On Wednesday, the Museum officially announced its collaboration with Aria Hotels, a hotel and villas company that specializes in the provision of authentic retreats in restored, historic Greek properties. Aria Hotels will undertake operation of the property during the rental period, providing hospitality services, from 2020 onward. The House remains closed to the public for the moment.