The woman in the photograph accompanying this text is captured in that act of bidding goodbye to her sister. As her sister is long gone, the young woman, now an old lady, can barely remember her sibling, which is why she is conspicuously absent from the composition.

Yet her absence and the trauma of separation, symbolised by the blood red handkerchief which assumes the form of a flow of life blood, is omnipresent. Somehow, that flow of blood is supported and sustained by the absent, presence existing without the photograph, as a surrogate umbilical cord of recollection and nostalgia.

Furthermore, it denotes a flow of blood that has not yet been stemmed; a continuous wound flowing through time itself. 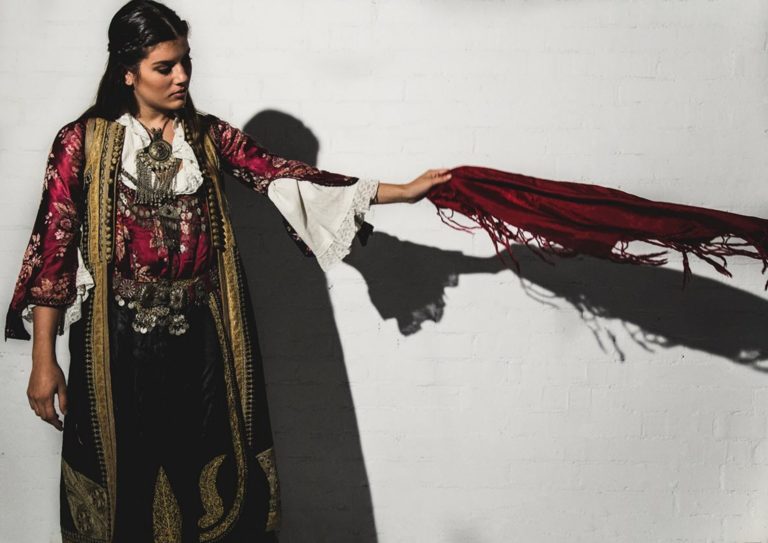 In this photograph, memory and present conflate. Behind and adjacent to the very real image of the sorrowful young woman is her shadow: a crisp, clearly defined, yet colourless negative of the recollection. Are we witnessing the scene from the point of view of the young woman bidding her sister goodbye, or rather, from the perspective of the absent sister, her memory of her final parting from the sibling she left behind having become eroded over the years into a brooding shadow? 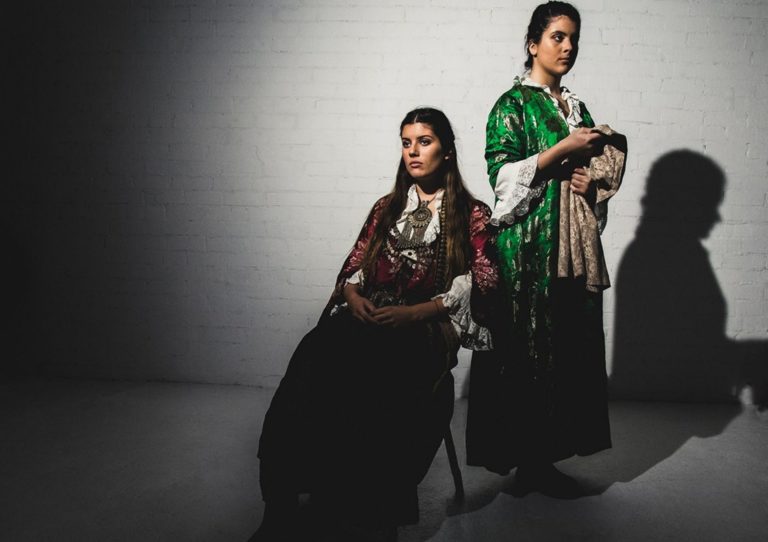 Rewind a frame and the two sisters now occupy the scene. Resplendent in traditional clothes from Epirus, they are immortalised during the course of one of the sister’s wedding. Noticeably, the two have their backs to each other and face opposite directions, symbolic of the fact that their lives are, from this date forward, going to take diametrically opposing turns. The sister who is to remain behind, laden with jewellery gazes mournfully at the viewer. Her shadow points towards the right, indicated a solitary future, sundered from her sibling. Her sibling, whose wedding day it is, has no time for the introspection displayed by her sister. Her face, through the passage of time, is obscured and she is captured in the moment of tossing a blanket, ostensibly part of her dowry but also denoting a ‘magic carpet’ of future aspiration, a conviction that her marriage and planned emigration to Australia offers her a viable path towards a golden future. Her shadow melds into that of the blanket, as if to prophesise that she herself shall become inextricably one with the migrant experience and shall be defined by it. A frame prior to that, the sibling who is to migrate, wears a traditional wedding crown. The expression on her face is one of confident resignation. Her sister clings to her tenuously and apprehensively, as she glances at us anxiously. A sense of urgency and despair is granted to the image by the shadow, commencing at the foot of the photograph and gradually but inexorably spreading upwards, as if to envelop them.

The artist Arshile Gorky dealt with the loss of his mother during the Armenian genocide by painting her portrait and then disfiguring her hands and face, the only parts of her that he remembered.

The spreading darkness, heightening the nervous tension of a coming separation has a similar effect here.

As it stands, the background of each photograph is stark and white, connoting the traditional lime-washed houses of post-war Greek villages and the sparse and spare lives of the post-war Greek migrants, and, most importantly, a palimpsest, a blank slate, an endless future of possibilities that can be written by all, or by none. It is possibly this absence of background, that allows the viewer, the subjects of the photographs and the photographer to contextualise, juxtapose and decontextualise each image and each shadow of each image in disconcerting and challenging ways.

Acclaimed and talented fashion photographer Roi Tziotzis has taken a break from her usual work, in order to create a photographic narrative encapsulating the loss and enduring trauma occasioned by the experience of Greek immigration to Australia.

That narrative is inspired by the loss of her grandmother, an inordinately significant presence in her life and it is one that informs most Greek Australians’ understanding of their heritage and identity, hence its enduring relevance so many decades after the initial emigration of Greeks Down Under.

Roi pays homage to her grandmother in the next photograph of the narrative which subtly increases the dramatic tension of separation: the married sister holds ‘western’ clothes. Once she dons them, she finds herself in a completely different world and context, as her sister, still in traditional garb, symbolises, by looking away from her towards the opposite direction. In this photo, time and memory for the sister who is to remain behind, coalesce at that moment. She has no shadow. The shadow of the migrant sister hauntingly escapes towards the end of the scene. 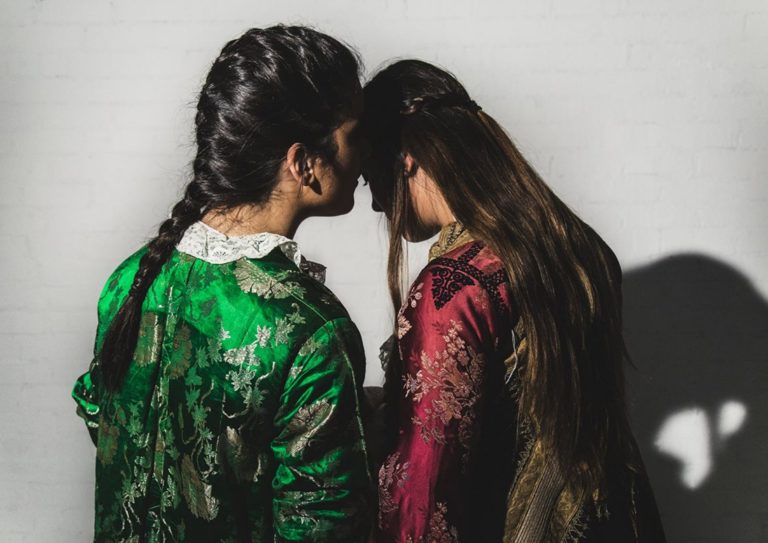 In one of the most evocative of a series of farewell photographs, the migrant sister, prior to donning her western attire, consoles her sister by holding her close. Separated in the previous scenes, here both, whose faces cannot be discerned, meld into one, as do their shadows, cleverly, revealing only, in the mingling of their shades, a love heart, in the process of breaking in two.

In the frames leading up to the final farewell, the migrant sister has put on her western clothes and thus assumed her role as a migrant. 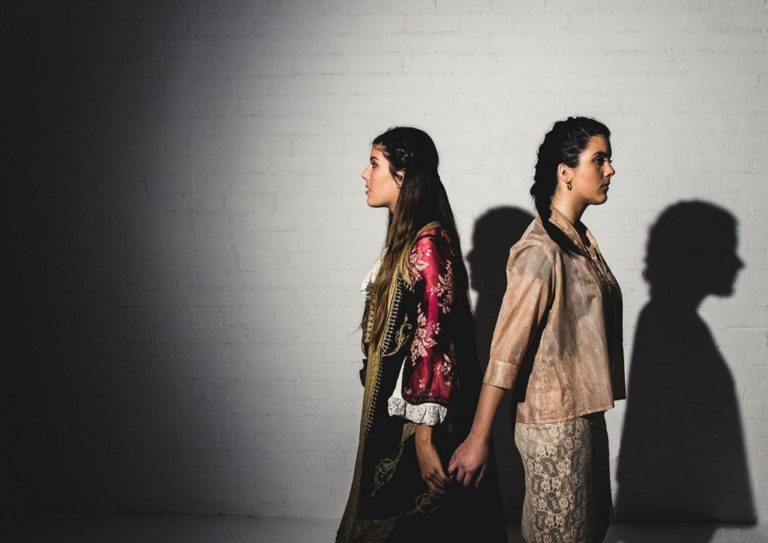 The clothes belonged to Roi’s grandmother, as does the jewellery, emphasising a personal link with continuity and an identification with the migrant experience. Separated by the clothes they wear and a markedly different fate, the two youthful women facing in different directions are united tenuously for one last time, via a bare touch of their fingertips.

Their faces express disbelief and grief and then the married sister is gone, creating a wound that will last forever.

It is difficult not to stereotype the migrant experience, or burden it ideologically as a rags to riches narrative. Herein lies the genius of Roi’s pictorial discourse.
In her sensitive and inspired approach to the foundation myth of our community’s existence, she chooses to focus solely on key emotions that are overlooked when assessing or seeking to understand our community’s foundation members: grief and loss. If we are to understand the manner in which people cleaved to form the structures which comprise our community, if we are to appreciate their communal ethic but also comprehend the level of dysfunction that inevitably came to imbue it, we can only do so through a nuanced treatment of the huge and largely unspoken psychological burdens that formed part and parcel of the process of migration. 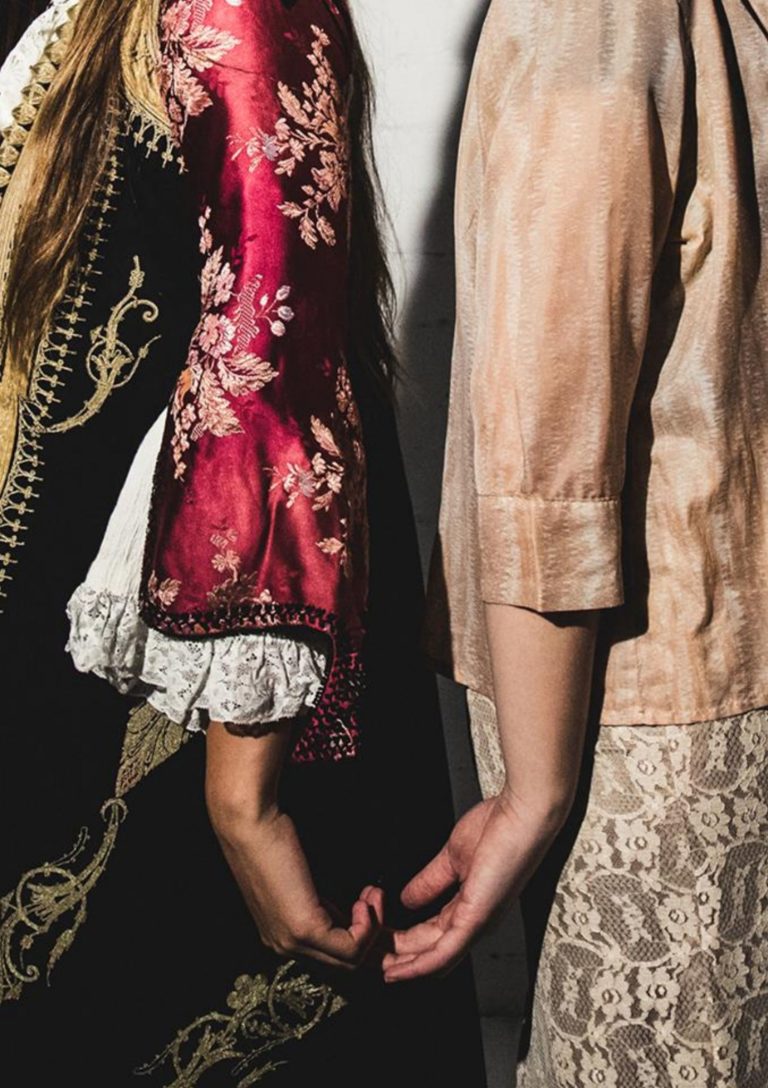 In choosing to portray her protagonists both as youthfully women and as shadows, Roi generously challenges self-created stereotypes of the ageing first generation of Greek migrants, encouraging later generations to identify with their youthful aspirations, hopes and fears, juxtaposing happy ever after myths of migrant affluence with the eternal pain of separation, and to grapple with how memory can ossify, distort and erode narratives, which maintain a shadowy existence within our collective consciousness, shaping in ways unforeseen, our sense of identity.

Tziotzis’s pictorial narrative is a highly significant and original treatment of the psychological dimensions of the multi-faceted migrant condition.
As the first generation gradually passes into history, her efforts are timely, as that passage, taking with it a multitude of myths, stereotypes and ultimately the meaning of migration to those left behind, will, as she depicts, cause us all to feel the loss, dislocation and grief that the photographer so presciently portrays.