Celebrating Easter, as if in Greece 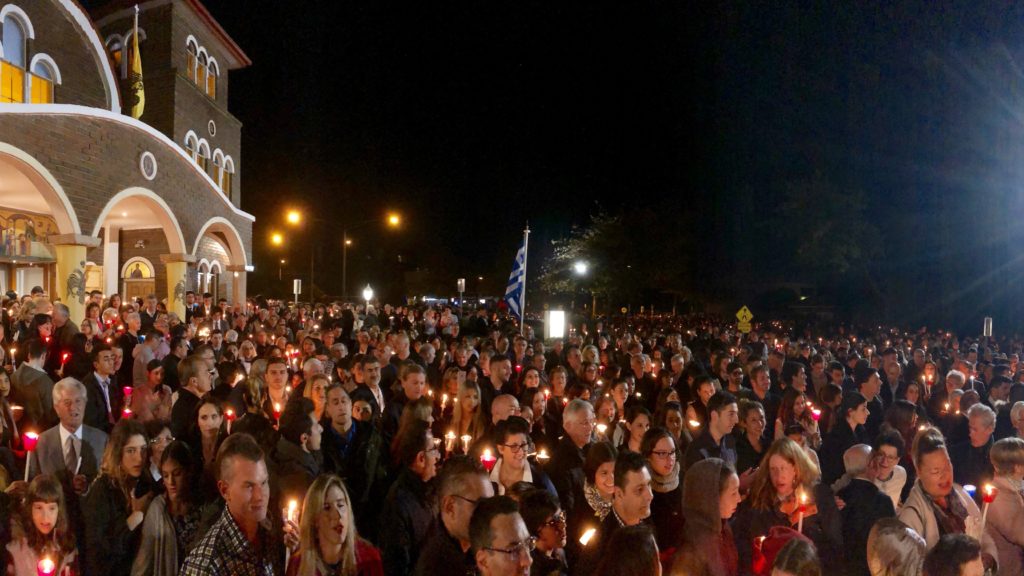 Greek Orthodox churches such as the pictured “The Presentation of Our Lady To The Temple” church in Balwyn North, saw a massive turnout by devout Christians turning to their local parishes, to celebrate the Resurrection. (Photo: Kostas Deves)

‘Neos Kosmos’ has been flooded by messages coming from all parts of Australia, reporting an impressive turnout in all Greek Orthodox churches, both during the Good Friday Holy Epitaph Procession and at the Resurrection ceremony on Holy Saturday night. This was largely due to the exceptionally warm weather conditions, allowing for dozens of thousands of Greek Australians to visit their local churches and attend the Holy Resurrection Divine Liturgy and partake in the distrubution of the Holy Light, which they carried back home.

There are more than 100 Greek Orthodox churches throughout Australia and they were all swarmed with devout Christians. The massive turnout led to the surrounding streets to also be flooded with people, attracting the attention of non-Greek residents, impressed by the sight of people carrying candles at night.

With weather conditions remaining favourable on Easter Sunday, and the temperature in Melbourne reaching 30 degrees, the Greek community had the chance to celebrate Easter as if in Greece.

The ‘Greek-dominated’ neighbourhoods of Melbourne, Sydney, Adelaide and other cities, in particular, were filled with Greek sounds, smells, tastes and colours, as people celebrated Easter with dance, music and the traditional lamb on a spit.
It is worth noting that each year, during Orthodox Easter, there is a significant surge in lamb consumption throughout Australia.

ORTHODOX EASTER MESSAGE FROM THE VICTORIAN PREMIER AND THE PRIME MINISTER

As usual, state and federal political leaders took part in the Orthodox Easter celebrations. Known for his warm sentiments towards the Greek community, the Premier of Victoria, Daniel Andrews visited Oakleigh’s Eaton Mall on Holy Friday, for “a coffee and a tsoureki,” as he wrote on Twitter.

Joined by Greek-Australian Labor MPs Steve Dimopoulos and Nick Staikos, the Premier sent Easter wishes to everyone celebrating this weekend. Daniel Andrews was also photographed carving a traditional tsoureki, surrounded by the MPs as well as the Greek members of his cabinet, Ministers Jenny Mikakos and Philip Dalidakis.

Australia’s Orthodox communities are part of this vibrant global culture, enriching our nation’s heritage of belief with traditions firmly rooted in the earliest centuries of Christianity,” reads the PM’s message, in which he sends wishes for “peace and time for reflection and celebration”.

Referring to the christian values of love, compassion, respect and forgiveness, Malcolm Turnbull stresses the importane of these values in the current context.