Young fashion designer Penelope Kokinelis is making her mark in the fashion world with her brand of colourful graphic prints. Watch this space 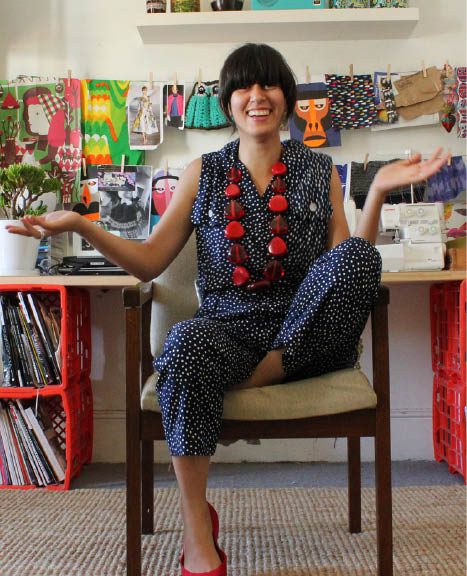 In the competitive world of fashion business, it can be hard for young designers to make it in the industry. It’s not enough to simply graduate with a diploma or degree in fashion design, often graduates need to be equipped with savvy in other aspects of the dog-eat-dog industry. It really says something about the nature of the industry when an internship at a top designers studio does not guarantee a graduate with a fashion job once they finish.

Penelope Kokinelis, who graduated from a graphic design and fashion design course at TAFE in Sydney, is one of those young designers trying to make her mark. And while many fashion graduates decide take on internships with established labels or fashion labels, the 26-year-old admits that even before she started her course, she always had her eye on starting her own business.
She did just this.

About seven months ago, Penelope decided to start her own label, Uptights, where she merged and transformed her passion for graphic design and printmaking into a collection of kaleidoscope-like leggings.

“I was very interested in designing textiles and I wanted to put my prints on some sort of medium.A lot of people like leggings, they fit easily on people, and I just wanted to test the market really.”

From here, Penelope thought it was best to take the online market route with Etsy, an online marketplace dedicate to the quirky, the vintage and the handmade. “It’s definitely helped me start up faster than if I had my own separate website. I’ve also been going to Etsy Meetups, where I get to meet other small fashion business owners like me,” she said.

A one-woman show, Penelope does everything from designing textiles, making her garments to the less glamorous yet necessary tasks of budgeting and product distribution. The designer’s business smarts have gone a long way to building up her brand. Penelope describes one of the most rewarding aspects about being in the fashion business is seeing people wear her leggings, sometimes from halfway around the world.
“I get photos from America and it’s funny to see something you’ve designed by hand in your house being worn so far away. It’s really humbling to see that!”

The designer has even earned herself a bit of celebrity endorsement. After emailing New Zealand singer Kimbra, who sent back a personal response, Uptights leggings have been seen worn by the singer as she goes on a worldwide tour. This is the kind of publicity most Etsy sellers can only dream of, but Penelope’s focus on following through her dream of setting up a fashion business from the very beginning has clearly paid off.

“I have been thinking about starting my own business before I started studying fashion design, but the course built up on the skills that I needed to start my own business,” she said.
Inspiration for her prints come from anything and everything around her (including a print based on white noise on a television screen), and the designer admits to keeping a notebook next to her bed in case ideas come to her in the middle of the night. Penelope’s decision to focus on leggings when she started has also worked in her favour, as she was able to focus her creativity on the colourful prints, while maintaining the garment’s appeal to a street-wear market. And the leggings, being a semi-outerwear, semi-underwear versatile garment, meant it could fit a wide range of people with a variety dress sense by being a “statement piece”.

“I roughly follow trends, but when I’ve got an idea I think will work, I usually just go ahead and produce it. My target market are those quirky people who want to wear something a little different. Yes, they may follow trends here and there, but they don’t want to look like everyone else on the street.”
Working alone on an online business has its ups and downs, Penelope noted. “With an online business, the shop is open 24 hours, my phone is also going off with work-related messages, so I really have to restrict my hours and set aside time to stop working, but sometimes it feels like I’m working 24/7.”

But working online also means her products are exposed to an international market right from the start, even though it is a niche market. And even online, Penelope needs to make Uptights stand out enough to catch the attention of potential buyers.

“Especially now at the beginning, Facebook and Twitter has really helped me get the brand out there. Of course, motivation and a bit of money to start off is also important,” she said.
Less than a year on since Penelope plunged into the fashion business, Uptights is already making a mark with the label’s quirky graphic patterns, and the designer clearly has a lot ahead of her.

This week, she launched a collection of cute headbands in her signature quirky patterns, and she hopes to make dresses by the end of year. But at least the late nights and the hard yards the designer has been putting in is paying off. Already, several bricks and mortar retailers have taken notice of Penelope’s debut collection, with Sydney’s Oxford St Design Store set to be the first to stock the new headbands, and several offers from Melbourne stores in the works.

Check out Penelope Kokinelis’ designs online at www.etsy.com/shop/uptightso and you can also get in touch with her via facebook at www.Facebook.com/uptights