George Ellis has great passion for Yannis Markopoulos and considers him to be one of the great Greek composers alongside Mikis Theodorakis, Manos Hadjidakis, and Stavros Xarhakos.

Ellis has conducted, composed, and arranged some of the world’s supreme orchestras and musicians and says the ‘Big Four’ are amongst some of the great musical minds of our time.

“As a performer and orchestrator of symphonic orchestral music I’ve been trained in the music of the classical composers [such as] Mozart, Beethoven, Tchaikovsky, and Mahler, and I revere these composers, they are amazing,” he says.

“In my opinion, the Greek composers are definitely to be held in the same standing as the other great composers because their works are substantial. Theodorakis’ Axion Estin and Canto General, Hadjidakis’ Gioconda’s Smile and The Free Besieged by Markopoulos to me are equal to Beethoven, Mozart, and Tchaikovsky.”

Ellis’ platitudes for the four Greek masters goes even further when he reveals that conducting the Hellenic composers provides him with even a greater thrill than the classical greats.

“There has been a capsule sent to outer space and the music they chose was Beethoven’s Ninth Symphony – that’s phenomenal. However, I’m not German. Tomorrow, I will be conducting Stravinsky but I’m not Russian, I don’t have Russian blood that I know of. I am constantly working with their music. But they are not part of my ancestry and the genetic link makes it more special even though I absolutely love the music.” After conducting the works of Theodorakis, Hadjidakis, and Xarhakos during the previous three Greek Festivals of Sydney, Ellis says that being able to perform Markopoulos has great personal significance to him.

“Years ago, I bought an album called ‘Songs My Country Taught Me’ by a Greek soprano Agnes Baltsa and she covers these four composers, and I feel in love with that album,” he says.

“I tell everybody I know about it because it’s such beautiful music. Since having that album, and I’ve had it for 20 years, it’s been my lifelong dream and my musical ambition to perform all four composers. So, this year I get to complete the four and I’m very, very happy about that.”

Markopoulos is known for challenging the status quo of how music could be put together, but what Ellis discovered about his music is that it was very much inspired by Theodorakis.

“But the more I read it, hear it and see it in front of me, the more I think that Markopoulos is paying homage to the other three, especially Theodorakis. Because Theodorakis is just a master. It’s like Mozart, Haydn and Beethoven looking towards Bach who came before them but who without Bach they would not have written the same music.”

The concert celebrating Markopoulos includes his classical symphonic work such as The Free Besieged which will be narrated by Greek Australian actor Zoe Carides. The second half features Markopoulos’ popular songs performed by Greek star Vasilis Lekkas accompanied by George Doukas whose band will be playing bouzoukia.

Ellis has been preparing for this concert for almost a year and he is expecting the audience to be blown away by the music and the musicianship on display at Sydney’s Recital Hall.

“I would be disappointed if one person walked away saying that wasn’t a world class performance,” he says.

“As well as Vasilis Lekkas we have the best musicians in Sydney, if not Australia, playing this great music. Plus, we are using the Sydney Philharmonic Choir, Australia’s best choir. It’s important we get the best people on that stage. Because the music deserves it and the audience deserves it. It’s so important for us to make this the best concert experience it can be.”

Aside from conducting the classics, Ellis’ extensive career has seen him orchestrate an eclectic range of music from The Beatles, David Bowie, and The Church.
While they are all from different eras and genres there is one unifying aspect amongst them all.

“What I revere the most in music is melody,” Ellis says. “Melody is king, melody is it. It doesn’t matter whether it’s Theodorakis, John Lennon, Gustav Mahler, what matters the most is a melody.

“When I listen to Varka sto Gialo by Theodorakis it isn’t so much the lyrics, even though they are important and lovely. It’s that the melody can be sung or it can be played on a violin, by a piano or by a full symphony orchestra or any of these combinations, so that is why I am married to a beautiful melody. 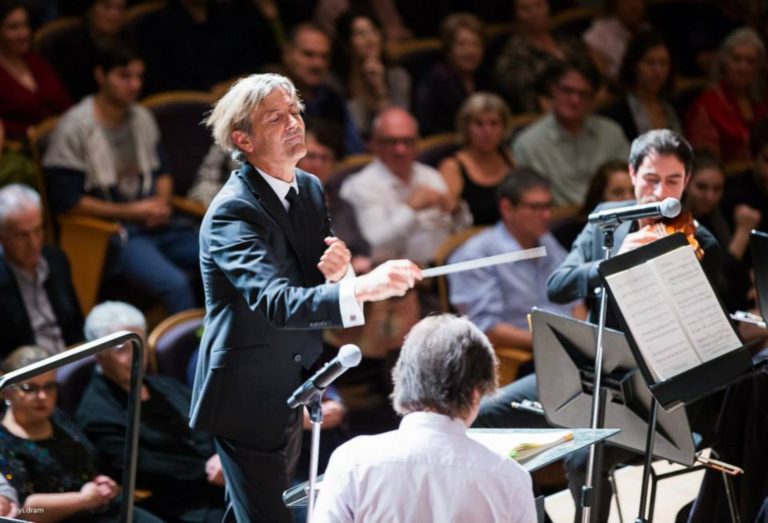 While a great concert can be a mesmerising experience, does that also hold true for the conductor? Do they feel what the audience is feeling as well? Ellis says he often gets lost in the music even though he’s hard at work.

“I think about this a lot,” Ellis says. “I could spend hours talking about this. As a conductor I still have to have my wits about me. It’s all very mechanical in rehearsal. Now in the concert I can’t stop and fix anything, I have to be in control. I don’t want to be thinking ‘is this okay? Is the audience enjoying it?’ Because if I’m doing that I’m not focusing on how amazing this music is. I can’t be thinking too cerebrally.

“But every now and then I get completely transcended into another world. I get so caught up in it that – and it may sound cosmic and a bit far-fetched – I can’t think of another way of putting it but for those moments I lose myself completely and the world stops.”

And for Ellis some performances have been so powerful that the music he has conducted has taken over time and space.

“It happened during Theodorakis’ Axion Estin and during Hadjidakis’ Gioconda’s Smile,” he says.

“It’s only when I hear the applause and I go ‘that’s right, there is an audience here’. They’re the best performances, but here is the thing, you can’t manufacture it. It only happens naturally. If you have a deep, loving relationship to the music it’s much easier for that to happen. It’s also for a number of other reasons, the music is so good and the people performing are absolutely shiningly brilliant. When I hear 40 string players play this sound to me, it’s like I can’t tell you, I don’t have the words.”